When College of Charleston faculty Deanna Caveny and Lauren Hernandez-Rubio ’14 (M.S.) first found themselves hanging upside down in midair, they didn’t know what to expect. They certainly didn’t suspect that, suspended somewhere between athletics and the arts, they’d find an interplay of physics, anatomy, movement and performance – of strategy and creativity – that would provide both self-expression and professional perspective. 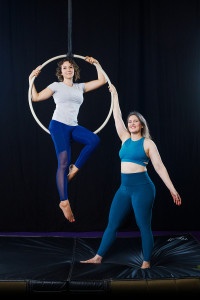 Those connections were grounded soon after they began their respective aerial arts classes at Aerial Fit studio.

“I was originally drawn to aerial arts because I love strong, graceful bodies and that’s exactly what Aerial Fit students develop,” says Caveny, associate provost for faculty affairs and associate professor of mathematics, who started her aerial journey with an aerial yoga class six years ago. “As an academic, during my years in the School of Sciences and Mathematics and now in the provost’s office, I have relied heavily on my mind, but that can be a hindrance when it’s time to log off. I wanted to become stronger physically, but I also wanted to find something fun and relaxing – a little escape.”

Rubio knows the feeling: She was working on her Ph.D. dissertation when she joined her first aerial class almost three years ago.

“I needed a break,” says the adjunct biology faculty member. “I thought this would be a good way to take some time to exercise and relax my mind in between my studies. It turned out that it would also exercise my mind in new ways. It was a brand-new way of learning for me, and has been very rewarding!”

Rubio swears that she couldn’t do even one pullup when she first started with Aerial Fit: hard to believe, considering the control, poise and grace she shows as she moves inside, outside and around her aerial apparatus of choice – the lyra, aka aerial hoop. 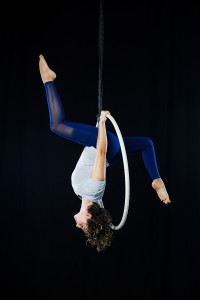 While there are four main types of apparatuses at the Aerial Fit studio – lyras/hoops, silks, trapezes and slings – there are dozens to choose from, including  supplemental apparatuses like ropes, chairs and umbrellas. Each apparatus is rigged onto the I-beams 25 feet above the ground — and each is engineered for circus arts and professionally installed.

“It never really feels like you’re too high, though, because you’re connected at all times – and you always have the control,” says Clayton Woodson, co-founder of Aerial Fit, explaining that students must master one skill before they can move onto the next – and that each skill has multiple steps. “It’s all about sequence – you can’t achieve one thing without first doing the other. It can be a slow progression, but you’re learning something new every step of the way, so you never feel out of your element.”

Besides, aerial arts performers develop a keen grasp on what their bodies are doing – giving them greater control.

“I’ve definitely seen a difference – not just in the fluidity of my moves and the strength of my upper body – but in how attentive I am to movement and how I’m using my body. I have this awareness of my body that I didn’t have before,” says Caveny. “It really connects your mind and body in a different way because you have to always be aware of how every bit of your body is positioned and engaged – and also be thinking a few steps ahead: What do I need to do next in order to transition to my next pose?” 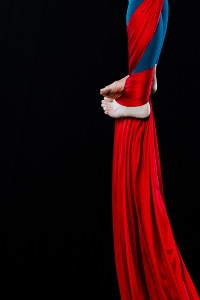 Deanna Caveny uses the fabric to suspend and propel her in her aerial silks.

This is especially true of aerial silks, where knots, aka wraps, in the fabric are used to both secure the performers and to propel them into their next move. The idea is to move seamlessly from one wrap to another without getting stuck. And getting un-stuck takes a lot of strategy.

“It makes me think about the way we learn in general: When you get into these ‘stuck points,’ sometimes you just need to break loose and start fresh – and I think that’s true of a lot of learning,” says Caveny. “It has shown me a lot of ways I’ve never learned before – you’re not just listening to the instructors, but you’re translating their instructions from your brain to your body to make sure you’ve executed the move correctly. It has made me richer and broader as a learner.”

Rubio agrees: “I love that it’s teaching me a new way to learn. Aerial arts appeals to the analytical part of my brain. The skill sets I’ve learned here have helped me in the research I do since I am using my mind in similar ways. It translates well to our mission as educators, too.” 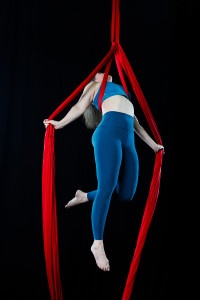 And this is where both Rubio and Caveny have seen the most crossover between the aerial studio and their College classrooms.

“There’s a lot of interplay between my work as a teacher and being a student here at the studio,” says Caveny. “Because I’m learning things in this different way, and because I’m a student, I’m getting to experience learning and teaching in a brand-new way, which really informs how I teach others. Being a student makes us a better teacher, and vice versa.”

“To me, it proves that everybody has the potential to learn and to teach – that we can all be  lifelong learners and lifelong teachers,” says Rubio, adding that she encourages anyone interested in aerial arts to give it a try. “It feels so good being able to do something I never considered a possibility – if I can do it, you can do it!”

And, if you do, warns Caveny, while occasional silk burns (aka “fabric kisses”) are to be expected, you should also “be prepared to get hooked and inspired.”

Aerial arts, after all, have a way of surpassing expectations – no matter how high they are.