Geology professor John Chadwick first began exploring Mars when he was 11 years old. His parents bought him a $5 telescope discovered at a garage sale.

The only problem was the tripod was missing a leg. No problem. He managed to find a broom handle and used it as a third leg. And that cheap telescope, he says, opened the entire universe for him.

“I used that thing on every clear night to look at planets through that little telescope,” Chadwick recalls. “Eventually, my parents realized that I wasn’t going to stop using this thing and bought me a real telescope a few years later.” 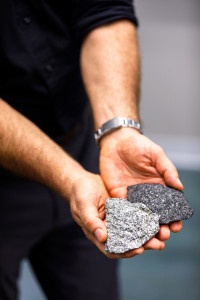 John Chadwick’s research will include the study of gabbro rock inside four Martian volcanoes. (Photos by Heather Moran)

Now as a geologist at the College of Charleston, Chadwick has graduated from that first, rickety telescope to using the resources of NASA to study Mars.

As part of a three-year, nearly $400,000 NASA funded study, Chadwick, along with researchers from Pomona College in California and the Lunar and Planetary Institute in Texas, will examine the evolution of the four largest volcanoes on Mars and determine their eruptive history and the impact they had on the Mars environment. And these aren’t average-sized volcanoes, he says, they’re supersized.

“If they were on Earth, each of the volcanoes would cover all of the state of South Carolina, along with half of Georgia and North Carolina,” says Chadwick.

Scientists estimate that the Mars volcanoes are billions of years old, but were still erupting vigorously less than 250 million years ago, which in geological terms is actually young. Chadwick says they hope to find out more about the decline in the volcanic activity and how that ultimately impacted life on Mars. Using topography data gathered by NASA spacecraft orbiting Mars, they hope to study the volume of gabbro rock inside these volcanoes and answer more questions about their life cycle. The four volcanos they will study include Olympus Mons, the largest and tallest planetary volcano in the solar system.

Several College of Charleston students will have the opportunity to work with Chadwick and his fellow researchers on this project. And studying what happened to these volcanos on Mars, he says, will help us better understand volcanoes on earth.

“Volcanoes are very dangerous.” he adds. “Being able to study them and understand their evolution is important.”

Chadwick credits fellow geology professor Cassandra Runyon, director of South Carolina’s NASA Space Grant Consortium, and his colleagues in the Department of Geology and Environmental Geosciences for helping him secure the NASA grant.