Ronald and Cynthia Thompson: A Story of 1967 Legacy Donors

Ronald and Cynthia Thompson fell in love at the University of Michigan and married in 1967, the same year that the College of Charleston integrated. They raised a family and had their careers in Michigan but retired in Charleston where Ronald has deep family roots. 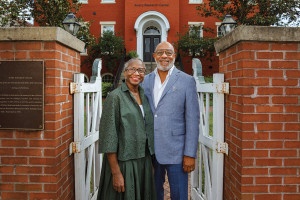 Ronald and Cynthia Thompson outside the Avery Research Center for African American History and Culture. (Photos by Heather Moran)

The Thompsons got involved with the College of Charleston when President Andrew T. Hsu asked them to join his President’s Strategic Initiatives Committee and provide counsel on how to advance the key priorities set forth in the new strategic plan, including diversifying the student body. Beyond helping President Hsu chart an ambitious course for the College’s future, the Thompsons also knew they wanted to honor the memories of Ronald’s mother and grandfather to pay tribute to their individual and collective accomplishments.

The 1967 Legacy Program presented the perfect opportunity to honor the family by supporting the education of up-and-coming Black students. The Constance Morrison Thompson and Robert F. Morrison Family Legacy Scholarship pays tribute to Ronald’s mother and grandfather who were educators and staunch advocates of Black education and civil rights.

When she married Lurie Thompson, the couple moved to Detroit where they had two children, and Constance taught elementary school for the Detroit Public Schools. Upon retirement, Constance often returned to Charleston to visit family and friends. She also conducted genealogical research, tracing her ancestors to before the American Revolutionary War.

Constance’s father, Robert “Bob” Francis Morrison, also graduated from the Avery Normal Institute. After graduating from Fisk University in 1905, Bob served as principal of the Wilson School in Florence, S.C. The low salary led him to join the Railway Mail Services, where he rose to be the Clerk in Charge of the Florence and Jack RPO. In addition to investing in properties, he opened an ESSO gas station in downtown Charleston in 1938, which he operated for more than two decades.

Always an advocate for civil rights, Bob founded the National Alliance of Postal Clerks. He also served on the founding board of the Charleston NAACP, the founding board of Avery Normal Institute and the Tuberculosis Association Board. He led the reorganization of the Cannon Street YMCA and served as the Superintendent of the Sunday School at Centenary African Methodist Episcopal Church.

The accomplishments of Constance and Bob are truly something to emulate. Now the Constance Morrison Thompson and Robert F. Morrison Family Legacy Scholarship will give future Black leaders at CofC the means make a difference in the world.