An old, beige Apple III computer sits unassumingly on a shelf of the College of Charleston’s Special Collections. The monitor, which is in good condition for its age, has two stickers clinging to the frame, one of which proclaims, “Any sufficiently advanced technology is indistinguishable from magic,” while the other, partially worn away by time, offers the remnants of the quote, “When in charge, ponder; when in doubt, mumble; when in trouble, delegate.”

These are apt words that James Rigney, the Charleston author who created the popular Wheel of Time book series under the pen name Robert Jordan, undoubtedly rolled through his mind as he worked on one of his drafts during the early part of his writing career. Rigney, who has a devoted following of fans, will now reach an entirely new audience with the Nov. 19 debut of Amazon Prime Video’s Wheel of Time television series. 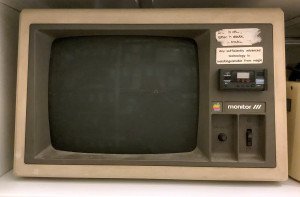 Writer James Rigney, known under the pen name Robert Jordan, worked on drafts and outlines of various books and projects on this Apple III computer, which is housed in the College’s Special Collections.

Rigney’s wife, Harriet McDougal, donated the computer, Rigney’s papers and some memorabilia to Special Collections following his death in 2007 from a rare blood disease. The collection holds both the expected and the fantastical – there are boxes and boxes of Rigney’s unpublished notes on the expansive “World of the Wheel,” promotional sketches from future card and roleplaying games and correspondence between Jordan and other authors. But it’s the assortment of 3D reproductions inspired by the books – everything from shields, daggers, swords and an axe to costumes worn by the main characters, including Rand al’Thor’s long red coat – that really brings the series to life.

“The College has been a wonderful steward, taking care of Jim’s voluminous drafts and notes,” says McDougal.

In 1990, Rigney, who was born in Charleston in 1948 and worked as a nuclear engineer prior to his career as a writer, published The Eye of the World, the first of 15 books in the Wheel of Time series. The expansive story chronicles an eternal battle between good and evil, set in an unnamed world existing both in the past and the future. With the hope of leaving his dedicated fans with the ending they had waited so long to read, Rigney recorded as much of the remaining Wheel of Time story as he could by hand and through voice recordings before he died. Then, McDougal gave those notes and recordings to young fantasy author Brandon Sanderson, whom she selected to write the final pieces of her late husband’s epic tale. What was intended to be one final book turned into three – with the last installment, A Memory of Light, published in 2013. 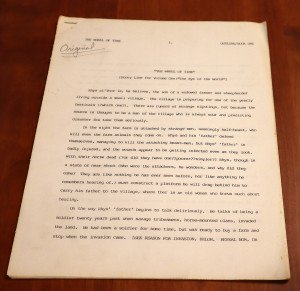 An original printed version of an outline of the first book of the ‘Wheel of Time’ series ‘The Eye of the World.’

Since the first Wheel of Time book’s debut more than 30 years ago, the series, which is considered one of the bestselling epic fantasy series since The Lord of the Rings, has exploded in popularity, inspiring video games, trading cards, a soundtrack and now a television series. Rosamund Pike plays Moiraine, an Aes Sedai, a member of the group of women who can practice magic. Joshua Stradowski plays Rand al’Thor, the protagonist prophesied to either save or destroy their world.

And with the TV series sure to reach a brand-new audience, McDougal is hopeful the show will capture the essence of Rigney’s elaborate world.

“It is very exciting! I hope it’s wonderful and I have every reason to believe it will be,” says McDougal of the TV series. “Rafe Judkins, the showrunner, grew up with the books and he loves them – and that bodes well. And the actress Rosamund Pike is a Golden Globe winner … and the rest of the cast is stellar.”

Next to the main staircase on the third floor of the Addlestone Library, Special Collections has created an exhibit dedicated to the Rigney collection, which will run from Nov. 19, 2021, through the spring 2022 semester. The Wheel of Time exhibit is made possible by gifts to the College Libraries. Visitors can expect to see costumes and prop weapons as well as an early draft of The Eye of the World. Addlestone Library is currently open only to CofC students, faculty, staff and alumni with an alumni access card. However, unaffiliated fans can follow Special Collections on social media (Twitter: @CofCSpec_Col and Instagram: @cofcspeccoll) for peeks at the items in the exhibit. 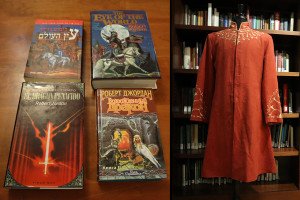 The exhibit features ‘Wheel of Time’ books published in different languages as well as a costume coat based on the character Rand al’Thor.

“It’s always exciting when Special Collections exhibits anything from the Rigney collection, even more so now that the Amazon series is premiering,” says Joshua Minor, the manager of archival processing who helped process the Rigney collection. “This exhibit will give our campus community the ability to experience some of the amazing artifacts from the world of the Wheel of Time. I’m sure we’ll have a lot of students, faculty and staff who are longtime Wheel of Time fans coming to view the exhibit, but I’m hoping we’ll also have a lot of new fans as well.”

And, although most of the collection is heavily restricted and can’t be photographed, that hasn’t stopped dedicated Wheel of Time fans from sharing information while remaining respectfully within the confines of the rules.

Theresea Gray is one of the many Wheel of Time super fans who have visited Addlestone Library to see the Rigney collection in person. In fact, she has made the journey to the Addlestone twice, once in 2014 when she lived on the coast of Mississippi and a second time in 2017 after moving to Illinois. During her second visit, she brought a friend and Wheel of Time fan from Australia to see some of Rigney’s items up close. With each opportunity to explore Rigney’s notes, correspondence and keepsakes associated with the series, Gray was transfixed by the chance to delve more intimately into the creation of the fantastical World of the Wheel.

“The experience was honestly overwhelming, both times,” says Gray, who shared some of the tidbits of what she discovered through online forums and panels at JordanCon, an annual convention founded in honor of the Wheel of Time author. “I could probably spend years just poring over the drafts with Harriet’s line edits.”