English Professor to Share a World of Insight at Winter Commencement

Simon Lewis, professor of English and speaker of the Faculty Senate at the College of Charleston, appreciates how CofC students have collaborated to keep the university safe and in operation during the course of the pandemic.

“Our students, and this graduating class in particular, have had to navigate an extremely disrupted university experience, and they have done it remarkably well,” says Lewis, who will be the commencement speaker at the College’s winter commencement ceremony on Dec. 18, 2021, at TD Arena. “The College has always striven to graduate students who have the flexibility and adaptability to operate in our ever changing world, and the success of our students over the past two years demonstrates just how agile our graduates are. I know they will be able to maneuver through the changes they will encounter over the next three to five years and throughout their careers.”

RELATED: Get all the details about winter commencement.

Lewis, himself, had to be flexible at an early age when his family uprooted from England and headed to South Africa. That experience gave him an insatiable curiosity, which the College continues to feed. Through his work at CofC, Lewis explores his specialty areas, namely the Atlantic world and African and third world literature, as well as pursues new academic opportunities. This environment of change and exploration helps him prepare students for careers in the dynamic global economy.

Lewis became a member of the College’s faculty after teaching high school English in England and Tanzania for nine years and then earning his Ph.D. in English from the University of Florida. 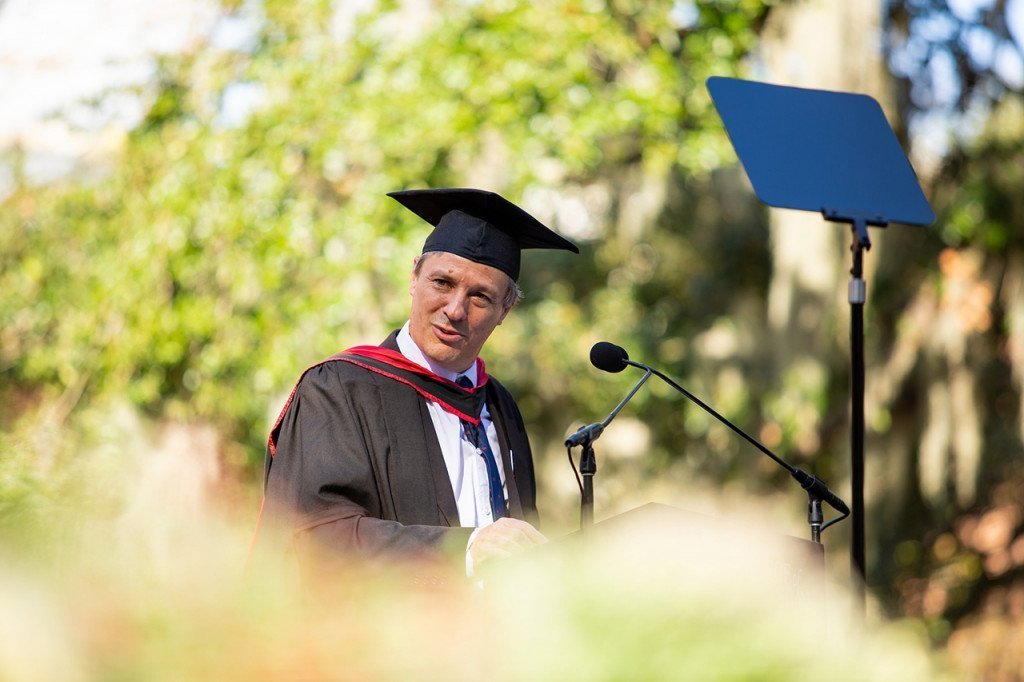 Simon Lewis speaks at the inauguration of CofC President Andrew T. Hsu in 2019. (Photos by Mike Ledford and Heather Moran)

When Lewis came to Charleston in 1996, the city felt familiar. After growing up in South Africa, he says he could feel the African roots of Charleston. He also noted how both Charleston and Cape Town have a similar history of white settlement and being formed before motorized vehicles — Cape Town in 1652 and Charleston in 1670.

Now, there is nowhere else he’d rather be than at the College of Charleston.

“I love the city and the College,” says Lewis who obtained his B.A. and M.A. in English from Worcester College, Oxford University. “Both are the perfect size and are perpetually interesting.”

At the College, Lewis, whose teaching focuses on African studies and postcolonialism with an emphasis on Africa, has taken full advantage of academic opportunities. His fascination with the Atlantic World led to his being involved with the Carolina Lowcountry and Atlantic World (CLAW) program — first as an enthusiastic supporter and then in official roles. He serves as editor of Illuminations: An International Magazine of Contemporary Writing, an annual publication that features poetry and short fiction from around the world, including some Nobel Prize winners. He has served as director of the College’s African Studies Program and the African American Studies Program. He also served as associate dean in the School of Languages, Cultures, and World Affairs for five years.

Recently, his passion and inquisitive mind led to the South Carolina Humanities Council honoring Lewis with a 2021 Governor’s Award for his scholarship and service in the field of the humanities.

Lewis credits his successes to the same types of opportunities and agility the College instills in its students and all members of the campus community. During his career he has developed a strong network of diverse people from a broad range of professions, much like CofC students do.

“Armed with all the College provides, I feel confident that this graduating class will excel,” says Lewis. “I look forward to hearing about the adventures and accomplishments of this resilient class.”