In five years, this standout Cougar earned an undergraduate degree in economics and a mathematics minor, started 30 games for the men’s soccer team, was nominated for the Colonial Athletic Association’s Leadership and Sport Excellence Award and – in a final year’s sprint – capped his College of Charleston experience with a master’s degree in data science and analytics.

It is no surprise, then, that this well-rounded 24-year-old has already found rewarding work as a technical associate/junior development and operations engineer at financial services powerhouse TIAA (formerly TIAA-CREF): the perfect merging of his economics and data science degrees.

It was economics professor Mark Witte who first introduced Gulledge to data science in a special topics class on sports econometrics.

“Dr. Witte took an interest in me and provided great advice – he pushed me to take Introduction to Data Science as a junior,” says the easygoing native of Murrells Inlet, South Carolina, who is quick to give humble shoutouts not just to his professors who inspired and mentored him at the College, but to his older sister Sam Gulledge ’15 and his extended family of coaches and teammates, as well. “That was my first data science course, and from there, I just caught the bug.” 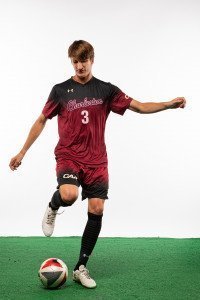 But, between his economics and mathematics coursework and his soccer, Gulledge had limited time to explore this new interest before it was time to graduate.

As COVID-19 impacted the arc of his academic career, Gulledge had to make some big decisions. The economy was shaky, and he wasn’t confident it was the right time to enter the workforce. And so, when the NCAA offered an extra year of play eligibility for student-athletes whose collegiate careers were interrupted by the pandemic, Gulledge was thrilled: Not only could he continue playing soccer at the College, he could begin a new academic challenge there, too.

And, with its research opportunities, internships and smaller class sizes, the M.S. in Data Science and Analytics program seemed like the perfect fit.

“I looked at the curriculum, and it wasn’t limited to data science,” says Gulledge, singling out two courses taught by computer science professor Ayman Hajja in particular: “I enjoyed taking Data Organization and Visualization – and then Machine Learning the next semester – because it meant I got to spend a year studying with Dr. Hajja, and he was able to get to know me. He was able to monitor the development of my skills and help me progress, and that’s something that you don’t get in a lot of programs – that kind of personal relationship between students and professors, which you can’t put a price on.”

Another highlight of his experience in the program was working with Iris Junglas, professor of supply chain and information management, to scrape data from RateMyProfessors.com and combine it with the College’s data to predict student success. He learned a lot of problem-solving and communication skills from his research with Junglas.

“Dr. Junglas also helped me edit some of my writing, and that’s an underappreciated thing – especially in the math and science fields,” says Gulledge, adding that he appreciates the way she writes. “Being a great writer is so important to be able to do alongside the research.”

It’s also important in his new job at TIAA.

“When things escalate, you have to be able to explain very difficult technical issues to others who may be working in other parts of the company, and you have to be able to explain things effectively and respectfully,” he says. “Taking a very detailed computer science problem that could potentially harm the company – and be able to highlight that to an executive or a team so that they can take action – is an extremely powerful skill.”

Another powerful skill is teamwork – something Gulledge was able to practice as an intern at Charleston-based startup SpursTech, where he worked with health and sports performance data to create a health care chatbot.

It was challenging – especially since it was Gulledge’s first real-world exposure to the security and privacy issues that come with working with sensitive health data. Not only was HIPAA a concern, but so was cybersecurity – which has continued to take priority with his work at TIAA.

“Cybersecurity is an ongoing issue, and there are multiple checkpoints in place to protect our work,” he says. “You’ve got to be careful how you send things, what you open – and being mindful along those lines is extremely important. I mean, I’m learning every day.”

“The idea was to have the chatbot give answers to new user-health queries, working from the scraped telehealth data of questions and answers that we had developed,” he says, adding that three teams of graduate students from Emory University, University of South Carolina and the College of Charleston collaborated on the project. “It was a great experience working in teams from different domains on one project.”

Working as part of a team isn’t the only soccer skill that comes into play for Gulledge these days. In fact, the habits he learned on the CofC soccer field translate directly to his success in the workplace.

“One of the most important things is accountability. Being a part of a team, if someone’s not on time, then everybody’s performance is affected. That carries over directly into a workplace that relies on collaboration,” he says. “Another important thing is communication. In soccer, there are 11 guys on the field at the same time, and being able to communicate with every member of the team is crucial. Communication with your superiors – coaches, athletic directors – carries directly over into the workplace in how I communicate with my manager, my manager’s manager, executives. And just being comfortable in these situations to collaborate and take direction is important, as well.”

Yet another habit he took from the soccer field to his job – and, before that, his graduate studies – is time management.

“Playing soccer, it’s not just training once a day and playing on the weekends. There’s training, weightlifting sessions – and then you have film and review sessions with coaches. That’s probably six to seven hours out of your day, five days a week. So, time management is crucial,” he says, explaining that he realized early on that he couldn’t start studying at 2 a.m. two days before a test.

And, because much of the College’s data science and analytics program is project oriented, those time-management skills set Gulledge up for success – and not just in his graduate studies.

“That’s exactly where I’ve also found success in my job – where I’ve been working on projects for development teams to look at. It’s not a one-week thing, not a two-week thing; it’s a multiple-month project,” he says. “Being able to look ahead and effectively manage my time and produce work with these different kinds of components and timelines: It is very similar to my master’s curriculum, especially in research – and my time on the soccer team.”

As a new employee at TIAA, Gulledge is close to completing the first of four six-month rotations across different areas of the company.

“They tell you to be a sponge, to absorb as much information as you can so you’re better able to understand how other teams work and how other parts of the company operate – how it all meshes together,” he says, explaining that he is currently working with complex data. “It’s absolutely enormous amounts of data – processed every second in parallel – that I’m having the opportunity to work with. Specifically, I’m in charge of telemetry within the team, which is the monitoring of high-frequency data. I’m just taking everything with a ‘cup half full’ approach – and learning everything I can.”

Gulledge has his eye on the cloud-based team for his next rotation.

“That’s a whole different set of terminology and skills that I don’t have much experience with, but it would be fantastic to be able to do,” he says. “Doing some machine learning in a cloud environment would be an ultimate dream gig for me. Working with financial data and providing solutions on a macroeconomic scale using cutting-edge tech – that would just be awesome.”