By Amanda Kerr|2022-02-02T12:58:32-05:00January 19, 2022|All News, Alumni|Comments Off on Alumnus’ Passion for Music Remembered With New Award
Above: Carter Holland began playing a variety of instruments, including guitar, during his childhood and teen years. Making music – and sharing it with others – is often a calling as much as it is a skill. The emotion that comes from performing an aching jazz tune or a moody, mellow indie instrumental piece is a shared experience for both musicians and listeners. That was certainly the case for Carter Holland ’19. “Carter expressed his passion and talent for music in so many aspects of his life,” says Holland’s mother, Lucie Holland, noting that he would often call his parents with the name of a new indie band, a song he had found or to talk about his favorite bands like Electric Light Orchestra and The Beach Boys. “He received as much pleasure composing and performing as he did by sharing his gifts through teaching and encouraging others to play and enjoy music.” 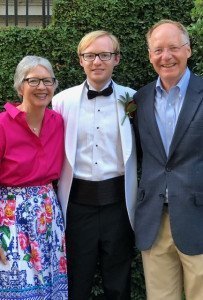 Carter Holland with his parents, Lucie and Steve Holland, during CofC commencement in 2019. (Photos provided)

When Holland, who majored in English at the College of Charleston before launching a career as a journalist with Law Street Media in Washington, D.C., passed away from cardiac arrest in 2020, Lucie Holland, along with her husband Steve and cousin Sissa Green, began thinking of ways to honor his life and love for music. They soon landed on creating the Carter Holland Memorial Music Award to assist CofC music majors in purchasing a musical instrument, musical equipment or funding ongoing professional training or study as a musician. “Steve and I – along with our cousin Sissa Green – are taking our inspiration from Carter’s qualities of leadership and compassion by providing funds to help CofC students further their music education and performing goals,” says Lucie Holland. From an early age, Holland showed an interest in making music. His first instrument, the mandolin, was just a starting point. He went on to play guitar (acoustic, electric and bass), piano and drums. When he came to the College, Holland decided to continue pursuing music as an avocation, performing with the College’s jazz ensemble as well as taking music management courses. He also found a group of fellow students and alumni with whom to share his passion outside of class, forming the indie band Cisco Kids, which played gigs around the Holy City. And one reason he decided to major in English was to find inspiration and instruction in writing song lyrics. When the Department of Music put out the call to faculty about recommending students for the new music award, music major Eric Pickford quickly rose to the top of potential candidates. 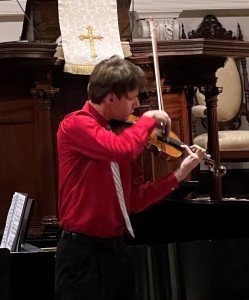 Eric Pickford is the first recipient of the Carter Holland Memorial Music Award.

“He is a quintessential renaissance man with a wide range of majors and interests,” says music professor Lee-Chin Siow, who recommended Pickford to be the inaugural recipient of the Carter Holland Memorial Music Award. “His music major alone includes violin, piano, organ and composition. By the way, his other major is computer science. Talk about overachieving!” RELATED: Donate to the Carter Holland Memorial Music Award Fund  And Pickford’s dedication to his academics, particularly his musical studies, is unwavering. “I have been so impressed by Eric’s learning attitude and aptitude,” says Siow. “He is humble, hard-working and hungry to learn. He rises to every challenge that I give him and never complains.” Pickford plans to use the award funds toward the purchase of a new violin and bow, something he’s been saving for for a long time. “I am deeply humbled, yet greatly honored to be named the first recipient of this award,” Pickford wrote in a letter to Lucie and Steve Holland. “It is a great privilege to be selected to carry on the great work and influence your son had at the College.” “We are thrilled with the selection of Eric Pickford and look forward to following his future music endeavors as well as the other award winners in the years to come,” says Lucie Holland. It’s a gift the Holland family wants to see grow and endure in memory of their son. “We hope that eventually the Carter Holland Memorial Music Award will be an endowed scholarship honoring Carter and his love of CofC permanently,” says Lucie Holland. “I am sure he would be so pleased that his legacy at CofC is that of supporting and inspiring fellow musicians.”