Pat Kelsey admits that he can be a little intense.

“I’ve been described as making coffee nervous,” he says with a laugh.

Expect to see that drive and intensity on full display as Kelsey takes over as the new head men’s basketball coach for the College of Charleston this season.

His work began just minutes after accepting the job in March 2021, when he discovered that – due to graduation and transfers – he only had three players returning from the Cougars’ 2020–21 team.

With only 10 weeks to find and recruit 10 players, Kelsey and his staff immediately had to build a team from scratch. He admits it wasn’t easy but credits his staff in finding the right players.

“They did a fantastic job identifying the type of student-athletes that will fit not only in our basketball program and our culture,” he says, “but at this magnificent university.” 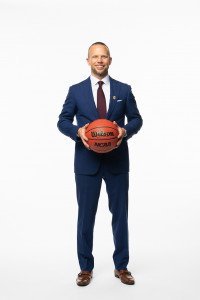 He credits his success to hard work and his basketball roots.

“There was a basketball in my crib when I was very young,” claims Kelsey, who started his basketball career as a point guard at the University of Wyoming and later transferred to Xavier. His father, Mike, also played college basketball at Xavier, while his brother and sister both played their college careers at Northern Kentucky University. “We would sit around the breakfast table in the mornings and talk about the pick and roll.”

Still today, basketball and family go hand in hand for Kelsey. He smiles when he says his wife, Lisa, is “the best recruit he has ever signed.”

And it’s no surprise that his most prized possessions are his three children, Ruthie, Caroline and Johnny.

That is why the shooting at Sandy Hook Elementary School in Newtown, Connecticut, hit so close to home – prompting him to use the press conference after a December 2012 game between Winthrop and Ohio State University to talk about the tragedy that took the lives of 26 people, including 20 children.

He went on to say, “Parents, teachers, rabbis, priests, coaches, everybody needs to step up. This has to be a time for change.”

After his statements made national news, several parents of the victims thanked him. He continued to pay tribute to them at a Winthrop basketball game the next season, when each player wore the name of a child killed at Sandy Hook on the back of his jersey.

That sense of community is a major theme for the 2021–22 basketball season at CofC. Kelsey has adopted the phrase “Our City” to signify the bond between the city and the College – and, on any given day, can be seen fist-bumping his way around Charleston, talking with both Cougar fans and soon-to-be Cougar fans.

Most importantly, he wants students know that this is their team.

“I want them to know that I need them,” says Kelsey. “When I go to sleep at night, and I stare at the ceiling, I envision a packed TD Arena with a rabid group of students making TD Arena an intimidating environment. I’m not going to sleep until it happens.”