The Charleston area is home to an impressive array of German companies such as Mercedes-Benz, Bosch and DHL – close to 25 in all.

But they aren’t the only German players in town. The women’s golf team has been stacked with Teutonic talent – 12 total – since 1999, including CofC Hall of Famer Steffi Kirchmayr (2006–09) and the best player ever, Laura Fuenfstueck, who won a record five times during her college career (2014–17).

The transatlantic pipeline is due to longtime coach Jamie Futrell’s relationship with the German National Team, good word of mouth and the school’s reputation and facilities.

“We’re close, if not equal, to what any school in the country can offer golfwise,” says Futrell. “Another attraction is the European-style feel of Charleston. The College’s program is very well-respected in Germany.”

The latest German import to come to CofC is Viktoria Hund, a sophomore who has already won twice. Her first win came in just her fourth college event last March at the prestigious Briar’s Creek Invitational on Johns Island, South Carolina, leading the Cougars to a historic win. Eight of the 18 teams in the field were ranked in the nation’s Top 50, including the University of Maryland (14th), the University of Miami (18th) and Ohio State (25th). The win was a big reason why Hund was named the Colonial Athletic Association Women’s Golf Rookie of the Year last season.

“I was just in a really good headspace in the final round because many of those in the Top 10 were European, as well, so they were familiar and I knew I could beat them,” she says without a hint of a German accent. “But honestly, my goal wasn’t necessarily winning. My main goal was just to go out there, have fun and commit to every shot.” 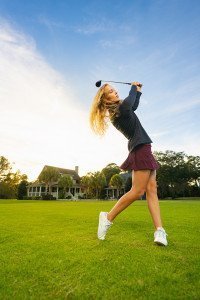 The twin daughter of two doctors who taught her early on about the correlation between nutrition and performance, Hund grew up in Bremen, Germany, where she started playing golf at age 11. She also played field hockey, but she liked the individual nature of golf where she could see the work pay off compared to a team sport where you had to rely on others. Before long, she had a junior world ranking and rose to No. 4 in Germany playing for the German Junior National Team.

At age 16, she was playing in the German Boys and Girls Open in Heidelberg, Germany, when Futrell introduced himself after the final round.

“One of the first things you notice when you see her play is what a great ball striker she is,” he says. “She has the chance to be one of the best players in the history of our program.”

Hund was excited to meet Futrell. “I never really thought about going to a different college because there’s a long tradition of German national players coming here,” she says. “I love our team. I’m really happy here.”

The business administration major, who picked up her second win in October at the Edisto Island (S.C.) Invitational (and another team victory), plans on turning pro after she graduates.

“I love the competition,” she says. “That’s what I train for and live for. I love being in situations where it can go really right or really wrong, depending on how you react to the pressure. It’s a great feeling when you’re able to withstand it and win.”

Got to love that German precision.