If you’ve lived in Charleston for long, you have almost certainly become acquainted with our unofficial mascot, the American cockroach. More politely known as the palmetto bug, this prolific pest is common in subtropical climates like our own, preferring hot, humid summers and mild winters.

From 1980 through the early ’90s, the College’s chapter of Alpha Phi Omega capitalized on the abundance of these critters by hosting an annual Roach-a-Thon charity fundraiser, with a roach race as the main event. In the nights leading up to the cutthroat competition, students clad in camo and face paint embarked on a “roach safari” around campus, using flashlights and their hands to capture the bugs as they scattered. Participants purchased the roach representative they hoped would be the fastest, and the profits were donated to organizations like the March of Dimes and the Carolina Youth Development Center.

The specimens were then tagged with colored paint and sent scurrying across a makeshift racecourse in the Stern Center Garden. Students with the fastest racer won prizes like slices of pizza, movie tickets or albums.

The roaches themselves, however, were not so lucky. After the race, cadets from The Citadel were known to execute their own tradition by eating the runners. What did they taste like? As reported in the College’s 1990 yearbook, The Comet, one cadet who reportedly ate nine of the squirming creatures described them as “bitter.” 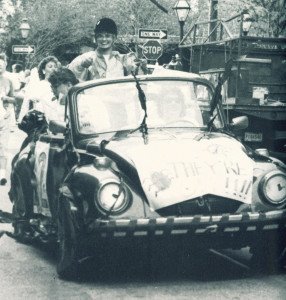 The humble race quickly grew into a weeklong extravaganza, with events like a beauty pageant to crown the Roach Queen, a concert, a “roach stomp” party and a parade. Parade floats included a pest control truck sponsored by Orkin, a car-sized rollerskate driven by students in roach costumes and a student dressed as a giant silver can of Raid insecticide spray.

Although the Roach-a-Thon was exterminated in 1993, “Charleston’s oldest residents” can still be seen scurrying around downtown after dark.