After four decades of music, art, costumes and earnest soliloquies, the only thing reverberating through the halls of the Albert Simons Center for the Arts these days is the sounds of hammers, saws and drills. The building, located on St. Philip Street in the heart of campus, closed in the fall to undergo an extensive multimillion-dollar renovation.

“This has been a long time coming, and we’re delighted,” says School of the Arts Dean Edward Hart ’88. “We are so appreciative of the College’s administration for supporting us. You know, when times are tough, very often the arts take it on the chin. And our administration has shown the foresight to really stand by us with this project, which indicates that the arts really are a priority for the College.” 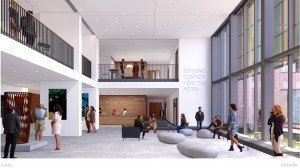 Completed in 1979, the Simons Center was constructed to serve no more than 800 students. Today, as the main hub of the School of the Arts, the facility serves more than five times that number – and, says Hart, it’s time to update the classrooms and  performance spaces as well as the building’s technology and infrastructure.

Designed by Liollio Architecture and HGA Design Firm, the reimagined Simons Center will have a bright, colorful ambiance. With large windows, a modern façade and carefully chosen brick, Hart says the entrance is meant to subtly grab visitors’ attention as they make their way from the rear of Randolph Hall to St. Philip Street.

“It will look brighter, and I think it will be more noticeable from the street,” says Hart.

Initial work on the renovation began last fall with preliminary interior demolition. Portions of the rear of the building and a section of the building near the Marion and Wayland H. Cato Jr. Center for the Arts along St. Philip Street will be demolished to make room for a new sculpture studio and scene shop as well as a new black box theater. The courtyard on St. Philip Street will also undergo significant structural changes to make way for a new front entrance.

“Construction will run through 2022, and major completion of the building will take place in the spring of 2023,” says Brad Weiland, senior project manager for CofC’s Facilities Management. “The project is tentatively scheduled to be fully completed and turned over to the College in time for an estimated opening for the fall 2023 semester.” 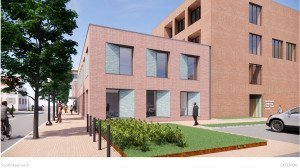 scene in lockstep with the school’s new slogan, “The Artistic Heartbeat of Charleston.”

“There really isn’t an artistic institution in this town that we aren’t somehow involved with, whether it’s a direct relationship or partnership or whether it’s our graduates or our faculty members,” says Hart, noting the school’s connections to Spoleto Festival USA and the Charleston Symphony, among other performing arts organizations. “I think it’s time for us to claim that Charleston is an arts city, and we’re at the heart of it.”

State of the Arts