By Erin Perkins|2022-02-23T11:52:59-05:00February 7, 2022|All News, Campus Life|Comments Off on ‘TIME’ Magazine Includes Photography Professor’s Images Among Best of 2021
Above: An image by Elizabeth Bick of counter-protesters in October of 2021 outside the U.S. Supreme Court at the Women’s March and Rally for Abortion Justice. This image is one of two by Bick that was recognized by TIME magazine’s editors. When TIME magazine’s photography editors looked back at the year 2021 through images, they wanted to pull compelling shots that really exemplified the tumultuous year in politics, pandemic woes and everything else happening around the globe. Their final selections included two images shot by College of Charleston photography professor Elizabeth Bick. Bick’s work was among those selected for “TIME‘s Best Photojournalism of 2021” and “TIME’s Top 100 Photos of 2021.” In October of last year, she took photos of protesters and counter-protesters outside of the U.S. Supreme Court at the Women’s March and Rally for Abortion Justice in Washington, D.C. She came back with several arresting images of attendees at the event, which led to two of those shots being included in the magazine’s selection of the year’s best photos. 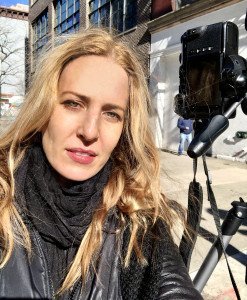 Bick is in her second semester as a professor at CofC and teaches Advanced Photography, Intermediate Photography and Digital Photography. “I am moved by how sincere the students are at CofC, with truly unique perspectives on the world and a creative enthusiasm that is palpable,” she says. In her work as a professional photographer, viewers may notice that Bick uses light to accentuate emotion and as a means to punctuate a scene. “I’ve developed a strong practice of blending artificial and natural light in an almost invisible process,” says Bick, noting she hopes to pass her knowledge from her years as a visual artist to her students. While TIME lauds Bick’s photojournalism skills, she says she still prefers to refer to herself as an artist first. “Many people don’t realize that photography has always been and always will be a fluid medium that straddles many applications,” she explains. “I love photography for its history of artists who have also worked for publications, from Walker Evans to Dora Maar to Gregory Crewdson.” 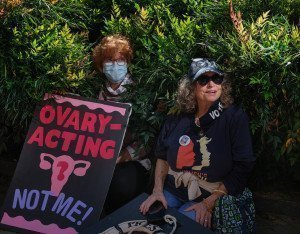 This image of protesters at the Women’s March and Rally for Abortion Justice is one of two photos by Elizabeth Bick to be recognized by TIME magazine as among the best of 2021.

Her first photojournalism assignment was for The New York Times, photographing a dress rehearsal at The Metropolitan Opera. Bick was instantly inspired by the fast-paced nature of assignment work, which was quite different from the art world. From there, her work as a commissioned photographer flourished. She has been on assignment for The New Yorker, The Atlantic, The New York Times Magazine and Harper’s Magazine, among others. Bick has exhibited at the Norton Museum of Art, the Ogden Museum of Art, Fraenkel Gallery, Houston Center for Photography and the University of Texas Visual Arts Center. She has received a variety of grants and awards ranging from the Pollock-Krasner Foundation to the Houston Center for Photography Fellowship to the Joan Mitchell Foundation to the Rudin Prize for emerging photographers. She has participated in the Summer residency at American Academy in Rome, Ingmar Bergman Estate Artist Residency, La Napoule Foundation residency, Lower Manhattan Cultural Council workspace and a Santa Fe Art Institute residency. Bick will be the featured artist at the College’s Halsey Institute of Contemporary Art’s Meet the Maker event on Feb. 15, 2022. The event, which will be both in-person and virtual, is open to postmodernist members of the institute. In January 2023, Bick will display her work in a show at the Halsey Institute.