Of all the scientific names that have been given to our planet’s species, “Tyrannosaurus rex” may be the most famous. Which name do more kids recognize, the king of the dinosaurs or that of our own species: Homo sapiens? The dinosaur, of course.

Paleontologists have been digging away and identifying skeletons as T. rex for more than 120 years. In a new study published in the scientific journal Evolutionary Biology, researchers have sifted through all of those skeletons and reconsidered what it means to be T. rex. The study puts forward the new hypothesis that, while all those bones do belong to “Tyrannosaurus,” they may not all be “rex.” 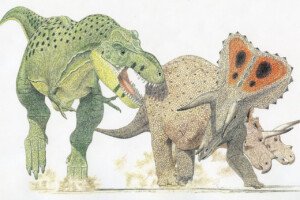 “The name Tyrannosaurus rex, or T. rex for short, has two parts,” says Scott Persons, a College of Charleston geology professor and an author of the new study, explaining that “Tyrannosaurus – that’s the ‘T.’ – is the name of the genus. The ‘rex’ identifies a species within that genus. Normally, it’s a dinosaur’s genus name that everybody knows: Triceratops, Stegosaurus, Velociraptor. T. rex is an exception. We all know the full name, genus and species. Maybe that’s because the species name is short and sweet; maybe it’s because the full name is so evocative and just plain fun to say.

“It’s a cool name – it has what I’d call rex appeal,” continues Persons. “But maybe not every Tyrannosaurus deserved that rexy name. Within a genus there are usually multiple species that vary from one another. We Homo sapiens share our genus with many hominid relatives – like Homo neanderthalensis, Homo erectus and Homo habilis – but there has only ever been one recognized species of Tyrannosaurus.”

Winner of the College’s top mathematics honor, the Ewa Wojcicka Award, Van Raalte is a mathematical prodigy who got to work crunching numbers and helping to analyze the data statistically.

To confirm that something unusual was going on with Tyrannosaurus, the team compared the variability of the data to that of another large carnivorous dinosaur: Allosaurus fragilis. Unlike the Tyrannosaurus data, which came from fossil sites scattered across the continent, the 14 Allosaurus fragilis skeletons all came from a single spot: the Cleveland-Lloyd Dinosaur Quarry in Utah. Being from one spot at one point in time, the Allosaurus skeletons are assumed to be one species. Sure enough, the Allosaurus data were far less variable, indicating the differences in heft observed in Tyrannosaurus were beyond what should be expected in just one species.

When the team went on to compare the skeletal proportions of Tyrannosaurus with those of its closest relatives (other two-fingered tyrannosaurids like Albertosaurus, Daspletosaurus and Tarbosaurus), the Tyrannosaurus data still came out as unusually variable. But there was another big surprise.

“For about half the specimens,” Persons says, “the proportions are far more gracile [skinny] than what you would expect for a tyrannosaurid or other carnivorous dinosaur of that size. That confused the heck out of me. Tyrannosaurus is the biggest of the tyrannosaurids, so you’d think it would be the most robust.”

As animals get bigger, their bones have to support more weight and endure the forces imposed by their heavy bodies while moving. But, big heavy animals tend to be slower, making it harder to chase and capture prey.

“Instead of adapting their bodies to deal with the greater physical constraints, it’s as though the animals were adapting to deal with greater ecological constraints,” says Persons. “Rather than compensate for the greater risks and strains of growing big, the gracile Tyrannosaurus has a leaner frame that may have helped it maintain athletic performance even at large size.”

Finally, the team divided all the Tyrannosaurus specimens up based on time. A few patterns emerged. No gracile Tyrannosaurus skeletons were known from older, lower rocks layers, and neither were specimens with just one chisel-like tooth set. All the gracile specimens were from a younger point in time and also had a single set of chisel-like teeth. This, the researchers argue, suggests that the burlier and double chisel-toothed form found in the older layers was one species that gave rise to another.

Some new names were in order.

But what about Tyrannosaurus rex? Well, the gracile T. regina was not the only Tyrannosaurus of its time. Also found in the younger rocks were burly specimens, but unlike the older T. imperator, they all also bear only one chisel-like tooth set. It is to this third group that the first-discovered skeleton named Tyrannosaurus rex belongs.

The Tyrannosaurus fossil record spans badlands across North America and over 1.5 million years.

“From an evolutionary perspective, that’s a long time for one species of large, warm-blooded predator to remain unchanged,” says Persons. “Natural selection often leads to expanding diversity. Today, lions and leopards are two species of the same genus that live together, as are grizzly bears and black bears. I think it’s unlikely that all our Tyrannosaurus specimens represent a single species. The challenge is trying to tell them apart.”

Will the new research lead museum curators to rush out and re-label their skeletons? Persons doubts it, at least in the short term.

“In paleontology, all species names represent hypotheses,” he says. “After all, no amount of romantic lighting or Barry White will reveal to you which Tyrannosaurus fossils could mate and yield fertile offspring. But, like any good scientific hypothesis, ours can be tested. As new Tyrannosaurus skeletons are found, we can check if they fit or defy the three proposed species and associated traits. That will make the next discovered Tyrannosaurus skeleton all the more exciting.”