Overseas and Overjoyed: The Return of Study Abroad

Trujillo is back. After a two-year pandemic pause, the College’s vaunted, faculty-led study abroad program resumed in January.

“The successful return of the current spring 2022 program in Trujillo is due to the extensive coordination and planning of the staff of the Center for International Education [CIE], the Office of the Provost, the Office of Legal Affairs and the Xavier de Salas Foundation, which hosts our students, to revise and implement numerous safety protocols to ensure the safety of our student participants, the faculty program director, professors, host families and Trujillo community members,” says Mark Del Mastro, associate provost for academic and international programs and professor of Hispanic studies. “It’s most befitting that our return coincides with the completion of the 25th anniversary of the College’s programming in Trujillo, which is only possible because of the original generous gift and ongoing support of Esther Ferguson, the program’s founder.”

Located southwest of Madrid about 60 miles from the border of Portugal, Trujillo, Spain, was the home away from home for Ferguson and her late husband, Jim, who donated their residences to CofC in 1996. But, because of the pandemic, the College community never got the chance to celebrate the 25th anniversary last year. 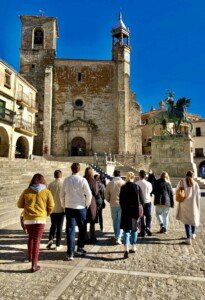 “I’m very excited, indeed,” says Antonio Pérez-Núñez, an associate professor of Hispanic studies who is directing the program on site. “Two years ago when the pandemic began, we never thought that the situation, and all the restrictions that came with it, would last this long. In my case, the uncertainty was always there until we finally arrived in Trujillo.”

Faculty live in the former Ferguson residences, while a restored convent is used for classroom instruction. But perhaps the best learning experiences for the dozen or so students every year take place with their host families or on excursions throughout Spain with the faculty program director.

“What makes this program so unique are the host families and the special connection that the students develop with them since Day One,” says Pérez-Núñez. “Also, Trujillo – as a small, rural town with its rich culture and history – provides a very unique space for our students to discover new customs and traditions and to develop new knowledge and perspectives that, in most cases, stay with them for the rest of their life.”

Students take a full load of courses, with classes Monday through Thursday, giving them time to travel on extended weekends. The current cohort has already visited the nearby towns of Cáceres and Mérida, as well as Córdoba, Granada and Seville in southern Spain. 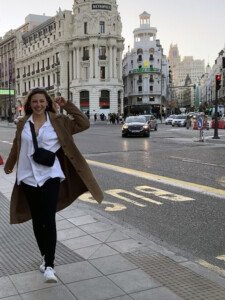 Daylon Murphy, a junior at CofC who is studying in Trujillo, Spain (Photo Provided)

“It’s such a special experience to be able to travel with a professor,” says CIE Director Melissa Ochal. “The students are able to connect on a different level with their study abroad faculty member. For many students, I’ve seen that connection and bond continue for years afterward through a continued mentorship.”

Students like Daylon Murphy, a junior international business major double minoring in Spanish and hospitality and tourism, for example. One of her favorite things to do is go to the plaza with her friends to talk with locals along with tourists who come from all over Europe.

“I have fully immersed myself in the culture and language, taking my Spanish to the next level,” she says. “This has been a super effective way to learn and practice the everyday conversation skills that I have previously learned in the classroom. This trip has been everything I have wanted from a study abroad trip: good friends, good food and even better conversation.”

Kit Fischer is a freshman studying Spanish education and taking five Spanish-related classes this semester, all taught entirely in Spanish. 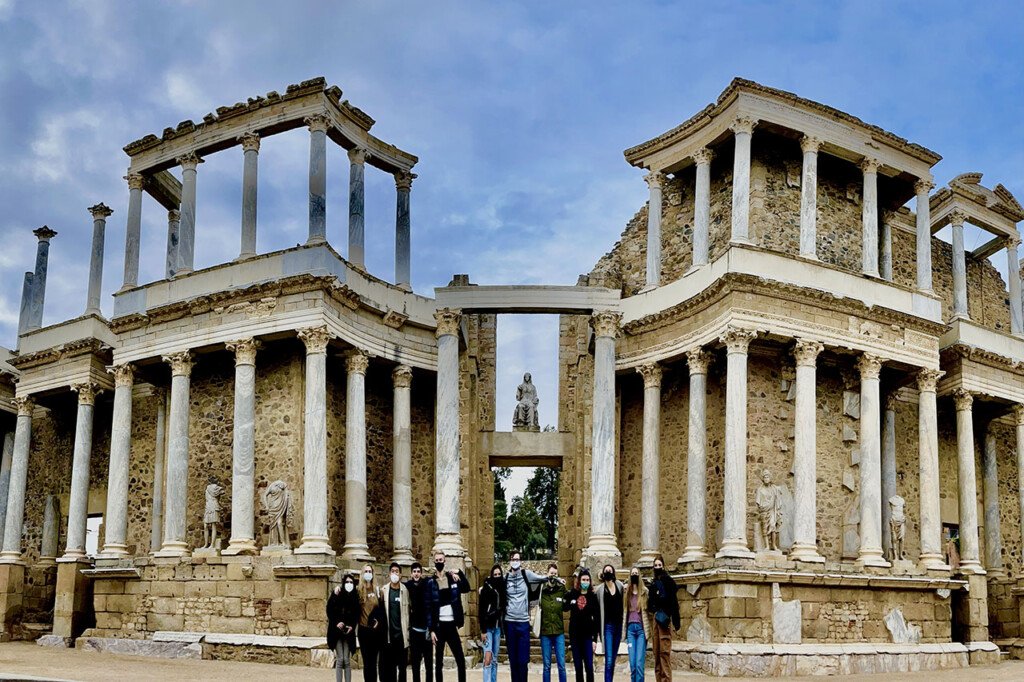 “At first, I was a little intimidated to be learning an entire semester’s worth of content in Spanish, but the professors are very patient,” he says. “In just the first three weeks alone, my Spanish has improved a lot, so I’m able to keep up in class more than I expected I would.” 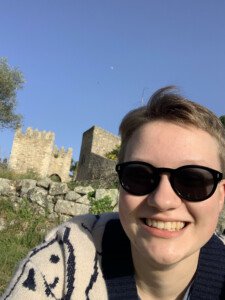 Kit Fischer with La Coria in the background (Photo Provided)

He loves his host family, who’s been involved with the program since it began 25 years ago, and is captivated by Trujillo’s beauty.

“The pictures on the internet don’t do the town justice,” he says. “As I walk through the historic plaza, hike through the scenic countryside or even just walk the halls of the Coria to get to class, I remind myself that this is, in fact, real life and not some amazing dream. I’ve told my friends back home that if I stopped to take a picture every time I saw something beautiful, I would never stop taking pictures.”