Sam Norton ’16 (M.S. ’21) was waiting tables at a local restaurant when he first heard about using salt-tolerant plants to make sustainable aviation fuel. He was intrigued that the same salt-tolerant plants he pulled from marshes and ate as a child could also benefit the environment – and soon he was consumed by the idea of a new business venture built upon the seawater agriculture and this succulent halophyte.

“One thing that you hear from a lot of entrepreneurs is they have an idea that they can’t not do. This was one of those ideas that I kept thinking about and I had to get it down on paper and try to make it exist in real life,” says Norton. “And that was when I came back to Charleston and said, ‘I’m going to do this; I’m going to apply to grad school, start a business and see what happens.’”

What happened was this: Norton, who majored in political science as an undergraduate, enrolled in the Environmental and Sustainability Studies (EVSS) Program at the Graduate School, University of Charleston, South Carolina to pursue a master of science in environmental and sustainability studies and started a business growing different species of salt-tolerant plants.

The edible plants were maintained at a horizontal outdoor farm on Johns Island and sold to customers who provided great feedback. Back on campus, his thesis advisor, Professor of Biology Dan McGlinn provided him lab space to conduct research.

“The needle would never have moved without Dr. McGlinn’s support,” he says.

But the needle moved – a lot – and eventually Norton had a product that was both well-researched and profitable: sea beans.

“I grew up calling the plant sea pickles, but there are a bunch of names for it, like sea beans and Gatorade grass,” says Norton, adding that – of all the names he’s heard for the (Latin) genus Salicornia – “salt daddies is probably one of the weirdest.” 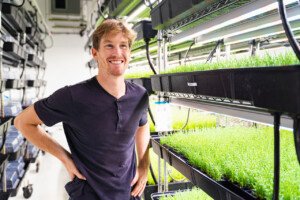 Call it what you will, the plant is one of the most salt-tolerant terrestrial plants in existence – and it’s at the root of what eventually became Heron Farms, Norton’s award-winning company that has gained him national recognition on the Forbes 30 Under 30 list and in Smithsonian Magazine. The world’s first indoor vertical saltwater farm, Charleston-based Heron Farms grows sea beans year-round without any natural sunlight or fresh water.

It then harvests them and puts them into small plastic packages like the ones fresh herbs come in at the grocery store. They are then sold to Charleston restaurants like Basic Kitchen, Chubby Fish and FIG – and to local stores, including the Veggie Bin, Lowcountry Street Grocery and the New York Butcher Shop. Recipes for dishes, like sea bean chicken salad, are included on the Heron Farms website.

Norton says sea beans “taste like the ocean” and can be used as a salt substitute in the kitchen.

Part of Heron Farms’ mission is to restore one square foot of marshland for every pound of sea beans sold. The company is committed to creating a sustainable agricultural system and restoring marshlands by using Earth’s most abundant resource: seawater.

Heron Farms is involved in several restoration projects – and not just in the Lowcountry. In fact, in 2020, Norton traveled to Bangladesh to meet the Bangladeshi Ministry of Agriculture with the goal of turning abandoned rice paddies there into edible salt marshes. For years, rising sea levels had degraded the once-productive paddies in Bangladesh and surrounding countries, but, within months, the farmers at the pilot sites were harvesting salt-tolerant plants and selling them at village markets.

The success of Heron Farms and its partner farmers is a direct reflection of Norton’s own success. And that’s something for which Norton credits his time at the College of Charleston – particularly the mentorship he received from Wesley Burnett, associate professor of economics, and the classes he took with Mark Long, professor of political science.

“Faculty will tell you that that moment when students ‘get it’ is one of the most gratifying in any course,” says Long, “In Sam’s case, seeing him grow into understanding the entire liberal arts enterprise stands out as one of my most cherished memories on the faculty here at the College.” 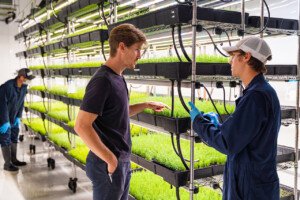 Sam Norton speaks with an employee of Heron Farms about the progress of a crop of sea beans.

Long adds that Norton’s ability to think laterally across the liberal arts was beneficial to his success. But so was the work Norton put into cultivating and distributing his product – not to mention the much-needed capital and validation he received by winning competitions like the Harbor Accelerator program, the ACRE Advanced Entrepreneurship Program and the Google for Startups Accelerator.

“I’m lucky,” says Norton, who participated in the competitions with the help of CofC’s Office of Research and Grants Administration. “In the beginning, we raised capital from mentors that I’d met through startup competitions. They were both the investors and mentors, which is helpful.”

Indeed, Norton spent most of his time at the College setting himself up for success.

“By the time he took his political science capstone, where he began researching pieces of what now has grown to become Heron Farms, he was firing on all cylinders. In that sense, Sam’s successes are hardly surprising – it was really just a question of where and how he would excel,” says Long. “It’s clear to me that his vertical seawater farm will be only the first in a series of ways in which Sam will make his mark – all rooted, I am sure, in his love of learning in the liberal arts tradition.”

For those entrepreneurial-minded students at CofC hoping to make their own mark, Norton warns against getting hung up on writing a compelling business plan.

“What you really need is just to start doing it,” he says. “The compelling parts of it will reveal themselves after you’ve talked to your customers and listened to feedback.”

It certainly worked for Heron Farms – and now the future is full of opportunities.

“We recently completed construction of Heron Farms’ new indoor farm up on the Neck in Charleston,” he says. “We’re excited to be pioneers in what may be a growing industry.”