Math and March Madness might not seem to go together, but they do – at least when it came to how four College of Charleston math students picked the Top 10 shots of all time in the NCAA Division I Men’s Basketball Championship.

Sports prediction website Pickwise asked sports analyst Tim Chartier of Davidson College and former college basketball star turned CofC mathematics Professor Amy Langville to come up with the list based on the Top 12 shots from 1982 to 2021 that nine experts chose. The pair worked with CofC students Kristen Looney, Orel Robino, Jenna Snead and Zack White, who ranked the shots based on pressure and probability, along with the rankings from the experts, which they aggregated using the Borda count method (consensus based rather than majoritarian). The students weighted the shots in order of pressure, shot probability and expert rankings with a ratio of 3 : 1.5 : 2, respectively.

“We ended up doing a shot probability based on the location of the shot, and a pressure ranking that was an aggregate of three factors: the timing, the result of the shot – did they tie or win? – and the pressure on the player at the time of the shot,” says graduate student Looney. “What was interesting to me was how different the expert rankings were. Just among the four of us, I think all of us would pick a different number one, honestly.”

Although the calculations placed Kris Jenkins’ three-pointer buzzer beater to win Villanova the championship over North Carolina in 2016 as the No. 1 shot, graduate student White would have picked the improbable basket by Northern Iowa’s Paul Jesperson from 54 feet in 2016 to beat Texas in the first round.

“He made it with like two seconds left,” says White. “He just heaves it up from beyond half court and wins the game.” 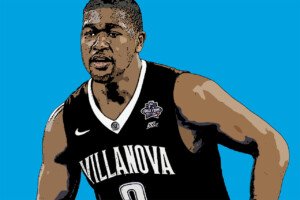 Despite a somewhat high shot probability ranking of six, the pressure placed on Kris Jenkins during his 2016 championship-winning three-pointer, and being the experts favorite, put Jenkins in the top spot as the best March Madness shot.

A game winning shot from Jalen Suggs, which took Gonzaga to the championship game last year (2021), just missed reaching the top of the list. His near-half-court shot had a probability ranking of two, placing the buzzer-beater in second place.

Eight of the 10 shots that made the list are all from the last 10 years, but there are two famous outliers. The first is Christian Laettner’s legendary shot in the 1992 finals, which had a shot probability ranking of 11. The pressure of the shot and the experts’ opinion put it in third place. The other is Michael Jordan’s game winning jump shot from 1982, which sits at fourth with a pressure ranking of the same. His game-winning jumper over Georgetown in the title game with 14 seconds left also threw then 19-year-old Jordan into the limelight for the first time.

“It was fun to get to do a math project on something that I already like,” says sports fan Looney.

White enjoyed applying concepts he learned in class to the real world.

“I didn’t anticipate the project would be as math heavy as it was,” he says. “But it was nice to see these two different arenas come together.”

The big difference: math is predictable, sports are not.

“The big takeaway for me,” says Snead, who plays on the College’s women’s soccer team, “is that you can do all this math and still be completely wrong. March Madness is such a wild, unpredictable event. At the end of the day, sports are so random, but that’s kind of the cool part.”

Up next, the math team is devising a data asset formula to help Chartier make bracket selections and predict which team could win it all based on their play coming into the tournament. No more broken brackets!

Now that’s a game winner if there ever was one.