By Erin Perkins|2022-04-19T08:36:55-04:00April 4, 2022|All News, Alumni|Comments Off on Alumna’s Tiny Tassel Is Getting Big Attention
When you walk into the Tiny Tassel shop on St. Philip Street in downtown Charleston, you are instantly transported to a magical land of rainbows, joy and, yes, a few unicorns. This merry land of wonderment is from the brilliant mind of entrepreneur Mimi Striplin ’14. 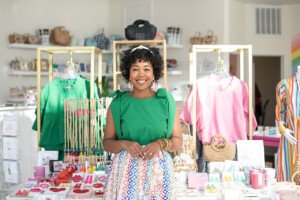 Mimi Striplin in her store the Tiny Tassel

Striplin’s grand idea first came from a thoughtful gesture from her family. Her older sister Aiko bought her a pair of bright pink tassel earrings for her birthday several years ago, after she had been pining for them, and mentioned that Striplin could have made a pair for herself. This sparked the thought that she could craft these in her spare time, away from her retail job, for extra money. “Even if it was just $20,” says Striplin, “I wanted to give it a try, because it would bring more value to my life.” She started selling multicolored tassel earrings online with craft retailer Etsy in 2015. In the beginning, only friends and family were ordering from Striplin’s shop, but her first big realization that she was onto something special was when a stranger purchased a pair. “It was my ‘aha!’ moment,” recounts Striplin. She started hosting pop-up shops around Charleston, and the word spread. Striplin studied corporate communication at the College of Charleston, so promoting her business was a natural extension of her studies. She credits social media in the rise of her sales. Now she’s being featured on The Today Show as well as in Essence, Southern Living and other publications. Though Striplin claims to be the “least artistic” person in her family, her crafting skills are apparent if you look at her work. Even more apparent is her vision for her business. She always knew she wanted a physical shop. Six and a half years after starting with her brand on Etsy, she achieved that (and now even hints at expansion). Her shop in Charleston opened in March 2021. Opening amid the COVID-19 pandemic, she wanted to create a happy space. “For many people, it was the first time they had been in a shop other than a grocery store in quite a while,” says Striplin. “It brought them so much joy. Giving people a place to see the merchandise and touch the items, to give them some sort of normalcy was really gratifying.” The store sells the original tassel earrings, but also stocks clothing created by Striplin’s mother Keiko Striplin, along with goods from other Black female business owners. When asked what advice she would give to other budding entrepreneurs, Striplin says, “Start! Just start. I don’t know why I waited so long.” She didn’t have a business plan when she started, though, and laughs as she suggests maybe others might want to do that. “If you have something that you want to do, work really hard at it, and be consistent,” says Striplin. “If I can do this, anyone can do this.”