The College of Charleston held its 6th annual German American Business Summit (GABS) on March 29, 2022, with approximately 175 attendees including business representatives, students and members of the campus community. The Spring Career and Internship Fair, which took place immediately after the summit, featured 115 companies and more than 400 job seekers.

“It was fantastic to have everyone back together in the same space,” says Morgan Koerner, chair of the Department of German and Russian Studies and GABS founder. “It underscored how important it is for students and company representatives to interact and discuss what we can do together to improve our workforce.” 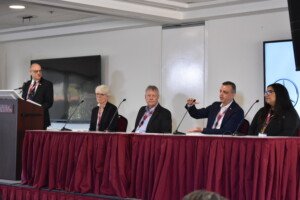 “The 6th German American Business Summit at the College of Charleston was again a perfect place for businesses to meet academia,” Brase says. “As a member of the panel, I truly enjoyed the questions and the interest of the student body, not only during the presentation, but also during a very well-attended job and internship fair.”

“The CofC team did an excellent job connecting students with local business leaders,” adds Daniel Schlegel, vice president of Customer Service, KION North America, who also served on the panel. “The exchange is essential as Charleston is growing as a diversified business hub with plenty of opportunity for future professionals and business leaders. I enjoyed meeting and listening to the CofC students and sharing my thoughts with them. I look forward to the seventh GABS next year!”

Koerner notes that Knudt Flor, a former BMW executive who is now the College’s senior vice president for innovation and industry engagement and distinguished professor of practice, will continue to spur GABS’ momentum.

“Knudt represents everything that the summit highlights,” says Koerner. “With Knudt now joining our team here at CofC, GABS7 will be even more phenomenal!”

The benefits of the combination of the summit and career fair this year were tangible.

Allie Parnell, a German studies and finance double major with a minor in real estate, found the summit and career fair not only interesting but career affirming. 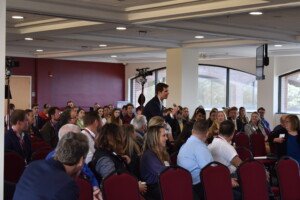 “The morning panel at the summit had a lot of great tips for getting hired at a German company and about how to stand out from other applicants,” says Parnell. “When I got to the actual job fair all the companies were very welcoming and super informative. They shared with me that having a German studies background was going to be very helpful in my future career plans. I am only a freshman, so I went to get my face out there and start making connections early. I’m very excited to return next year and the following years after that. I could easily see myself getting a great opportunity from one of the various German companies.”

Seniors Cooper Jay and Hannah Ploskonka got more than they expected out of the career fair when Walter Kaufmann, CEO of P3, a German consulting company specializing in areas including automotive, banking and insurance, IT and energy, offered them both jobs on the spot.

“With companies needing talent now, we anticipate more ‘on the spot’ interviews and real-time offers in the future,” says Jim Allison, executive director of the College’s Career Center. Because of the dynamic of the career fair and the demand for quality talent, more than 30 companies have already signed up for CofC’s fall career fair. 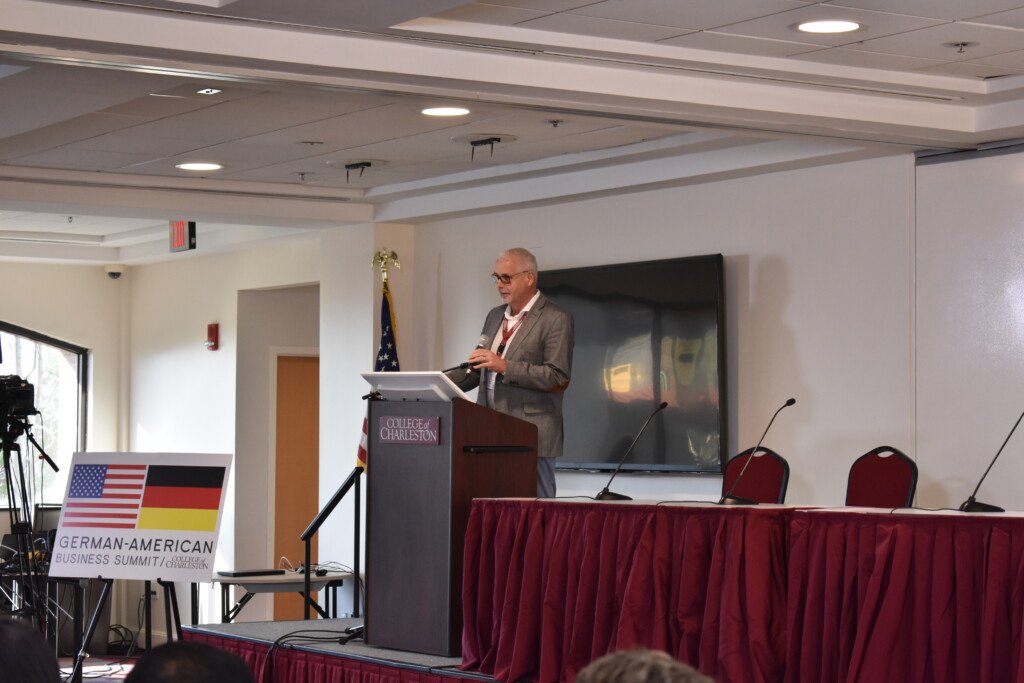 “As a senior at the College, I have been able to attend the German American Business Summit two times before this year,” says Jay, an international business and German double major with a minor in political science. “I have always enjoyed going to this event and networking with German companies in the area. I think that Dr. Koerner and his team do a wonderful job. It is really the perfect opportunity for CofC students to network and find great opportunities for internships and full-time jobs.”

At the summit, Jay asked about whether it is better to move to Germany to find work or work for a German company in the U.S. after graduation. Armed with some great responses, he went to the career fair and stopped by the P3 table. The P3 team remembered Jay’s question and asked about his interests and goals, which include moving to Germany to improve his German speaking skills. He then met with Kaufmann, the P3 CEO, who offered Jay a job on the spot as an associate consultant. The offer included the opportunity to go to Germany for June and July to take language classes in the morning and work at the P3 headquarters in Stuttgart in the afternoons before returning to the U.S. in August to begin working in e-mobility, such as the technology of electric and autonomous vehicles.

“This is something that has been a passion of mine since I did a year–long senior thesis project on electric and autonomous vehicles in high school,” says Jay. “During my time at CofC, I had two internships with German automotive companies. If it wasn’t for these experiences, I don’t think I would have the job offer at P3, which I officially accepted.”

Ploskonka, an international business major and European studies and dance minor, also sought out P3 at the career fair. 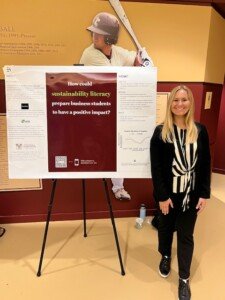 “With the tagline ‘business as unusual,’ I wanted to learn more,” says the Honors College student, who is currently completing an internship at a 3PL logistics company. After sharing her resume, the P3 team asked her to return in 15 minutes for an interview.

“I spoke about my leadership experience with CofC, specific class projects including ImpactX and peer mentoring for a global simulation class where my team finished with among the highest profitability based on real-time decisions,” says Ploskonka, who had a flash mentoring session with Honors Faculty Fellow Lancie Affonso ’96 right before the interview at TD Arena.

With her multiple internships and creative, entrepreneurial interests, Ploskonka was a strong candidate who immediately stood out. Kaufmann was so impressed, he also made her an offer, but before she accepted, Ploskonka spoke with four current consultants at the company to make sure it was the right fit.

“I realized this was my dream job that I didn’t even realize was a possibility,” says Ploskonka, who later called Kaufmann and accepted the position as a consultant based in Greenville, South Carolina. She’ll be assigned clients based on her strengths and interests.“I can build a portfolio for myself and be pushed to create growth opportunities within the company.”

It just goes to show that opportunities await.