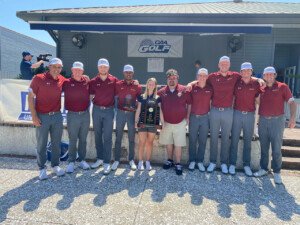 Kieron van Wyk, fourth from left, along with this teammates clinch 2022 CAA titles during a tournament at Dataw Island.

Head coach Mitch Krywulycz’s squad clinches its ninth NCAA Regional appearance in program history and sixth since joining the CAA with the win. The Cougars will compete in the NCAA Tournament in back-to-back years for the first time since 2016 and 2017. The women’s golf team on April 17 also took home the 2022 CAA Championship during the women’s tournament and earned an NCAA berth as well.

An international student from Ruimsig, South Africa, van Wyk is in his first year of play with the Cougars. He is the first person of color to compete on the College’s men’s golf team. Trailing teammate Nevill Ruiter by three strokes heading into the final round, van Wyk stormed back to win the tournament with a 5-under 67 on Tuesday. He finished the week at 13-under par (69-67-67 – 203) to clinch medalist honors. Van Wyk’s win gives CofC back-to-back individual winners after Zach Reuland claimed the title last year. CofC now has six individual CAA champions with all six coming since 2015.

For the full report, visit cofcsports.com.