College of Charleston President Andrew T. Hsu grew up in China, and at 16, taught himself to read English using the limited resources he had available, which included a calculus textbook, a few novels and a dictionary. He spent hours writing down unfamiliar words and searching the dictionary for their meanings. 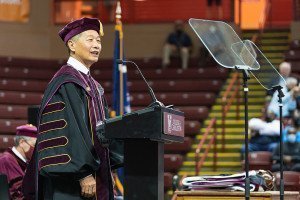 “Human beings have a natural inclination to want to learn,” says Hsu, who eventually came to the United States to attend the Georgia Institute of Technology, earning a master’s degree and a Ph.D. in aerospace engineering. After graduating, he worked in private industry for a number of years, including a stint as a researcher for NASA, before entering academia.

“I found that being a professor is a lot more enjoyable because I could inspire students to learn and actually use my experience of teaching myself to help students – and that was a very fulfilling career,” says Hsu, who reflected on his professional path and his vision for the College in a recent interview on the podcast Speaking of … College of Charleston.

And his love of learning continues in his role as president of the College. This spring marks his third anniversary at CofC, two of which took place during the unprecedented global pandemic.

“The resilience of our campus is just unbelievable,” says Hsu. “I think we did a good job of keeping our campus open and our students in the classrooms, but more importantly, we developed a strategic plan and we didn’t take our foot off the gas. We made very rapid progress despite the pandemic, and I think we are emerging a much stronger institution.” 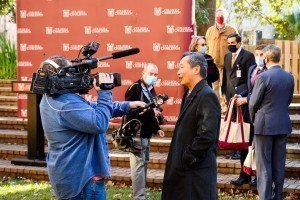 President Hsu talks with reporters at a press conference announcing the new School of Health Sciences.

The College’s 10-year strategic plan, Tradition & Transformation, is a hallmark for the president. According to Hsu, it will provide the College with a roadmap to become one of the world’s premier liberal arts institutions.

“Liberal arts education has evolved over time, and it’s been evolving and expanding as time goes on,” says Hsu. “What’s needed for a well-rounded citizen to function and contribute to a society is rapidly changing. The College of Charleston can be a national or even international leader with innovations to liberal arts education. I think the future of liberal arts education lies in including more technology skills that are needed to navigate in the 21st century.”