Before his debut novel found a publisher, before he joined the College of Charleston’s English department and long before his work appeared in Oprah’s Book Club, Bret Lott found himself in a predicament familiar to all writers: being surrounded by rejection slips.

The writer’s life is “filled with rejection,” says the beloved professor of English, who has published 14 books. “You have to build your house on rejection.” 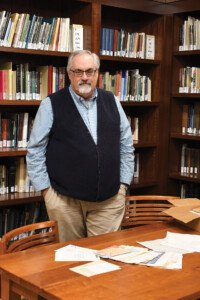 The award-winning author kept every “thanks, but no thanks” slip, filling a shoebox to the brim. Along with his personal papers spanning a nearly 40-year career, these slips have found a permanent home in the College Libraries’ Special Collections.

Lott’s manuscripts, early drafts and other materials “filled the back of my F-150. The cab, too, plus a few boxes in the passenger seat.”

Looking at Lott’s prolific output over his 36 years at CofC, one would be forgiven for thinking a caravan of trucks would have been required. That it didn’t is a testament to Lott’s wife, Melanie, who neatly organized every piece of paper in plastic file boxes.

“My wife is my hero,” Lott says, who is celebrating his 42nd wedding anniversary this year. For Special Collections’ archivists — who typically receive donations of personal papers in various states of chaos — Melanie might be theirs as well.

While rejection may be the foundation for every author, Lott has built atop this a career marked by publishing success and, for the thousands of students in his classroom over the years, an indelible impact on how they approach writing.

Born in Los Angeles, Lott studied at Cal State Long Beach and UMass Amherst. He joined CofC’s English Department in 1986, after a stint at The Ohio State University. It was during this time in Columbus that he worked on his first novel. With a newborn baby and a full-time job, Lott headed to the basement and wrote each morning from 4:30 to 6:30 a.m.

“I wrote everything longhand in miniscule handwriting on trash paper,” says Lott, referring to the scratch paper his wife brought home. “Everything I wrote was on the back of paper that was going to be thrown out anyway. It was low stakes. They were already going to be trashed, so if the book doesn’t work out, there’s been no loss.”

After a year of work, the novel — the first of eight; he also published three story collections and three works of nonfiction — was complete. “I remember very vividly coming upstairs telling my wife I finished it. Not triumphantly, I was quiet. Every writer remembers those moments.”

For people with Lott’s career, their personal papers often end up at their alma mater. But for him, the choice
was easy.  “I received a great education in California and studying with James Baldwin in Massachusetts, but I was a 27-year-old kid when I first arrived in Charleston. For 36 years, I’ve been walking these bricks, teaching in Maybank. This is home.”

Lott recalls when he arrived at CofC  in 1986. “There was one restaurant that stayed open past 9 p.m., but there was already a community of writers.” He remembers fondly the monthly meetings in Simmons Auditorium of every CofC faculty member. “I’d meet people from philosophy and math and physical education; we really got to know the whole faculty.”

Charleston and CofC have changed a lot but some things remained constant: Lott’s view of the power of literature. “Writers Change the World” is one of his favorite First Year Experience courses to teach.

His advice to student writers is also the same: “Take who you are, where you’ve been and ask yourself, what if? Every sentence you write hasn’t been written before. And don’t give up.”