CofC Community Comes Together for Inaugural Maroon Walk for Juneteenth

College of Charleston faculty and staff recently gathered for the inaugural Maroon Walk for Juneteenth in recognition of the annual celebration historically held in African American communities on June 19 to mark the date in 1865 when word reached Texas, more than two years after the Emancipation Proclamation, that those enslaved were free.

Developed by the Whipper Grant Caucus, an affinity group designed to support CofC’s Staff Advisory Council (SAC) to the President in communicating the experiences and perspectives of Black/African American staff members, the Maroon Walk for Juneteenth, held on June 9, 2022, honored the African American settlements established by fugitive slaves known as maroons. More than 30 faculty and staff members gathered for a half-mile walk to sites where African Americans made indelible contributions to the CofC campus while decorating flowerbeds, walkways and buildings with Pan-African flags along the way. 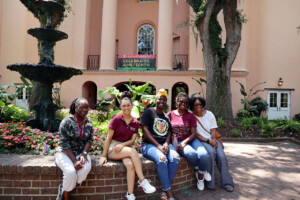 Graduate School Dean Kameelah Martin and SAC President Charissa Owens with other CofC employees during the Maroon Walk for Juneteenth.

“Inspired by Ms. Opal Lee’s Walk for Juneteenth, we aspired to establish an empowering, yet active opportunity to recognize Juneteenth at the College of Charleston,” says Charissa Owens, SAC chair, Whipper Grant Caucus member and director of diversity education and training in the Office of Institutional Diversity. “We wanted it to be a space of jubilation for all campus members, especially African American/Black employees. We also wanted to make others, including visitors and students, aware that campus members were honoring Juneteenth.”

The Office of Institutional Diversity and the Graduate School, along with many other campus divisions, offices and programs, contributed funding for the Pan-African flags, banners and yard signs. The caucus used the College’s Discovering Our Past virtual tour to identify a few sites to feature on the route to educate participants about the history of campus buildings and land. Featured sites included the Solar Pavilion near the Pi Kappa Phi Bell Tower where an 1853 slave tag was found, the African American Cemetery Memorial that honors the former site of an African American cemetery at Rivers Green and the Knox-Lesesne House, which was built in 1872 for A.O. Jones, an African American and clerk of the South Carolina House of Representatives during Reconstruction. 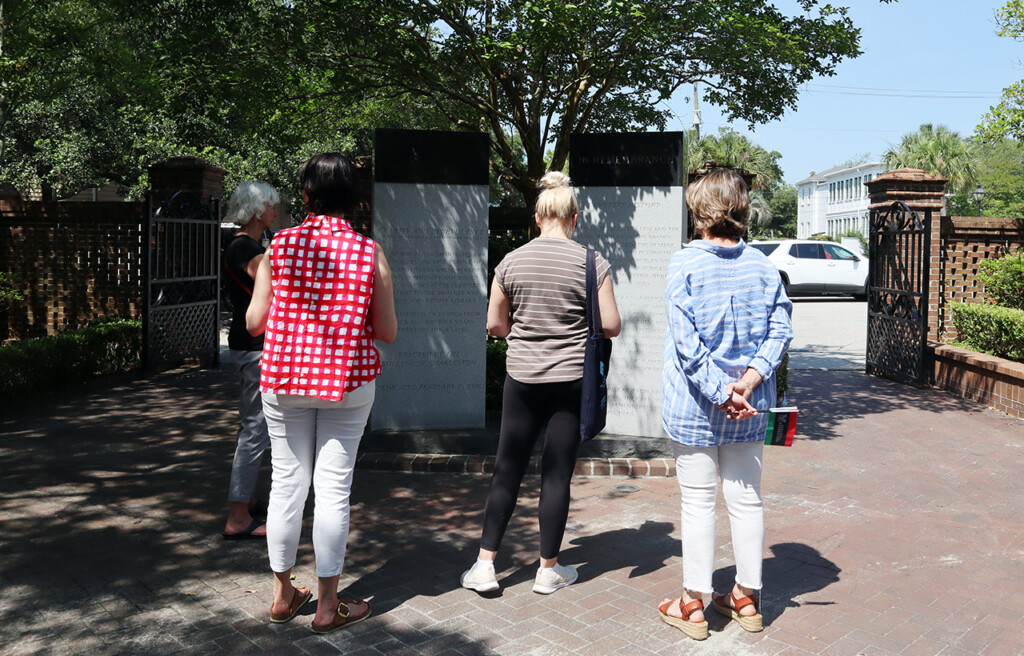 “We wanted to celebrate the moment and really make an event out of it,” says Kameelah Martin, dean of the Graduate School and a member of the Whipper Grant Caucus, which is named for Lucille Whipper and Owilender K. Grant, the College’s first Black administrator and first Black tenure-track faculty member, respectively. “We also wanted to acknowledge all of the sacred spaces on campus where people of African descent have contributed to the campus culture – in the past, present and into the future.” 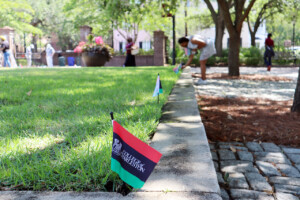 Martin says the goal in putting up the flags and signs was to both celebrate Juneteenth and also raise awareness about the holiday, which Congress voted to make a federal holiday in 2021.

“The signage will be up a week before and a week after June 19, the official holiday,” she says. “For community members who do not know the significance, perhaps they will take a moment to learn more about it because they see the beautifully designed banners.”

Chatting about the history of each site and decorating flowerbeds, paths and buildings with the red, black and green Pan-African flags along the walk, members of the campus community reflected on the significance of Juneteenth and the importance of elevating African American history at CofC. 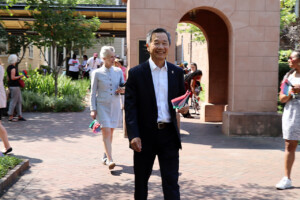 “It was really a joyful moment,” says Martin, who hopes to see the Maroon Walk for Juneteenth become an annual event at the College. “It was great to see our colleagues join in a meaningful celebration.”

Owens says she is “elated by the outcome” of the inaugural Maroon Walk for Juneteenth, noting that CofC President Andrew T. Hsu attended the event, which “spoke volumes to his commitment to DEI (diversity, equity and inclusion).” She also took note of the excitement from Facilities Management employees, who were “so proud and jubilant” that they pinned the Pan-African flag in their hats.

“It was truly a moment of unity and celebration – something I believe our campus members needed to see and be a part of,” she says.