No Bones About It: Paleontology Field School is Way Cool

When it comes to experiential learning, there probably aren’t too many experiences better than the College of Charleston Paleontology Field School in Glenrock, Wyoming. Twelve geology students went on the three-week trip in May, making several discoveries, including triceratops bones, fossilized leaves and the longest tyrannosaur trackway (about eight footprints) ever discovered, all of which were laying undisturbed for about 65 million years before the students uncovered them.

“You cannot replicate the Glenrock exposure in the classroom,” says expedition leader Scott Persons, an assistant professor of geology at the College and curator of the Mace Brown Museum of Natural History. “My students learned how to reconstruct the prehistoric environment. They learned about grain size. They looked at small-scale and large-scale depositional environments, and they learned how fragile fossil bones can be.” 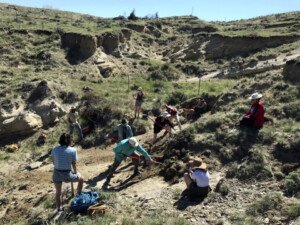 Students digging for fossils in the Glenrock, Wyoming.

One of the 12 students to go on the trip was Rebecca Starkey, who spent an extra week in Wyoming thanks to a Summer Undergraduate Research with Faculty (SURF) grant. It was the first time in the field for Starkey, a rising junior double-majoring in geology and biology. (She also made the terrific video below.)

“I loved it,” she says. “It was a unique experience. It’s so cool that the school offers something like this, because it would be so easy to just graduate with a degree in geology and not know what you’re actually doing when you get into the rocks. It gave me a lot of firsthand knowledge.”

Bones are literally everywhere in the dig area, which comprises about one square mile 15 minutes from town. The rocky strata in the badlands are now inhospitable high desert, but back when the dinosaurs were there, it looked very much like Charleston does today with a rich collection of flora. Leaves don’t survive as well as bones, however, so it was quite a eureka moment when Starkey and Juliet Riddle came across some fossilized leaves under a juniper bush as they climbed up a steep hillside on their way back to the expedition SUVs.

“I’m very interested in paleobotany, so it was super exciting,” says Starkey, the second recipient of the new Paleontology Scholarship, which is funded in part through visitor donations to the museum. “I love the animals as well, but plants have been around ever longer.”

Students at other universities typically have to be in a master’s program to do this kind of field research, and its Persons’ relationship with the Paleon Museum in Glenrock, where he is a curator, that fosters it.

“This partnership that we’ve got going on right now is extraordinary,” he says. “This is not, ‘Let’s go on a sightseeing tour.’ This is, ‘Let’s go out to a specific locality with specific research goals in mind. Let’s collect material, bring it back and then work on it in the subsequent semesters and publish real research on it.’”

That includes specimens others have discovered but were just waiting at the museum for someone to study, like parts of an armored, herbivorous dinosaur known as a nodosaur. Among other questions, Persons wants to figure out how this rhino-sized animal died, and a hole in a hip bone just might have the answer. 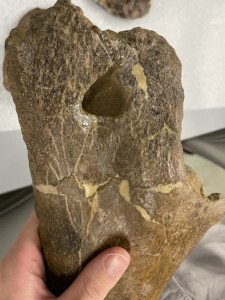 A nodosaur hip bone found in Wyoming students are examining.

“We started by looking at other published nodosaur hips, and none of them have this hole,” he says, pointing at it. “It’s a big puncture hole that matches up very nicely with the form of a Tyrannosaurus tooth.”

He inserts a cast of a T. rex tooth into the hole. A braided line on the upper right corner also matches up with the serrated edge of the tooth. Smaller holes on the other side indicate a smaller T. rex might also have joined in on the feast.

“There’s a very real possibility that mama rex and baby rex were eating alongside each other,” he marvels. “That’s super-duper cool.”

Two students, Roxy Buck and Riddle, both geology majors, have already submitted an abstract on the finds to make a presentation at the annual meeting of the Geologic Society of America in October. The goal is to publish a formal, scientific paper in a peer reviewed publication with the specimens going on display in the Mace Brown Museum during the interim.

In addition to the leaves she found, Starkey is also studying a pterosaur wing from the Paleon Museum.

“I’m fascinated by dinosaurs because they’re like nothing we’ve ever seen before,” she says. “Plus, it’s hard to imagine the world without us in it.”