Betty Beatty, longtime supporter of the College, loves connecting with the “Beatty Bunch” scholars and is relieved she’s not part of the selection committee.

“I would want to give a scholarship to all the students,” she says with a smile. “It’s too hard to choose!” 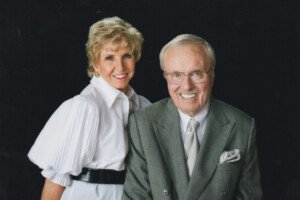 Beatty and her late husband, Guy, always believed that access to education was essential, and for the last 25 years, the Guy E. and Betty Beatty Scholarship Fund has provided nearly 140 students with access to an education at the College. Each year, 10 high-achieving incoming freshmen with plans to major in business receive a four-year scholarship and become Beatty Scholars.

“We wanted to give others the opportunity to do what we couldn’t,” says Beatty of the initial spark to create the scholarship in 1997. “My husband and I couldn’t afford to go to college. Guy was a farm boy with no education from the hills of Virginia, and he worked all the time.”

Guy was determined to be successful and started working as soon as he graduated from high school. He quickly rose through the ranks at 3M and at 29 years old left the company to start his own real estate business, eventually focusing on commercial real estate development. Generous by nature, the Beattys began their philanthropic work as soon as they were able. 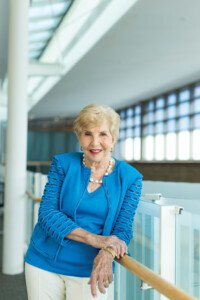 “Guy was likable and could talk to anyone,” says Beatty. “He connected with people everywhere he went.”

The Beattys’ connection to the College began when daughter Susan enrolled in the School of Business in 1986. “It wasn’t long before we saw a need for more scholarships,” says Beatty.

Jody Bell, a rising Honors College senior majoring in finance, is one of the more recent students who have benefited from the Guy E. and Betty Beatty Scholarship.

Alexey Bogomolov ’03 was one of the early members of the Beatty Bunch and says the scholarship was instrumental in obtaining his undergraduate degree.

“It served as a foundation for all my future career endeavors,” says Bogomolov, who works in data analytics. “It provided necessary financial support, built confidence and established significant relationships on and off campus.” 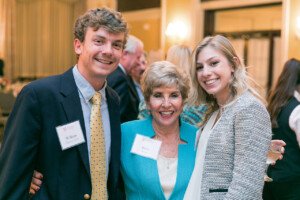 etty Beatty with Beatty Scholars William McEwen ’20 and Renee Fraley ’20 at the 20th anniversary celebration in 2016.

“The Beatty Scholarship offered me the unique opportunity to remain flexible during my academic career resulting in calculated risks, big dreams and ultimately the ability to pursue a career in energy and external affairs that I love,” says Kristen Beckham ’07, director of external affairs at BHE GT&S, a Berkshire Hathaway Energy company. “Without the Beatty Scholarship, it is unlikely that I would have been so well prepared for the life and career I found after my time in Charleston. What the Beattys have done to support students at the College of Charleston, and specifically at the School of Business, is extraordinary.”

Students like these remind Beatty of the enduring value of the scholarship. “It’s very satisfying,” she says, “to help young people do what they want to do with their lives.”