Ten years ago, head volleyball coach Jason Kepner came up with a great idea. The NCAA had just approved what it termed “an emerging sport,” and Kepner figured that if the College added the new sport, it would benefit his current volleyball players. The then-director of athletics, Joe Hull, agreed.

That is how the College of Charleston created the school’s beach volleyball program.

A lot has changed over the years. In 2012, the new sport fielded only 11 college teams. That year, the Cougars’ beach volleyball team advanced to the final four of the national tournament. Today, beach volleyball is the fastest-growing championship sport in NCAA history, with more than 60 colleges currently fielding (or is it, sanding?) teams. 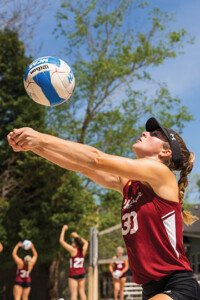 “It can be started relatively quickly playing in its natural environment on the beach,” he says. “Then the program can be expanded over time with a beach volleyball facility.”

As the sport grows, so does the success of the College of Charleston program. This spring, the team finished the season with a program-high 22 wins. The team also made its first postseason run as members of the Atlantic Sun Conference. Two players, Gabi Bailey and Kyra Thompson, set a new single-season record for wins by a pair with 23. The two concluded the season with a 23–4 mark, which translates into an impressive .852 winning percentage.

Kepner forecasts a sunny future for the College’s beach volleyball program. “I think that the draw of Charleston and its beach really helped us recruit good student-athletes,” he says. “There is a great opportunity to grow the sport here at the College and gain more national recognition.”