For nearly 25 years, Scott Harris has sifted through more than a century’s worth of dirt and sand collected within the H.L Hunley in the hopes of helping answer the biggest question about the iconic Civil War-era submarine: How did it end up at the bottom of the Atlantic Ocean just off the coast of Charleston?

Harris, in conjunction with other researchers, is working on a new excavation report that will offer some fresh clues.

“What we’re trying to do right now is analyze the internal sediments and all of the other materials inside the submarine,” says the associate professor of geology and former director of the College’s Archaeology Program. “We are studying the accumulation and material relationships between the sediments and the human remains and artifacts.” 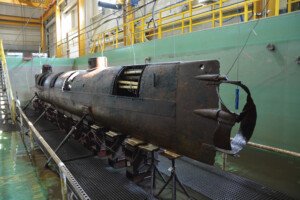 To the casual observer, all of the sand and mud that settled in and around the 40-foot submarine after it disappeared in 1864 may seem inconsequential. But to Harris, who specializes in coastal systems and geoarchaeology, the way the sediments settled and the sea life that moved through it offer insight into how the vessel came to rest on the ocean floor.

“Understanding the oxygen content and the sedimentation at the time the Hunley sank – and in the years after – really gives us an understanding of what the environmental conditions were inside the submarine,” says Harris, who first got involved with the recovery and excavation of the Hunley in the late 1990s while he was still a doctoral student at the University of Delaware.

On Feb. 17, 1864, the Hunley, a private vessel conscripted by the Confederacy, became the first successful combat submarine in history when it sank the USS Housatonic, which was part of a Union blockade off the coast of Charleston. The Hunley accomplished its task by ramming the hull with an explosive device attached to a 16-foot spar on the bow. But the Hunley never resurfaced, and the vessel and its eight-man crew remained lost at sea until 1995, when the National Underwater and Marine Agency located it in 30 feet of water about four miles from the shores of Sullivan’s Island. 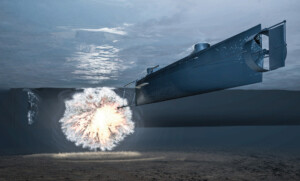 An illustration of the “Hunley” ramming the “USS Housatonic.” (Photo compliments of Friends of the Hunley/Dan Dowdey)

Harris was there in 2000 when the Hunley emerged from the ocean for the first time in 136 years – becoming one of the largest intact metal artifacts ever recovered from the seafloor. Standing on a bobbing shrimp boat, he watched with great anxiety as the sub was placed on the deck of a barge before making its way to the Warren Lasch Conservation Center in North Charleston, where it continues to be studied more than 20 years later.

“The H.L. Hunley submarine was such a significant discovery in maritime history, as she was the first successful combat submarine,” says Kellen Butler, president and executive director of Friends of the Hunley. “Since then, a team of scientists has worked in multiple fields like archaeology, conservation, metallurgy and geology to study the vessel. We were very fortunate to have had Dr. Harris on our team back in the early days, and that continues today.”

Throughout his involvement with the Hunley, Harris has studied the geological environment in the submarine to help give context to the vessel as an archaeological site.

“Did they settle on the bottom and wait to come up? Or did they immediately flood and go to the bottom? We may never know the answer to that question,” says Harris, “but we do know that sediments came in fairly early. And we know from the presence of microorganisms and from dating of the sediments that the submarine was completely buried within about 25 or 30 years of its sinking.”

What’s more, says Harris, the way the dirt filled the sub indicates that sediments first came in at the forward conning tower and flowed to the stern, where there was less oxygenation. Those conditions help explain why some artifacts and remains of the crew were more intact than others.

That’s where connecting the dots in this latest report could offer researchers new breadcrumbs to follow in the ongoing quest for answers about the Hunley’s fate.

For Harris, this research has become as much about unraveling the mystery of what happened to the submarine and its crew as it has been about the science.

“It’s interesting,” says Harris, explaining why he’s stuck with the project for so long. “And it’s important for the submarine as an artifact and the human beings who were in there.”