Life has a funny way of creating lasting moments in time – snapshots that connect the past to the present and lead into the future. For Elizabeth Devolder ’97, Sonya Fields ’97 and Becki Berry (née Leitner), that moment began in August of 1993, when they were randomly assigned as roommates in what is now Berry Hall.

“We clicked right away,” says Fields.

Even when Berry left before graduation to get married and start a family. Even after Fields and Devolder graduated with bachelor’s degrees in psychology and corporate communications respectively. Even as life pulled them to different corners of the country and around the world, with Berry remaining in South Carolina, Devolder eventually settling in Florida and Fields living in Europe, Asia and the Middle East. Even as their families grew and changed and their careers evolved, their friendship has endured. 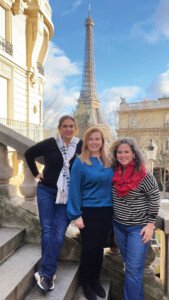 And when Devolder found herself getting divorced in 2020, the three friends were there for each other – often communicating via WhatsApp on their group chat, dubbed “CofC Girls.” Then, as the pandemic began to wane in late 2021, Berry had what Devolder jokingly calls a “cockamamie idea” of planning a whirlwind trip to Paris in three weeks’ time. It was meant to be a reunion of sorts to celebrate the 20th anniversary of the friends’ first trip to Paris in 2002.

So, the friends gathered their passports (Devolder’s passport was renewed just hours before the trip) and their COVID-19 vaccine cards, purchased last-minute plane tickets and made the trek to France. It was Devolder’s responsibility to bring ball gowns for her and her friends to wear for a fancier version of a photo they’d taken at the Palais-Royal Garden in 2002.

Unlike their first trip to the City of Light – where they had an ambitious itinerary that included climbing the Eiffel Tower twice, visiting the Louvre and walking along the Champs-Élysées – the second time around was more laissez faire.

“We just hung out and had a ball,” says Berry. “That was our goal.”

Really, they just wanted to spend time together.

“I think there’s something really special about the relationship you have with people over time, when somebody’s known you for that long that they knew you before your career, before you knew what your career was going to be, before you got married,” says Devolder.

Although they don’t know when they’ll all be in the same city again, Fields is suggesting a trip to French Polynesia.

Another snapshot for these lifelong college roommates.