Valerie Frazier: A Legacy of Her Own

It all started on a steamboat in New Orleans. At least that’s where Valerie Frazier ’91 (M.P.A. ’94) wrote the official proposal for what is sure to be part of her lasting legacy at the College of Charleston.

In 2019, with the help of the Black Alumni Council and others, Frazier started developing the 1967 Legacy Program – a four-year initiative funded solely by philanthropic donations and aimed at improving the recruitment, retention, graduation and workplace success of African American students through scholarships, enhanced and extended education support and professional preparation, as well as research experiences around African Americans’ contribution to the College. This year, the program launched with an inaugural cohort of 11 Legacy Scholars. And Frazier couldn’t be more proud.

“The Legacy Scholars are blowing my mind with their level of commitment. They have made it their own,” says the associate professor of English and director of the program. “It touches my heart to see them find something they believe in.” 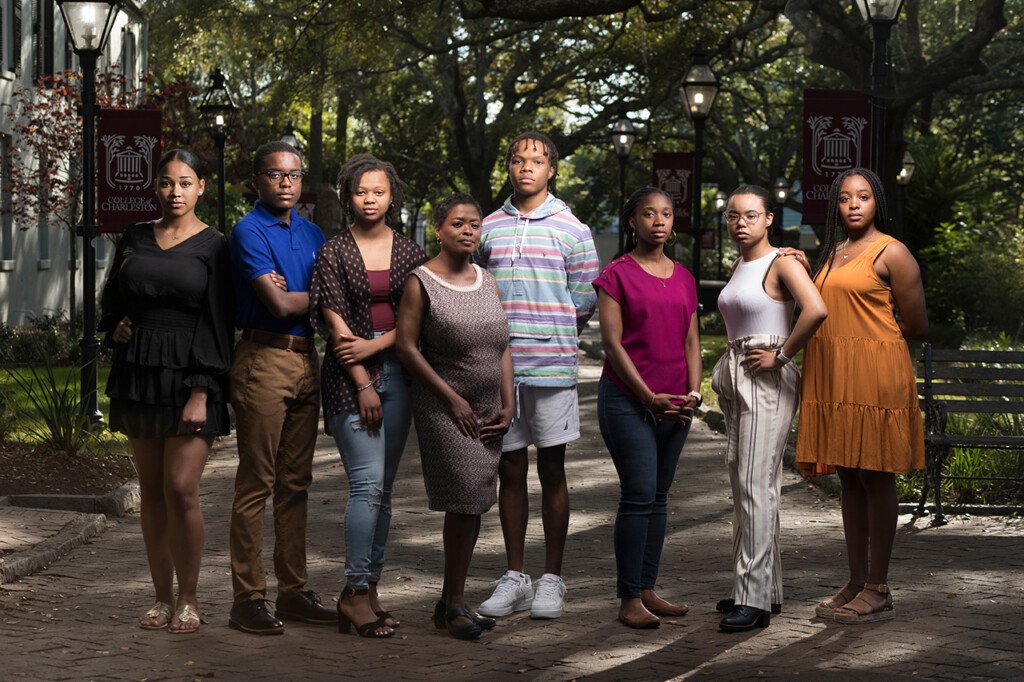 Named for the year that the College was integrated, the 1967 Legacy Program requires its scholars to take the freshman seminar, 1967 Legacy and Beyond, which explores the history of the College in and around 1967 and involves historical research projects promoting awareness about the African American story at the College.

“The Legacy Scholars love being a part of history and finding out the stories of the people who came before them,” says Frazier, who dreams of one day growing the program from 11 students to 40. “I see them as bridges, bridging us to generations that are gone and those that are coming. And they are able to make their own history, too, falling into the footsteps of the trailblazers before them.”

“I’d always wanted to be an English professor,” says Frazier – who, after graduating with her B.A. in English, decided to join the College’s Master of Public Administration program. “I’d always subscribed to the mantra, ‘Be the change you want to see in the world,’ so the program appealed to the public servant side of me.”

And, when she graduated from the program in 1994, she put her studies to good use, working for the City of Charleston Department of Housing and Community Development to help residents of the East Side and West Ashley find affordable housing until she left for the University of Georgia to pursue her Ph.D.

“That was important work to me,” says Frazier, who has continued a life of service, volunteering for the Charleston County School District and serving on the Board of Directors for the Girl Scouts of Eastern South Carolina. As the first African American Congresswoman “Shirley Chisolm said, ‘Service is the rent we pay for the privilege of living on this Earth’ – and I really take that seriously. I believe in giving back. That is fundamental to who I am.”

Also fundamental to who she is: her passion for teaching. And so, returning to her alma mater in 2002 was a dream come true.

“Our College is an exquisite gem within the City of Charleston, and many a student has fallen in love with the CofC and never left, just like I did over 30 years ago,” says Frazier, an active member of the Gamma Xi Omega Chapter of Alpha Kappa Alpha Sorority. “I also love the gentility of the students. After every class, they always thank me before leaving the room. This is a sweet and heart-warming gesture, showing their appreciation for learning. They nor I take it for granted.”

Frazier’s teaching specialties include composition and American, African American and ethnic literatures – and her passion for photography has been known to be woven into her classes.

“I often focus on how to re-envision literature classrooms through connecting the texts we read with smartphone photography,” says Frazier, who – together with her husband – owns Vintage Noire Photography, and the pair contributed the photography expertise to the Enough Pie book, Tales From the Manor, showcasing the stories of Joseph Floyd Manor residents. “Students across disciplines increasingly use their smartphones as avenues of storytelling about themselves, their families, the environment and social justice advocacy. We channel the love of photography and use it to inspire our writing.”

Her hope for all her students is that they are inspired by great writers who “paint the world with words. If my students take anything from my classes,” she says, “I hope it’s that they have a confidence in writing.”

But that’s not the only legacy Frazier hopes to leave for CofC students.

“I would love to have an endowed scholarship that would in perpetuity support students with interests such as mine, in African American literature and photography,” she says, adding that she hopes the 1967 Legacy Program will also continue. “I would love it if that could be a legacy of mine.”