“Can you tell me about your life?”

These are not ephemeral, inconsequential conversations. Each has been recorded and transcribed for posterity as part of the Jewish Heritage Collection’s (JHC) Oral History Archive at the College of Charleston’s Addlestone Library. Rosenblum’s voice can be heard conducting more than a third of the nearly 500 oral history interviews, making an indelible imprint on an intimate and significant historical resource.

“I am blessed because I like listening to stories, it’s part of my personality,” she said during a visit to Addlestone Library’s Special Collections in November 2021.

Rosenblum’s efforts – and of those working behind-the-scenes transcribing, cataloging and publishing the recordings – have made JHC’s Oral History Archive a treasured resource for all seeking to discover Jewish life in the Palmetto State.

It is thrilling, to be sure, to discover a photograph or letter of a since-passed loved one. But JHC’s oral histories offer a chance to connect in a unique medium: the human voice. For a sense of the power of oral histories, consider never knowing your extended family, only to stumble upon a recording in which your relatives discuss their lives, creating a bridge between generations you didn’t know was possible. What would that experience be like?

Thanks to the work of Rosenblum and JHC, we need not guess. Countless individuals have discovered their forebears in JHC’s collections, listening to their family members’ voices for the very first time and becoming overwhelmed with emotion.

Rosenblum puts it plainly: “Can you imagine listening to your great-grandfather and great-grandmother talking together about their lives?”

Perhaps more than any other individual in South Carolina, Rosenblum, who is a non-traditional alumna of the College, having earned her degree in special education after raising a family, has worked to create these opportunities for connection uniquely afforded by oral histories. 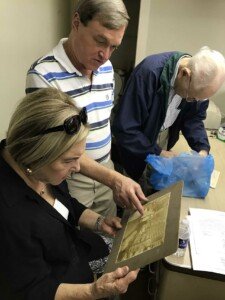 Rosenblum has traveled across South Carolina, interviewing nearly 200 individuals about their family histories.

What is an oral history, exactly? Take a broad definition of the term and one can argue swapping stories of the past is the oldest form of historical inquiry. Speak with a historian, librarian or archivist and they’ll tell you “oral history” refers to something specific: structured dialogs with an interviewer recorded in audio and/or video, designed to elicit the memories of people, communities and participants in past events. JHC interviewers follow a flexible set of guidelines that ensure consistency but allow conversations to flow in unanticipated directions.

And much has changed over Rosenblum’s tenure as JHC’s first and longest-serving volunteer.

The most noticeable evolution has been in the recording technology itself. Sharing stories may be as old as humanity, but the mechanism for capturing these stories has changed dramatically over the past three decades, as analog cassettes gave way to digital recorders and then mobile phones.

In the early years, hundreds of JHC interviews were committed to audio cassette tape. Transferring these analog recordings to a digital format is laborious, but the result is a boon to researchers – the interviews are now accessible to anyone with an internet connection.

Today, JHC’s oral histories are sought by researchers around the world – it is no exaggeration to say JHC has put the state, and more broadly, the South, on the map of Jewish America. This was not the case at JHC’s outset nearly three decades ago. How does one even begin such an effort?

Scouting contacts in and around Charleston was easy enough, but with a state-wide ambition for the program, Rosenblum and Dale Rosengarten, JHC’s founding curator, needed to sound a louder call for Southern Jewish American stories.

The pair didn’t want for takers, it turned out.

“Back in 1995, we worked with the then-new Jewish Historical Society of South Carolina (JHSSC) to set up community liaisons across the state to identify folks we should speak with,” Rosengarten says.

The response was immediate and deeply touching.

“I’ll never forget Harry Price in Spartanburg. We arrive, and he says, ‘We have 12 people lined up to talk to you. Don’t worry, they’ll come to you, we’re setting you up in the synagogue,’” Rosengarten recalls. “Price had organized it on his own initiative. Recording these interviews felt like gathering fruit ready for picking. People really wanted to tell their stories; they were simply waiting to be asked.”

Interview questions steer people through a life review, starting with their family story. Along the way, the conversation addresses topics such as immigration, acculturation, antisemitism and Jewish-African American relations. How did newcomers make a living? How did they navigate between Southern and Jewish identities? How did they adapt their religious practices to the winds of time?

The initiative began with a focus on the eldest generation, striving to capture the earliest history possible, including interviews with Second World War soldiers and liberators, as well as survivors of the Holocaust who settled in South Carolina.

“Immigrants and refugees, after the war, like my parents,” Rosenblum says. “These people had great stories, many of them had come with nothing and built a life … it was fascinating.”

The program’s interviewees are now often third-generation Americans; these conversations tend toward contemporary issues and events. Despite the upheavals of COVID-19, Rosenblum continued documenting the origins and evolution of Charleston’s newest congregation, Dor Tikvah.

Recorded interviews in the Oral History Archive touch upon momentous events here in South Carolina and around the world. So, it is not surprising that, today, some potential interviewees are hesitant to add their stories, believing them to be insufficiently interesting.

Rosenblum counsels against believing one’s history to be “important” only if you’ve lived through a tumultuous event.

“I hear it all the time, ‘I have nothing to say!’” she laughs. “But there’s always a story. Realize that you are living history. It’s going to be important; everyone needs to keep this in mind.”

CofC’s Special Collections, home to JHC, is one of the premier repositories in the Southeast, chronicling more than 300 years of the Lowcountry’s history via manuscripts, ephemera, visual materials and more. Among these treasures from the past, oral histories stand out; they offer an intimate connection.

It began, fittingly, with a conversation.

Following JHSSC’s successful launch in 1994, founding president Isadore Lourie and Alex Sanders, former College of Charleston president, spoke with Rosengarten about implementing a project headquartered in the College’s Special Collections to document the lives of Jews living in cities, towns and rural outposts across the state. With the society focused on hosting events, producing newsletters and fostering community among South Carolina Jews, Rosengarten seized the opportunity to collect and preserve the archival materials and stories of these individuals and communities.

Rosenblum recounts: “I said, ‘I want to be involved in this, I believe this is important.’ So, Isadore introduced me to Dale, and I said to Dale, ‘Just tell me where you need me.’ And she replied, ‘Why don’t you come do oral histories?’”

Now, after recording hundreds of hours of oral histories, traveling several thousand miles back and forth across the state, and spending countless days with strangers and friends, Rosenblum sums it up: “Twenty seven years, it’s mind boggling, but I’ve enjoyed every minute of it.”

“Sandra Lee and I have made a great team,” Rosengarten says. The long road trips, the frequent overnight stays in liaisons’ houses, the schedule of up to three multi-hour oral histories a day – this was a labor of love. “We had such a blast taking those trips together, and with Alyssa Neely now as JHC’s editor and producer, the Oral History Archive is preparing to enter a new, energetic phase.”

Rosenblum’s visit to Special Collections in November 2021 was a long overdue table-turning — this time it was she who was being interviewed.

Chatting with her, it is no surprise nearly 200 folks have opened up to Rosenblum to divulge the history of their lives. Perhaps it’s her emerald green eyes, the gentle lilt of her voice; she looks and sounds like your favorite primary school teacher, the one who made you love to learn. There’s something about her that is immediately and undeniably warm and welcoming.

“If you sit down with someone for an hour and they tell you about their life, you’ve got a new friend,” she says.

Across South Carolina, these recording sessions have created a network of friends and relations, building bridges between and across generations. In some ways, these conversations offer interviewees a type of immortality and the satisfaction of having passed on their stories and those of their family.

“In the 30 years we’ve worked together, I have never met anyone who doesn’t love Sandra Lee,” Rosengarten says without exaggeration.

But the work’s not over. In many ways, it has only now begun. Just ask Rosenblum: As she readies to leave her interview in Special Collections this past November, she mentions an oral history slated for the following week.

The Jewish History and Heritage Campaign, a joint effort of the Jewish Heritage Collection and the Jewish Historical Society of South Carolina, supports the efforts of volunteers like Sandra Lee Rosenblum to preserve and share the stories of Southern Jewish Americans. Learn more at give.cofc.edu/JHHC.