Between summer research projects and required credit hours, STEM majors don’t have a whole lot of time left over for study abroad. But, with the College’s intensive environmental chemistry and sustainability program in Ecuador, all they really need is two weeks. 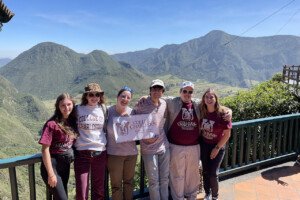 Professor Kate Mullaugh with students in her undergraduate chemistry course at the Geobotanical Reserve of the Pululahua Volcano. (Photos provided)

“Everything we did was with the goal of modeling sustainable travel for our students,” says Veal, whose contacts in Ecuador helped form partnerships for the program while Mullaugh worked out the logistics of transporting equipment and supplies through airport and customs security.

“I worried about our supplies getting through customs, as an X-ray of our equipment and supplies could look quite nefarious,” says Mullaugh, who put a letter of explanation in each piece of luggage together with a safety data sheet.

Mullaugh also wanted to make sure they operated as responsible chemists. Rather than testing for nitrates using a common substance that contains cadmium, a toxic chemical, she sourced a test that uses an enzyme and could be disposed of as household waste.

All that sustainable, responsible preparation was in stark contrast to what the program’s first cohort of six graduate and five undergraduate students found when they arrived in Ecuador in August of 2022. In fact, the toxic waste left behind by oil companies was perhaps the most eye-opening experience of the entire two weeks.

“The environmental injustice stood out,” says Crystal Herron ’13, a science and math for teachers graduate student. “The oil sludge left behind leeched into the soil and is impacting people’s drinking water. This sad reality really shows how science impacts society and economics.” 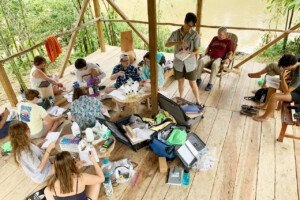 “I was shocked that companies were able to leave such a mess,” adds Casey O’Brien, a biochemistry major and Spanish minor, who was concerned about the health implications of the oil seepage, since its residue is now incorporated into the soil on many family farms that grow food for both personal consumption and the broader market.

“We wanted them to see the contrast of industrialization and how sustainability has changed and will continue to change,” says Veal. “The students left with the ultimate question of whether having the oil companies come was sustainable. The answer is yes for the country, but no for the community.”

A greater appreciation for how science, culture and sustainable practices influence the world around them wasn’t the only takeaway for the students, though.

Herron, for example, learned methods and ideas that she can apply directly to her middle school classes. While visiting the Amazon’s Mandari Panga, she and the other students noticed that – due to processed food being brought in from the cities – litter had accumulated around a school.

“Before getting goods from outside of the community, everything they used was biodegradable, so the concept of litter is new,” explains Herron, who – together with two other graduate students – met with community members to learn what types of messages would resonate with the people there. During one meeting, they learned that children play with gourds like a top, and they hit on the idea of using the top-game to generate awareness. “We decided to create a game to teach the importance of picking up litter.”

The students also gained quite a few intangibles from their experiences in Ecuador, too. 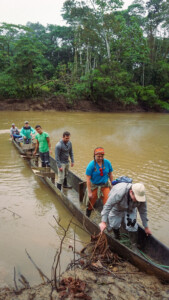 A group of students arriving back to Mandari Panga Ecolodge after a morning of bird watching.

Take, for example, the close connection that O’Brien, recipient of scholarships like the Haisten Family Scholarship and Samuel Freeman Trust, felt when he visited Iglesia de Santo Domingo – the church his grandmother attended before emigrating to the United States. Still more transformative for him, however, was the time he spent getting to know the people of El Pacer, a village made up of a series of corrugated tin-roof homes. He was especially struck by their generosity, despite the village’s low income and lack of modern resources.

“They were some of the happiest people I ever saw. There is no division between households. No one had locks on their doors, and little kids wandered in and out of people’s homes,” says O’Brien, who was also impressed by the self-sustainability of El Pacer. “When COVID hit, they were able to make their own bubble. They used their farm and resources and didn’t need to interact with the outside world for the first six months of the pandemic.”

Without question, the trip to Ecuador taught the students a lot about how incredibly intertwined our health, community, science and sustainability are. And they are all incredibly grateful for the opportunity.

“I had always wanted to study abroad, but with my major, it was hard to fit in,” says O’Brien. “This two-week program was perfect.”