The international peer-reviewed journal iScience published a paper on Monday, Sept. 26, 2022, by a research team led by College of Charleston geology professor Scott Persons that details the discovery of a new kind of  prehistoric marine reptile.

Measuring more than 23 feet in length, Serpentisuchops (sur-pen-ta-soo-kops) was a sea beast that swam the seas while dinosaurs walked the earth 70 million years ago, and the discovery is changing what paleontologists thought they knew about a group of animals called plesiosaurs.

“When I was a student,” says Persons, “I was taught that all late-evolving plesiosaurs fall into one of two anatomical categories: those with really long necks and tiny heads, and those with short necks and really long jaws. Well, our new animal totally confounds those categories.”

Serpentisuchops, whose name literally translates to “snakey crocodile-face,” has both a long serpentine neck and long crocodile-like jaws. That makes it an evolutionary oddball and a surprise for scientists. 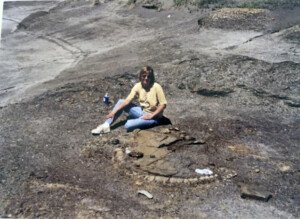 Anna Pfister with the plesiosaur fossil discovery in 1995.

The remains of the category-defying creature were unearthed from a sulfuric patch of badlands in eastern Wyoming. That land belonged to a rancher, Anna Pfister, who donated the fossil to the Glenrock Paleon Museum, where Persons is a research curator. It is for this donation that the animal gets its full two-part biological name: Serpentisuchops pfisterae. At the museum, a hard-working team of volunteers set about chipping away the rock that incrusted the bones and readying the specimen for scientific study. These volunteers included a group of elderly women, affectionately known as the “Glenrock Bone Biddies,” who have formed the paleontological equivalent of a sowing circle around preparing fossil bones for study. It was during this preparation stage that the weirdness of the skeleton became apparent.

The whole of the neck skeleton is beautifully preserved with each bone in articulation with the next one in the series.

“The neck vertebrae just kept going,” says Persons. “For comparison, your own neck has a mere seven vertebrae. Serpentisuchops has thirty-two.”

The extraordinary preservation of the speciman was possible because, after the Serpentisuchops carcass sank to the seafloor, it was buried by fine-grained sediments and remained utterly undisturbed, until its discovery 70-million years later.

During the life of Serpentisuchops, a shallow sea covered much of North America’s interior. Many other marine reptiles swam in those waters. Besides other plesiosaurs, of both the long- and short-necked variety, there were multiple kinds of mosasaurs – giant marine lizards. The Western Interior Seaway was a tough and crowded neighborhood. The paleontological team speculates that the abundance of other competing marine life may have been the very thing that led to the new plesiosaur’s unconventional body plan.

“It’s called ecological niche partitioning,” explains Persons. “To avoid direct competition with each other, species have a tendency to evolve adaptations that let them access or specialize in a particular source of food, or other resource, that other species struggle to make use of.” 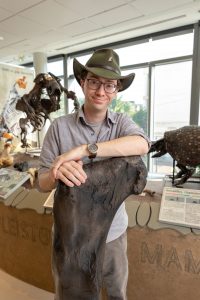 What sort of resource did the combination of long jaws and long neck allow Serpentisuchops to access? The researchers, which includes Persons’ wife, CofC adjunct professor of biology Amanda Kelley, think it was especially good at snagging smaller and quick-swimming prey, like tiny fish or squid.

“The articulation joints between the basal neck vertebrae grant a lot of lateral flexibility,” says Persons. “You combine that with broad vertebral attachment surfaces for powerful neck muscles, and you have an animal that can rapidly swing its neck side-to-side. The elongate and narrow jaws extended the animal’s reach that much farther and could be swished through the water with a minimum of drag. What I think we have here is a fast, effective, sideways-striking fish snapper.”

But recognizing that there was a third kind of plesiosaur has other implications. Paleontologists, studying other species that are known from only isolated or neck-less fossil material, have generally assumed that, if their plesiosaur has long jaws, then it also must have a short neck. Serpentisuchops proves that’s not necessarily true. As the research team notes in their scientific description of the new find, multiple older plesiosaur species now need to be carefully reassessed to make sure these animals’ neck sizes haven’t been underestimated. Once that’s done, Serpentisuchops may prove to be much less unusual. 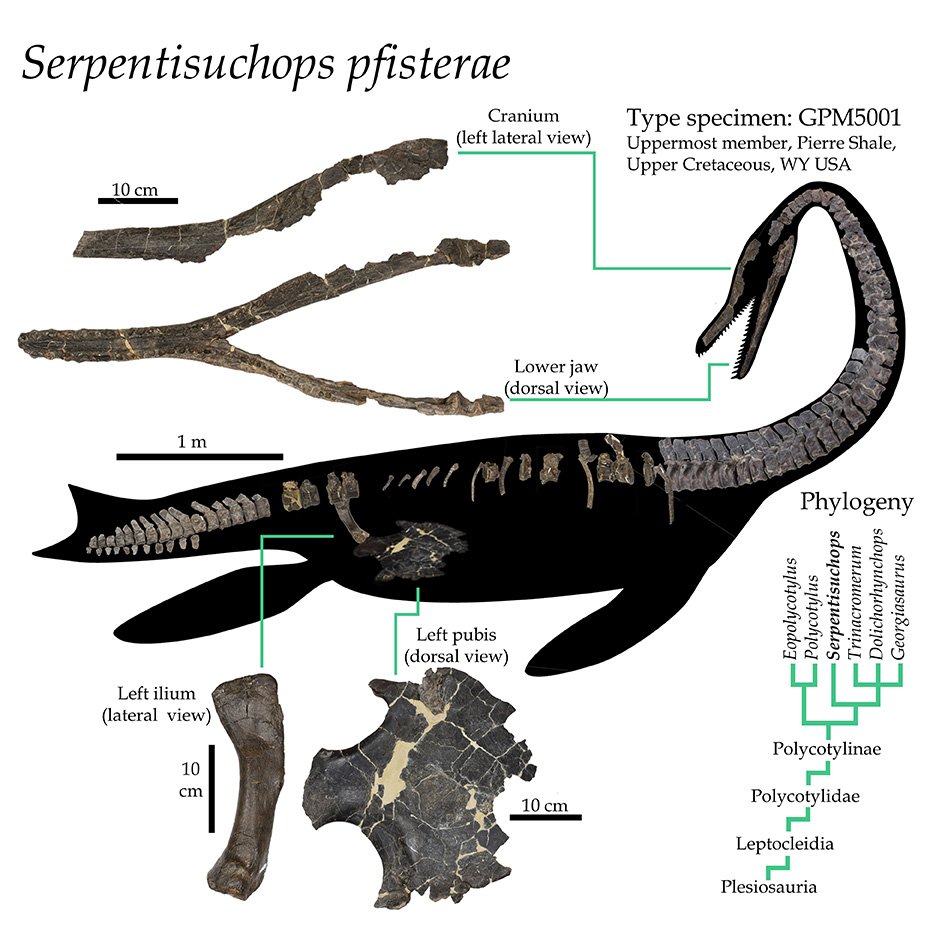