When the College of Charleston men’s basketball team takes the court against Chattanooga at TD Arena for their first home game of the season on Nov. 7, 2022, fans will be able to score a few points of their own for sustainability. Thanks to graduate student Nicole Killen and her thesis project about recycling behavior within TD Arena, there will be $30,000 worth of new CofC branded recycling and trash receptacles throughout the facility – 17 total.

“I am really interested in behavior change when it comes to sustainability and the daily actions and lifestyles that people have and how small changes can have a big effect,” she says. “Sustainability and climate change can seem like big things for people to tackle that they don’t even know where to start, but if we all can do small things every day, there can be a big payoff.” 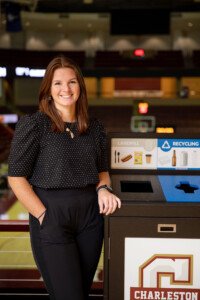 It was her thesis adviser, economics Professor Calvin Blackwell, who introduced Killen to something called nudge theory to get people to change their habits. (It was popularized in a 2008 book called Nudge: Improving Decisions About Health, Wealth, and Happiness by Richard H. Thaler and Cass R. Sunstein.) Based in behavioral economics, the concept is about getting people to act a certain way without explicitly asking them.

“That can be just something that makes it more convenient or attractive, or more of a social norm or even just putting up a sign that draws people’s attention to get them to do what you want them to do,” says Killen. “It just gave me so many ideas of how we could increase sustainability here on campus.”

A native of Strasburg, Virginia, Killen graduated from Christopher Newport University in Newport News, Virginia, in 2019 with a bachelor’s degree in environmental biology. That’s where she also developed an interest in sustainability, particularly on college campuses. She came to the College to earn her master’s in environmental and sustainability studies at the suggestion of Jen Jones ’12 (M.S.), who was the sustainability coordinator at CNU and is now back at CofC as the director of the Center for Sustainable Development (CSD).

“When she told me she was looking for a place for grad school I thought CofC was a great match for what she was looking to do and knew she would have the support of a sustainability office here,” says Jones, who served post-master’s on the team that created the Office of Sustainability at CofC. “So, I knew a lot about the sustainability workings on campus and knew that there was a very student-forward approach that allowed space for students to play active roles in moving the campus toward sustainability.”

It was former CSD director Darcy Everett who mentioned to Killen how they wanted to write a grant to get new recycling bins in the arena. Killen wound up getting $10,000 from the South Carolina Department of Health and Environmental Control, which was matched equally by both CSD and the College’s Department of Athletics.

Working with Richard Bouknight, the assistant athletics director for event operations and facilities, and a company called Clean River, Killen got the exact look, branding and signage of specific items sold at the arena to “nudge” people to step up their recycling game. Previously, she says there were just a few differently sized and colored bins scattered around the arena, none of which screamed “fill me!”

“We did a baseline study last year to kind of see what we were expecting from the bins being in place,” says Killen. “Even just the amount of paper that comes out of that place during a game is insane, and Richard wanted to be a leader in moving sustainability forward at the College because TD Arena hosts some of the biggest events.”

“I love her project because we take for granted how much effort it takes to get people to behave the way we want/need them too,” says Jones. “Even with sustainability-related behaviors the literature shows over and over again that knowledge about sustainability is not enough to change behavior. So, looking at the infrastructure changes that we can make to nudge people in the right direction is really the next wave of sustainability work. I’m so excited to see the results and learn from her project.”

And even if the Cougars lose on the court, the College and the planet are still winners.

“Sustainability can’t happen in isolation,” says Killen. “It definitely has to be something that’s acted on with a united front. The world is changing whether we want to realize it or not. It’s just kind of our last chance to be able to do something about it – environmentally, economically or socially. It’s just a question of figuring out the best way to actually take action and create change.”