Congressman Jim Clyburn during a recent visit with students at the College of Charleston gave an intimate account of the ins and outs of government and politics and outlined how the next generation can shape the future.

“You have to work on it,” he said of protecting democracy. “It requires activity. It requires you to be a part of it.” 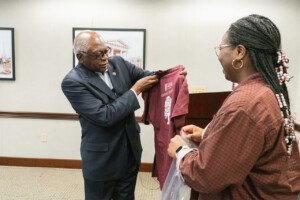 A student in the 1967 Legacy Program presents Rep. Jim Clyburn with a CofC T-shirt. (Photos by Mike Ledford)

Clyburn, whose sixth congressional district recently expanded to include the College’s downtown campus, spoke with more than 20 students in the College’s 1967 Legacy Program on Monday, Oct. 17, 2022. His visit, which was co-sponsored by the President’s Office and the Office of Institutional Diversity, was coordinated by Ronald Thompson, a champion of the 1967 Legacy Program, which aims to improve the recruitment, retention, graduation and workplace success of Black students.

Thompson said he hoped the students would learn from the Congressional Majority Whip about the power they have as voters and the impact they can have on government leaders as future activists and advocates.

“What we need to know is that politicians work for us work, for the people,” said Thompson. “I want you all to know from him what power resides in you as the electorate and how you use that.”

Clyburn outlined his journey from growing up in Sumter, South Carolina, to being a history teacher in Charleston to eventually becoming a senior member of the U.S. House of Representatives. He also highlighted connections between history and present-day politics, urging students to take action if they are unsatisfied with how partisan politics is impacting laws and policies.

During a Q&A session, students asked the longtime congressman a variety of questions about everything from the Electoral College to whether the two-party system is disenfranchising voters to the number one problem with colleges today – which he replied was a lack of time spent on “basic civics and citizenship.” 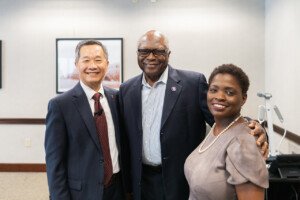 The most important thing Clyburn said he wanted the students to take away was the value of collaborating and problem-solving with people from differing points of view.

“We will be no more, nor will we be any less than what our experiences allow us to be and because of that each one of us should take it upon ourselves to reconcile whatever differences those experiences may be visited upon our neighbors, our classmates, our schoolmates, our fellow citizens or our fellow Americans,” he said.

Named for the year CofC integrated, the 1967 Legacy Program is a four-year, intensive program that provides selected African American students with academic support and opportunities as well as personal and career enrichment.

Valerie Frazier ’91 (M.P.A ’94), English professor and director of the 1967 Legacy Program, says interactions with African American trailblazers such as Clyburn are essential to helping empower the next generation of African American leaders

“Congressman Clyburn believes that our experiences shape us into who we are and that history is cyclical,” said Frazier. “There are through lines in the past that we repeat often, and he believes that cultural memory is essential to our future success.”

“His strategy for success in approaching people of different walks of life is to talk to them honestly and ask them about the problems and the solutions for today’s challenges,” she said.