Above: Federico Betancourt looks at his 1966 album cover of Llegó La Salsa.

College of Charleston Hispanic studies professor Yulian Martínez-Escobar has fond memories of salsa dancing in his native country of Colombia, but he has also found those same rhythms right here in the Palmetto State. Early in 2021, Martínez-Escobar was chatting with a Colombian musician in Columbia, South Carolina, who happened to mention that he played in a trio with a very interesting man — Federico Betancourt, known as the father of salsa in Venezuela. 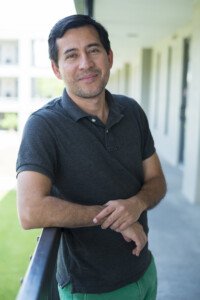 “I looked him up,” says Martínez-Escobar, “and I realized that I had been dancing to his music for over 30 years without knowing it.” Martínez-Escobar lists Betancourt’s song “Federico Boogaloo” as one of the most popular salsa tunes played across the world.

Betancourt appears in numerous history books as one of the first people to use the term “salsa” to refer to this type of Latin American music, but not many people know about this legendary musician. Martínez-Escobar was intrigued.

“I’m always looking for stories to tell about Latinos,” he says. “I wanted to learn more about him and to see if he was interested in working with me.”

In addition to his work at CofC, Martínez-Escobar has a passion for the visual arts, especially filmmaking. His interest in film first began as an actor in his college’s theater company. His enthusiasm for visual storytelling led him to the Center for Documentary Studies at Duke University, where his program culminated in his first film titled Our Sundays, a story that follows a diverse group of men in Charleston coming together for the love of soccer.

Though he was working on other film projects at the time, when Martínez-Escobar learned about Betancourt, he knew he wanted the musician to be the subject of his next documentary. He spoke to Betancourt’s daughter, Jacqueline Betancourt, who had brought him to the United States, about the possibility of interviewing him about his life and his legacy. They were instantly on board. 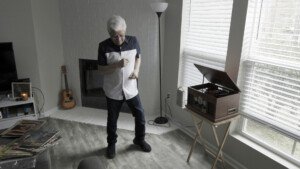 Martínez-Escobar and a small team of videographers spent several months chatting with Betancourt, 82, and following him to his gigs around Columbia.

“There are many Latinos in the Columbia area” explains Martínez-Escobar, “and salsa is the rhythm people love to dance to.”

On Tuesday, Nov. 1, 2022, Martínez-Escobar will premiere his 32-minute documentary on Betancourt, Llegó Federico y Su Salsa (Federico and His Salsa Have Arrived), at the College, with Betancourt in attendance. The showing will take place at 6 p.m. in room 118 of the Thaddeus Street Jr. Education Center Education Center, located at 25 St. Philip Street. Following the film, students from the Department of Music will perform a special salsa piece. The event is free and open to the public.

And Martínez-Escobar’s documentary on Betancourt is just the beginning — he’s already working on several more.

“I want to tell as many stories as possible,” he says. “I feel privileged to be the voice of unseen Latinos in the American South. This is why I do what I do.”