Take artistic creativity, add in computer algorithms and you get the computing in the arts (CITA) major. Jo Jackley, a current College of Charleston senior and CITA student, has a passion for both artistic expression and computing. She describes computing in the arts as “a computer science degree splashing in some artistic interests … you’re just given an emphasis on how to combine an artistic element.” 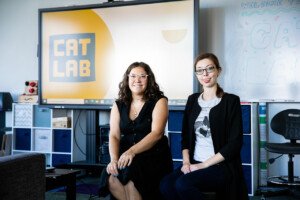 Sarah Schoemann, assistant professor of computer science, and computing in the arts major Jo Jackley in the Critical Art and Technology Lab. (Photos by Catie Cleveland)

And the CITA major’s game development and interaction concentration has allowed her a space to blend her interests into a single experience. This summer Jackley, who is a student in the Honors College, worked over 10 weeks alongside Sarah Schoemann, assistant professor of computer science, on a research project called MYdata. Jackley describes MYdata as a data collection app that combines a phone app with a wearable wrist device. Using the resources provided in Schoemann’s Critical Art and Technology (CAT) Lab, Jackley gained experience with coding and software development to create the app. She also learned hardware skills to build the wearable device, which she made using an Arduino microcontroller with Bluetooth low energy connectivity.

Inspired by an artistic project conducted by data scientists Giorgia Lupi and Stefanie Posavec called Dear Data, which used hand-drawn postcards to visualize personal data of the two women such as how often they laughed in a day, MYdata offers users a chance to digitally capture and display their own personal collection of data throughout their day such as the number of times they crave a cigarette or are talked over at work.

The MYdata app comes with a wearable bracelet that allows the user to decide what data to record. The user can assign the meaning of their data and then record a timestamp of when it occurs using a button on the bracelet. From there, users can make visualizations to further represent the data collected, whether for personal reflection or artistic expression.

“It sort of democratizes the idea of data collection,” says Schoemann, noting that data belongs to everyone, not just scientists and doctors. “I want there to be lots of options for people to be able to show their data in whatever way they want to.” 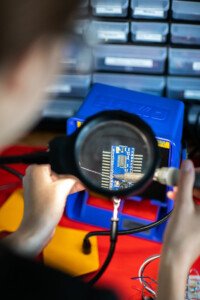 Jackley works on building components of a device in the CAT Lab.

And Jackley got to put her coursework to use in a tangible way with the MYdata project. It proved to be both challenging and empowering for her.

“There’s two scary points in coding, in my experience,” says Jackley. “The first one is when you’re new to it, trying to figure out the syntax and suddenly you get stuck. It takes a little bit of finagling to figure out how it works. The second is when you start using a bunch of code you haven’t written and getting into projects of over 1,000 lines –  it becomes less intuitive … But once you get over those things, it’s really fun and really enjoyable.”

Schoemann’s research background is in video games, but her interests also toggle between wearable technology and tangible interfaces. And she wants her work to help address social issues and change social agendas. For example, she’s working alongside CofC’s Women’s Health Research Team to develop a dating sim game to teach people who menstruate about their options for contraceptives.

As a woman in a male dominated field, Schoemann wants to make the game development and interaction concentration a welcoming environment for all genders.

“I think it’s important to have women in leadership roles, modeling that this is a space that’s welcoming and that women can be innovators,” she says.

As part of the concentration, Schoemann instructs classes such as Game Programming and Animation and Virtual Worlds. Upon completion, students leave with resume building projects that involve 3D modeling and creating digital worlds and characters. In the Game Programming course, students do a series of small game prototypes, like a simple ball rolling game. In the second half of the semester, they work in teams to come up with a game of their own design. 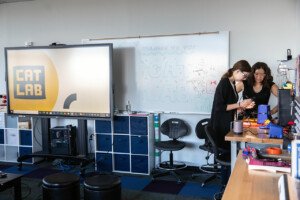 The CAT Lab is a maker’s space where students interested in a variety of disciplines can come and create something new.

“When you come up with a game design on your own, you have to sort of really work from scratch in terms of figuring out what your needs are for your game and how you can create something new and different,” says Schoemann. “It’s very challenging from a programming perspective, but they get to come up with interesting, original ideas.”

Bill Manaris, CITA program director, says the CITA major is a reflection of the reality that 21st century artists use computing devices as their medium to create their work. Computing in the arts allows students who are artistically inclined the option to pursue their dreams, such as video game development, while giving them the foundation they need to be competitive in a more traditional computing career.

Manaris advises anyone interested in joining the CITA major, specifically the gaming concentration, “To be open minded, because you have been playing games all your life, so you’re attracted to this and you want to make only games, but be ready to experience new things. Some of these classes are going to put you in spaces you haven’t experienced before, and maybe you will find your home there.”

Jackley plans on pursuing software development when she graduates in May of 2023. Her experience building the MYdata app and device along with her hobby of developing tabletop role play games have sparked her interest in game mechanics and designing the overarching game feel. Seeing how visual art, code and game design all come together has become her “home.”

“Working with Dr. Schoemann has really reaffirmed my career goals,” she says.