Meleana Cabales was scrolling through YouTube earlier this year when the song “Madaling Araw” by Francisco Santiago popped up in her recommendations. Curious, she clicked on the link.

“I was hooked from the first listen,” she recalls. “It vaguely sounded like something I’d sung before, but it was also familiar for other reasons. The lilt of the piano reminded me of the waltzy karakol, a processional used at our family’s fiestas. The singer’s sentimentality reminded me of the passionate karaoke numbers I’ve heard at numerous Filipino parties. This nostalgia for a song I was hearing for the first time was hard to ignore.”

Cabales, a College of Charleston music major concentrating in vocal performance, became interested in Filipino music traditions while taking an ethnomusicology class taught by Michael O’Brien, associate professor and chair of the College’s Department of Music. As it turns out, “Madaling Araw” is part of a little-known genre of Filipino art song (voice and piano) called kundiman. With the help of the School of the Arts‘ new Diversity, Equity, and Inclusion (DEI) Grant, which supports collaborative faculty/student research, Cabales, who is of Filipino and Samoan descent, embarked on a semester-long research project with O’Brien to learn more about a genre of music tied to her own cultural heritage. 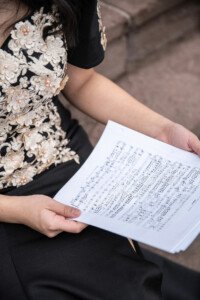 Meleana Cabales will give a lecture-recital on kundiman, a genre of Filipino art song, on Sunday, Dec. 11. (Photos by Catie Cleveland)

The project will culminate on Sunday, Dec. 11, 2022, at 3 p.m. with Cabales presenting a lecture and recital on kundiman at Trinity United Methodist Church, 273 Meeting St. The 45-minute recital will highlight five art songs along with a presentation on the historical and musical significance of the genre. A reception with Filipino food will follow.

“The School of the Arts DEI committee wants to provide direct student support for meaningful DEI engagement through the arts,” says Kristin Alexander, assistant professor in the Department of Theatre and Dance, who chairs the DEI committee that awards the DEI Grant. “Meleana’s proposal stood out because not only would her performance introduce kundiman to our community, but she personally wanted to connect with her cultural heritage.”

Kundiman emerged as a folk tradition in the Philippines during the period of Spanish colonialism but developed into a formal art song in the 20th century. This can be attributed to the influence of American musical education on two hallmark Filipino composers: Nicanor Abelardo and Francisco Santiago. Formal conservatory training, exposure to high quality performances and study opportunities in Europe and the United States refined their compositional skills. The evolution of kundiman into a national art song helped distinguish Filipino identity after centuries of forced assimilation and cultural cross-fertilization.

Cabales’ research focused on music’s influence on post-colonial national identity in the Philippines and analyzed poetry to find common meaning between songs. She also talked with her Philippines-born family members about the language and translations of kundiman songs.

This rich cache of art songs hasn’t surfaced in the classical canon, despite significant Westen musical influence, which is why O’Brien was excited to support Cabales in this project. Its history makes it both musically and culturally interesting. 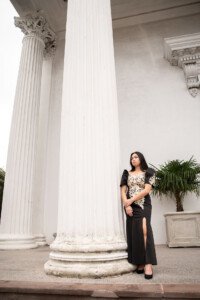 “In this project she’s found a way to unite two essential parts of her own identity, that of a Filipina and that of a classical singer,” says O’Brien, adding that the project helps advocate for a more diverse future for classical singing and for university music programs. “Even 20 or 30 years ago, most American university departments of music were really departments of ‘Western European classical music,’ and mostly taught and played by people of European descent. We’ve made big strides in changing that, although there is much work left to do. Meleana’s project is an example of how much we all stand to gain by seeking out and championing less represented voices. I think that audience members of all backgrounds will come away with a new appreciation for a beautiful and fascinating repertoire from a part of the world that classical music fans really should know more about.”

Through this event, Cabales, who is a student in the Honors College, hopes to build a closer relationship with her cultural heritage and introduce kundiman to listeners who would otherwise never be exposed to it.

“There is – and will always be – so much more to discover about this genre. But I’m just grateful for how much we’ve discovered this semester,” she says. “As an American-born citizen with both Filipino and Samoan heritage, cultural identity is so important to me. Everyone wants to know their roots, and I’m no different. But being in the racial minority, you don’t see yourself represented in the same way your peers do. Sometimes you grow up thinking of yourself as an outsider. That solitude is hard to escape unless you decide to do something about it. This project gave me the chance to reclaim a significant part of my identity and celebrate it!”