Guenveur Scholarship Continues to Make a Difference in the Neighborhood

In 1925, Edward Leon and Lauretta Goodall-Guenveur, graduates of the Avery Normal Institute – the first accredited secondary school for African Americans in Charleston, South Carolina, purchased 57 Coming Street, located two blocks from the College of Charleston’s Randolph Hall. The house, which had originally been built in 1772 and then reconstructed using the original home’s timbers in 1884, served as the base for the independent plumbing business the Guenveurs founded and the home for their five children: Florence Louise (Louise), Helen, Anna Mae, Edward Leon Jr. and Loretta Ruth.

With Edward Leon as the master plumber and Lauretta as the office manager, the family plumbing business thrived. Their timing couldn’t have been better as many households and businesses in Charleston needed indoor plumbing installed. 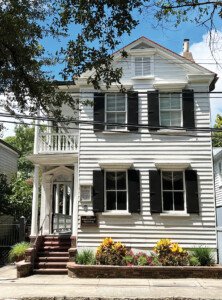 Louise Guenveur Streat, who passed away in 2016, recalled how her family went to school, church and shopping within an eight-block radius of their home. She remembered how her parents gave freely to the community, especially how they frequently failed to get around to sending a bill for plumbing services for their elderly customers or the convent, rectory and school of Immaculate Conception and St. Peter’s Catholic Church.

“We were a neighborhood,” said Streat.

All five Guenveur children went on to university, but not at the College of Charleston, which remained racially segregated until 1967. They shared their parents’ passion for learning. Louise and her husband, William A. Streat Jr., were long-time professors at Bennett College and North Carolina A&T, respectively. Both Anna Mae and Loretta Ruth went on to become educators.

All five children moved from Charleston to pursue professional opportunities elsewhere. After Edward Leon Guenveur Sr. passed away in 1969, Lauretta moved to live with her grown children. Members of the family would periodically visit Charleston and stay at 57 Coming. Each visit bore witness to the College’s expansion and the changing face of the neighborhood.

As an homage to their parents’ passion for their neighborhood and the power of education, in 2000, Streat and her siblings established the Edward Leon Guenveur, Sr. and Lauretta Goodall-Guenveur Endowed Memorial Scholarship. The scholarship, which honors the value the Guenveurs placed on education and hard work, is awarded to a rising CofC senior from Charleston County who has maintained the highest academic average after three consecutive years.

“The generosity of Louise Guenveur Streat and her brother and sisters honors not only the memory of their parents but also demonstrates their own conviction to supporting scholarship and education for students from the Lowcountry,” said then College of Charleston President Alex Sanders. “We have made tremendous progress since the days when none of them, despite obvious talents and abilities, would have been able even to apply to the College of Charleston.”

“May this scholarship continue to benefit earnest, stable scholars who study within this tiny eight block square we call ‘The Neighborhood,’” said Streat at the dedication ceremony. 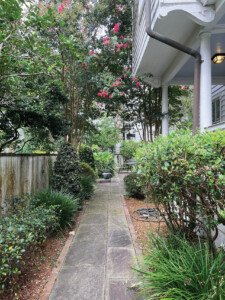 The garden at 57 Coming Street.

“My aunt learned early, from the example of her parents, to share one’s resources,” says Streat’s niece Louise Smith. “She and her siblings established the scholarship at the College of Charleston in memory of their parents, who took the matter of educating their family seriously. In turn, the Guenveur children hoped with the scholarship to encourage and reward the type of excellence their parents had modeled and espoused.

“She particularly valued the liberal arts because she felt the study contributed to the development of the total person and to our ability as a society to understand the past and navigate the future,” adds Smith, who also notes that her aunt endowed scholarships at four historically Black colleges. “She once offered two statements to sum up her philosophy of life: ‘Education links us to realms of memory and lasting values’ and ‘Life is a precious gift, much too short to be wasted.’ Even as she approached her nineties, I never knew her to veer from that course, nor hesitate to encourage me to take heed as well.”

Aly Nida, the 2021-22 recipient of the Edward Leon Guenveur, Sr. and Lauretta Goodall-Guenveur Endowed Memorial Scholarship, appreciates the values and intent behind the scholarship.

“The creation of this scholarship and dedication to ensuring that students at the College are relieved of some of their many financial burdens is deeply admirable,” says the astrophysics major. “The support you have provided and the care that you have put into this program are second to none, and I am thankful for the opportunity given to me.”

Having the scholarship gave Nida the flexibility to take more high-level classes at the College, classes that would otherwise have been behind a financial barrier. After graduation, Nida plans to pursue a doctorate in astrophysics, ideally researching exoplanets, and then follow a career path in the same field working at an observatory or research institute.

In addition to the scholarship, in 2004, the home at 57 Coming Street, which Streat’s husband, an architect, had brought up to code with a preservationist eye — leading to a Carolopolis Award — was sold to the College of Charleston Foundation, and thanks to the generosity of Louise Guenveur Streat, adapted to faculty use. At the time of the sale, the College had expanded to be across the street from the Guenveur home, forever transforming the neighborhood.

“I now leave this home in the hands of the College of Charleston, with the admonition to use it well — the return will be as with the loaves and fishes, a thousandfold,” said Streat at the dedication.

For the last 16 years, the Edward Leon Guenveur House has served the Department of Psychology well and the Lauretta Goodall-Guenveur Garden has been a place of respite for the College’s students, faculty and staff.

Neither Streat nor her siblings attended the College and at the time couldn’t have even if they’d wanted to due to racial segregation policies. “Yet, the College, as a neighbor and ever-present thread in the fabric of her [Streat’s] beloved hometown of Charleston, had its own important role,” says Smith of her aunt. “In her youth, despite the College’s policies, its proximity served her as an ‘inspiration for higher learning’ — which would have been typical of my aunt’s optimistic attitude, dwelling on the positive rather than the negative.

“The family lived productive, devout and loving lives in a Charleston community that has now virtually disappeared,” adds Smith. “And in the shadow of an institution that barred them. Rather than turn her back on that complicated history, my aunt chose to shine a light in it, and actively preserve and perpetuate the values she learned while living it.”

The College holds a deep debt of gratitude to visionaries like Louise Guenveur Streat and all her family.