Above: Marty Perlmutter (second from left) in 2017 at a Food and Faith event co-sponsored by the Yaschik/Arnold Jewish Studies Program.

Marty Perlmutter, former College of Charleston faculty member and director of the Jewish studies program, died on Sunday, Jan. 15, 2023, at the age of 79. 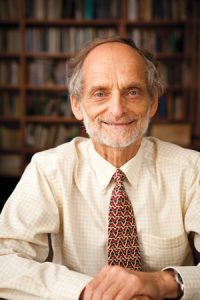 Perlmutter joined the College in 1979 as a member of the Department of Philosophy and in 1983 became chair of the department. In 1991, he agreed to take over the leadership of the Jewish studies program, in addition to teaching philosophy courses.

With Perlmutter at the helm, the Jewish studies program flourished.

“Marty was the reason we are all here,” says Yaron Ayalon, current director of the College’s Yaschik/Arnold Jewish Studies Program. “He knew how to enlist community and college leaders to create and grow Jewish studies. It was under his leadership that the Jewish student body at CofC grew from less than two dozen to over 500, that Jewish studies courses and a major were introduced, and that we now have a permanent home for Jewish studies on campus: the impressive 24,000-square-foot Sylvia Vlosky Yaschik Jewish Studies Center, where dozens of programs that engage the campus and Charleston community take place every year.

“Our faculty and staff are honored to continue Marty’s legacy,” continues Ayalon. “We will miss his endless dedication and enthusiasm.”

Perlmutter’s visionary leadership forged lasting relationships between the campus community and greater Jewish community in Charleston. And in 2016, the College celebrated the opening of Marty’s Place, a vegetarian/vegan kosher dining hall named in his honor.

“With the passing of Director Emeritus Marty Perlmutter, the College of Charleston has lost an iconic figure in the institution’s history,” says CofC President Andrew Hsu. “Marty was a gifted teacher, philosophy scholar and longtime leader of the Jewish studies program during his tenure at the College, from 1979 to 2019. He did a remarkable job connecting the Jewish community to our campus, and we are proud that the College’s kosher/vegetarian/vegan dining facility bears his name. He will be sorely missed, but his legacy lives on.”

Perlmutter is survived by his wife, Jeri, and four children: Jake, Aaron, Daniel and Estee.

The funeral is set for Tuesday, Jan. 17, 2023, at Beth Elohim Cemetery on Huguenin Avenue in Charleston at 2 p.m. It is open to the public.