The deep crack of outgoing tank fire went through the air again. The 18-year-old in front of me adjusted his body armor as he talked about his parents – they were still in Russian- occupied territory. Freeing them was his motivation to fight. I wanted to know if he was afraid, and he explained that earlier in the war, he was forced to help remove dead bodies. So no, he wasn’t afraid. Death wasn’t foreign to him.

Meeting young soldiers like him the summer following my graduation in 2022 shook me up. Back home, kids his age would be troubled with which major to choose or how to ask their crush out. But his worries were defending his country from an invading military, liberating his parents and not getting killed.

Another deep crack from outgoing tank fire struck the air. No one at the forward operating base really noticed. Generally, you looked for cover only when you heard whistles, which meant artillery rounds were incoming and close.

We left the basement that was the main barracks for the Ukrainian soldiers in that area of the front line. Outside the air was cool and the sky clear. As we walked in the open, my anxiety made me observant. I analyzed the ground to avoid any unexploded ordnance that might be in my path. I also focused on keeping a 5-meter distance from the man in front so we all wouldn’t get hit if Russian artillery started up.

A little over a month before that, I was worried about getting a white tuxedo for graduation at CofC. It was amusing to me how my worries during college seemed small now. But the danger was on me. I chose to work as a war correspondent in Ukraine. In a way, this was like my summer internship. Using OSINT (open-source intelligence), I had reported on the conflict from afar since 2020 for conflict-focused websites and my Instagram account, and then Russia fully invaded. Going to Ukraine was my next step as a journalist. I had contacts on the ground that guided me through the process. They explained press credentials, first-aid kits and the right body armor.

My main concern wasn’t getting injured; it was doing good work. I was scared I would be a liability and an awful correspondent. I didn’t want to be seen as a war tourist. Fortunately, during my time at the College as an English major, I had picked up a good bit of communication and people skills that aided me. We eventually came upon another Ukrainian position. It was also manned by college-aged soldiers. One of them had a vape fastened above his extra magazines. Kids gotta have their vape, even on the front lines in Ukraine. There were many similarities between those young soldiers and the people I went to college with. They were just under violently different circumstances. How alike young people in Ukraine were to me and my peers at home was one of the many things that stuck with me and made me seriously empathetic.

In Kharkiv, there was a café I frequented. Just like at home, the 20-somethings would go to coffee spots like this café to socialize. The only real difference between that café and the ones I frequented in Charleston was the conversations. Talk of weekend plans or general catching up were replaced by discussions on recent missile strikes, battles close by or theories on how the war would end.

The first dead bodies I saw over there were unrecognizable. They had been burnt and then picked over by stray dogs. I didn’t even notice them until a Ukrainian soldier pointed them out. They were Russian soldiers killed when they attacked Kharkiv. But what bothered me wasn’t the sight itself; it was my imagination of who they were. Humanizing them in my mind was the worst part. I thought if I had been born in Russia or Ukraine, I would have likely been a soldier sent to fight in this war. Imagining how I could have been one of those charred and masticated corpses was something I pondered for a while.

Later, I talked to a journalist who had gone to a recently liberated town. He came across a basement stuffed with freshly killed Russian soldiers. Their personal items like family photos and civilian clothes were strewn about. He said seeing pieces of their life was the hardest part because he saw similarities between himself and them.

Even though I spent most of my summer after graduation in Ukraine, I still don’t understand many aspects of that war. But seeing my own reflection in the dead soldiers showed me a shard of its carnage. 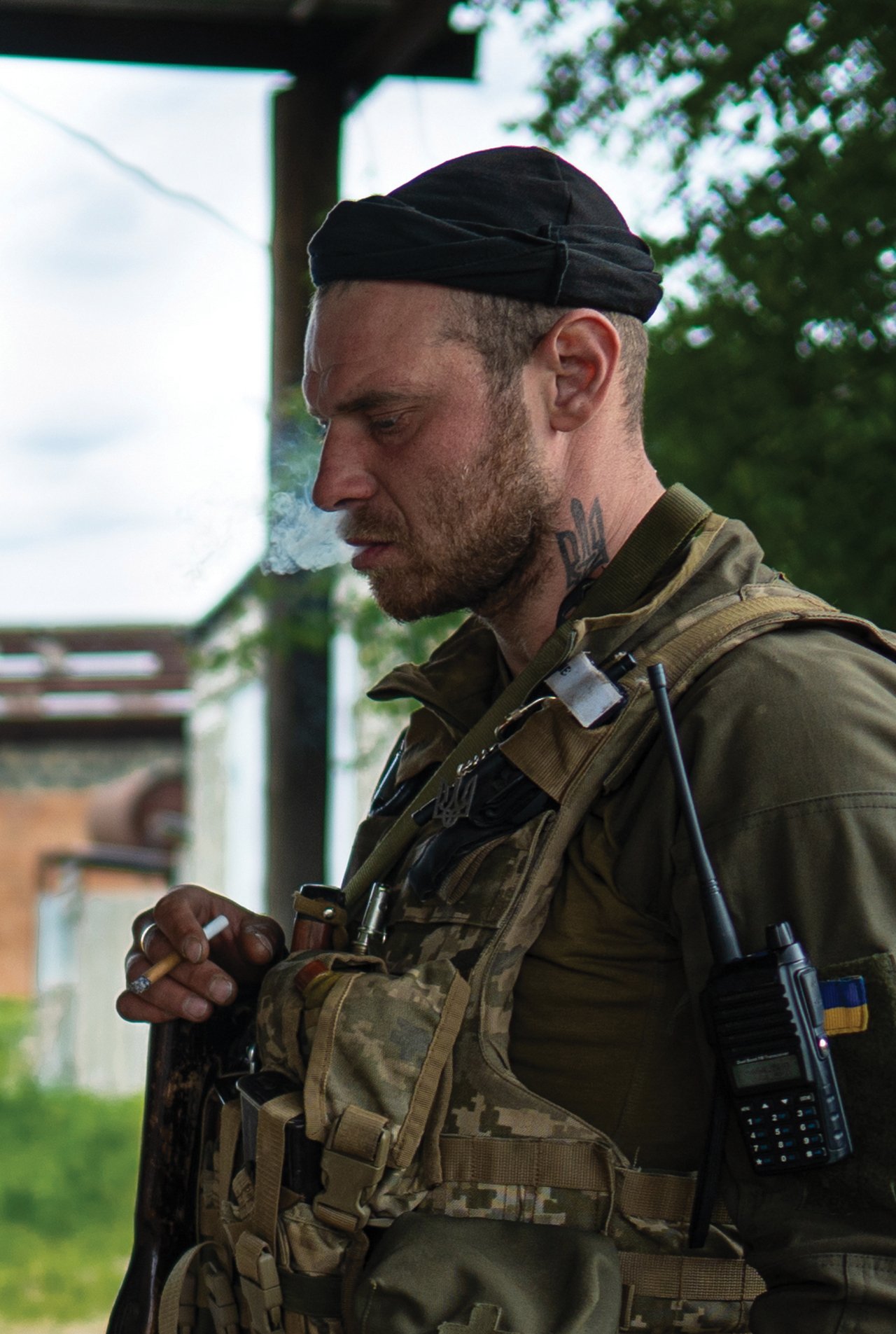 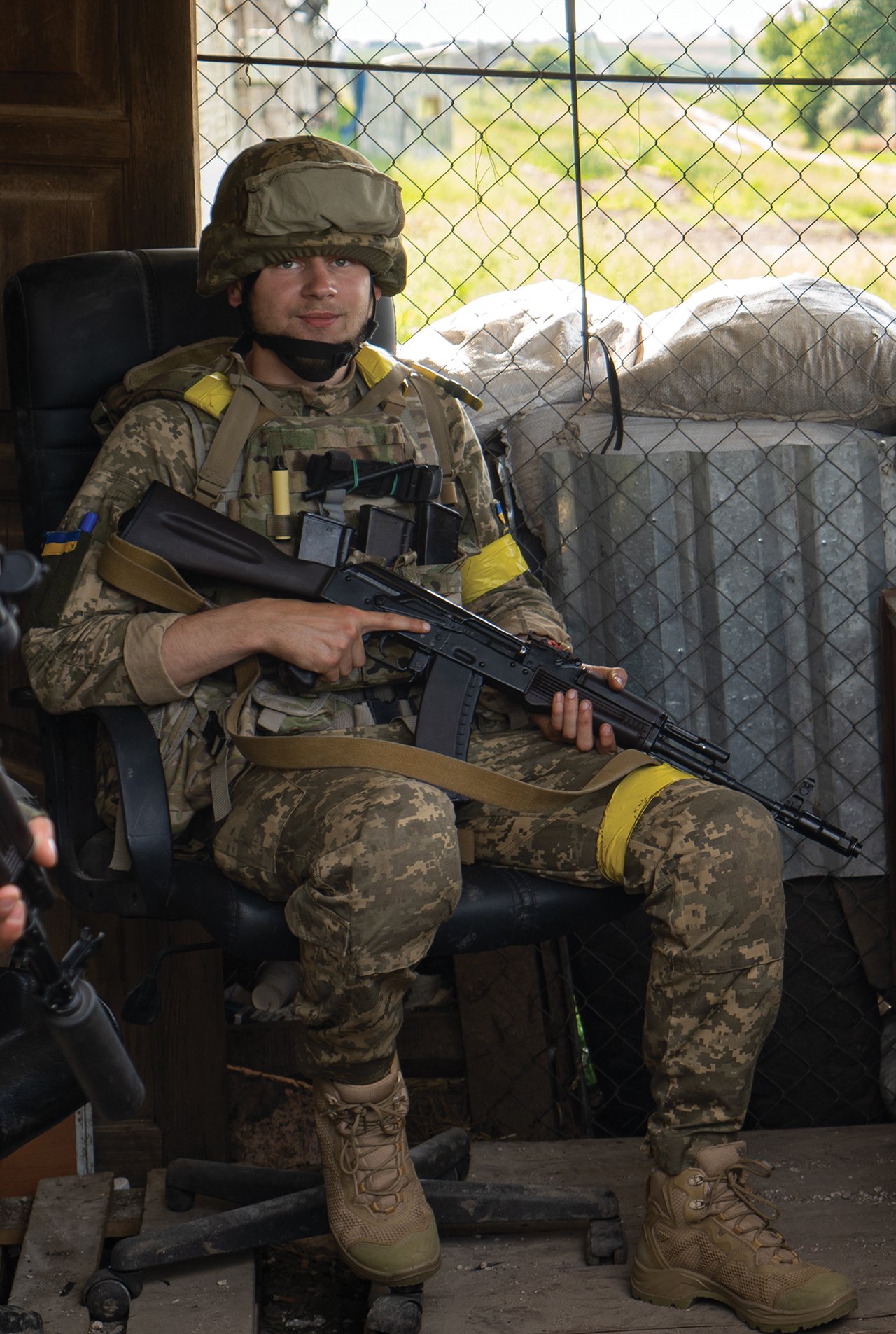 Above: Two Ukrainian soldiers at forward operating bases on the front line near Kharkiv Oblast