Holding Down the Fort

Call it a reverse oasis. At the western tip of the Florida Keys, surrounded by pristine blue waters, lies Fort Jefferson, the largest masonry structure in the Western Hemisphere. The crown jewel of Dry Tortugas National Park, the 165-year-old U.S. naval fortress – built to protect the country’s commerce interests in the Gulf of Mexico – is in a virtually unaltered state from when the Army left it in the 1870s. And historic preservationist Kelly Clark ’00 is making sure the place stays shipshape.

It’s hard to describe Clark’s job with just her title: exhibits specialist. To put it simply, she’s a crucial cog in the multi-year, multi-million dollar preservation project focused on stabilizing Fort Jefferson. She oversees such monumental tasks as replacing portions of the more than 16 million aging bricks that comprise the fortress, reconstructing its massive iron Totten shutters and monitoring the 200-some shipwrecks that rest on the nearby ocean floor.

“So, in a nutshell, I’m a ramrod,” she jokes, adding that – even though she is often overseeing contractors and other National Park Service preservation crews – sometimes she’s out there doing the work herself. “I wear many hats out here, including my hardhat.” 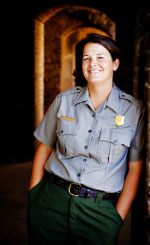 An important part of Clark’s job involves preparing in-depth “records of treatment” for every bit of the stabilization work at Dry Tortugas – from the officers’ quarters and the powder magazines to the lighthouses and the shipwrecks. She chronicles the project in great detail, using both words and photos, to help share best practices in the preservation field.

“The work we are doing now is basically the culmination of about 30 years of work and a number of not-so-great prior phases,” admits Clark. “We have made some huge leaps over the past three years in how we carry out and document this work. That’s why it’s so important we document everything: It will be the blueprint for future preservation work.”

Clark’s own preservation work began at 12 Bull Street, home of the College’s Historic Preservation and Community Planning Program. There, the equal parts classroom-and-city approach, full of walkabouts around Charleston to check out historic buildings, helped Clark prepare for the duality of her work.

“It felt like this vague line between being in school and working as a preservationist out in the city; the professors did a really good job of
getting us out there,” Clark recalls, noting that the program “met all the desires I had: to be outside, active and immersed in arts, architecture, history and a different culture.”

Also, the freedom of a liberal arts and sciences curriculum allowed Clark to explore subjects like drawing and photography – skills she still uses at Dry Tortugas, where some days her best tool is a hammer and others, a camera. One elective class in particular – history professor Bill Olejniczak’s course on the history of technology – has had a lasting effect on her, keeping her attuned to the most modern tools out there.

“Even though my job is to preserve the past, I’m totally hip to modern tech,” quips Clark.

Fort Jefferson itself was once considered modern – at least at the time it was built. Its structural features were on the cutting edge of military fortification architecture, and its armaments were some of the most technologically advanced systems of the day.

“Unfortunately, these same features that make Fort Jefferson so unique are directly contributing to its structural failure today. So, the challenge from a preservation perspective is how to mitigate this condition,” says Clark. “I’m really proud to be a part of this and can say that I truly believe we have implemented some best practices that have really raised the bar.”

Indeed, the time Clark has spent at Dry Tortugas National Park is a definite bright spot in Fort Jefferson’s history. You might even say the structure has found its own oasis in time.