Written in the Stars

For decades, college students have scrawled their names on the walls of the old observatory atop Randolph Hall. Little did they know that their playful vandalism would leave an indelible mark in the College’s signature history.

Bill McSweeney sat on the brownstone steps of Randolph Hall, softly singing the old song. It was a gorgeous day in May, and mercifully cool, at least by Charleston’s springtime standards. Little birdies were indeed about the College, though their melodies didn’t have much time to harmonize with McSweeney’s short vocal performance. It lasted all of 10 seconds, which might qualify as a full concert for a history professor.

McSweeney was contemplating the motivations of generations of College students who had scribbled their names inside the old College observatory, which sat 50 or so feet above his head, atop Randolph Hall. If you’ve never visited this observatory, you’re not alone. Heck, most people don’t even know it exists. From the ground of the Cistern Yard, it’s almost hidden from sight, and the old observatory stairway in Randolph Hall was removed decades ago. To gain entrance nowadays requires a tall stepladder, good balance and a shot of courage. Previous experience as a cat burglar or trapeze artist helps, too. 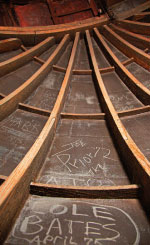 After a few deep breaths, one begins the journey to the old observatory by climbing that stepladder and ascending through a hatch in the ceiling of Randolph Hall’s third floor. Then it’s a vertical climb on another ladder, followed by a twisting walk through the attic on makeshift gangways. The old pine planks you step along are dark and dusty. You must watch your step, or else risk falling down between Randolph Hall’s thick ceiling joists to become encased in fiberglass insulation and perhaps forgotten forever. You must also watch your head, as low-hanging beams threaten to deliver lumps to the skull.

When you leave the planks behind, you climb a small stairway into the domed observatory. It’s small and stuffy – its windows do not open. The circular room feels crowded with just a few people, like too many campers crammed into one tent.

More than a century ago, people visited the observatory to see stars. Now they come to see names. There are dozens of them carved and penned onto the interior of the observatory, along with other graffiti, some of it dating to the late 19th century. Most of these marks were made by students, ostensibly to record their visit to a secluded space. Names decorate the pine wall that encircles the observatory, and they crawl up the domed tin ceiling, too. Some are carved crudely, some inscribed with a great amount of care.

These names were all written by hands – hands that connected to arms, which connected to torsos, heads and hearts that have since moved on elsewhere, whether other parts of the world, or even into death. No matter these destinations, their mark remains in the observatory, for once they were here, tucked up inside a tiny observatory, maybe gazing at the stars.

This compulsion in humans, to make their mark, fascinated McSweeney for the week after he made a visit to the observatory. While inside, he had resisted any urge to add his own name to the wall, yet many others clearly had not. “Why is that?” he asked, after finishing his singing. What inspired students, whether in the 1890s or 1990s, to scratch out proof of their presence in that stifling, enclosed platform above the southern portico of Randolph Hall? 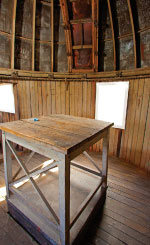 In the mid-1800s, the College observatory was located at ground level on the College Green, or what’s otherwise known as the Cistern Yard. When College astronomers looked skyward, they often saw tree branches in place of stars. In 1872, the College was sufficiently fed up with the constant chore of tree-trimming that it persuaded the Charleston City Council to fund the construction of a new observatory atop Randolph Hall, says adjunct professor Bob Stockton, who researched the College’s observatories as part of a 2006 report on campus buildings. Two years later, in 1874, however, the rotating dome had trouble turning. This problem persisted until a thorough overhaul in 1898, which is about the same time some of the first names started appearing on the interior of the observatory (that is, if we can trust that these inscriptions were indeed made in the year they were dated).

Generally speaking, the earlier a signature was inscribed, the finer the author’s penmanship. In other words, count on cursive after the Gilded Age and chicken scratch in the Digital Age. Among the oldest, most handsomely scrawled graffiti are a number of familiar Charleston surnames, which isn’t surprising considering the College’s history as a municipal college. Speedy Bennett put his name down in one spot, for example, and Jake Pinckney, J.W. Waring (Class of 1900) and R.C. Rhett ’15 all scratched their names there in the early 20th century, too. Martin Middleton wrote his name twice, in June 1914 and January 1922, but still fell short of the record set by C.E. Devineau ’24, who scrawled his moniker three separate times: in 1922, 1923 and 1924. Another Charlestonian and one of the College’s early female students, Marjorie Peale ’36, put her name on the observatory wall, too. She died in April at age 96 after a lifetime as an English teacher and professor, outlasted by handwriting done some 75 years earlier.

Behind every name is a story, a clue to an existence otherwise forgotten or overlooked. There’s the name of G.A. Byrd ’21, who supposedly owned a shoe store in Greenwood, S.C., in the early 20th century. There’s also the name of R.B. Taft ’23, who became a radiology professor at the Medical College of Charleston, but more famously invented the Radium Hound, a device used to find small (and extremely expensive) bits of radium misplaced by doctors. In a few years during the 1930s, Taft estimated he helped recover more than $100,000 of missing radium. McSweeney ventures that, in a bid to last somewhere near as long as the half-life of radium, these men and the others scribbled their names.

“Somehow,” McSweeney says, “people are searching for a way to make their own short lives longer.” 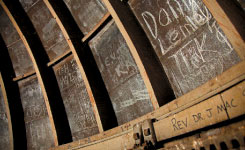 It is an ancient impulse. McSweeney’s friend and campus Egyptologist Peter Piccione notes that graffiti has long been with us, whether used to memorialize, ritualize or amuse. Cave paintings and petroglyphs depict scenes of the hunt. Bored patrons carved gameboards into stone Greek and Hellenistic theaters as far back as 5,000 B.C.E. In ancient Egypt, says Piccione, pilgrims would often trace around their feet with a knife. Stepping back, they’d carve their name inside the outlines of their feet, and sometimes inscribe a small prayer, essentially begging future observers to say a prayer for them and honor their memory.

“So long as you are in the minds of people and remembered, you continue to exist,” says the associate professor of history, summing up an ancient Greek idea.

Piccione notes that Napoleon’s troops were responsible for a conspicuous amount of graffiti during an expedition to Egypt at the end of the 18th century, and that legions of French tourists signed their names in Egyptian temples during the 1930s and ’40s. Three years ago, Piccione began construction of his own temple of sorts – a log home on Johns Island. When the cement foundation was poured, he carved his and his wife’s initials into the wet pad beneath the front steps. In doorway thresholds he wrote prayers, hoping to ward off bad fortune, knowing that all these inscriptions would eventually be covered over, just as his carpenters knew drywall would cover their own scribblings penciled on the
2x4s framing the home’s interior walls. Yet, they also knew that at some future date they could be uncovered, whether because of remodeling, disrepair or disaster. Perhaps those witnesses will stop, read and wonder. Who was here? Why did they write?

In some ways it is a wonder that graffiti persists. So much graffiti in the world is artless, witless and obscene. Yet still, many of us prefer its existence on highway underpasses and bathroom stalls. It is inspiring to know that another life sought to create something in these dingy and bland spots of the urban world. And if not painted over, at some point graffiti transitions from vandalism to relic, as is arguably the case for the names in the old observatory. Hundred-year-old signatures are special, but they weren’t when freshly scribbled. What is that magic number, when defacement becomes delight? For some graffiti, it is a low number, at least when it comes to certain audiences. Piccione, whose hair is now gray, can still recall a sexually explicit (and instructive) image he spied at age 15 when traveling on a city bus in Brooklyn, N.Y. 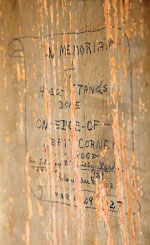 In the old College observatory, there is an absence of such prurience, though mischief is in fair supply. Fraternity members recorded their visits and left instructions on the wall for pledges. Three students carved a scroll into the observatory door in the late 1920s and wrote inside its borders: “In memoriam of headstands done on left corner of roof.” Someone named Mike Smyrski claims he “got high here once.” The accompanying picture of a joint clears up any confusion as to whether Smyrski was referencing altitude or intoxication.

Some graffiti in the observatory is hard to believe. Was there really a “Big Dickie” who signed his name in 1970, or was someone being boastful and silly? Did Joshua Slocum, the first person to singlehandedly sail around the world, really stop and sign his name in 1898? Well, the wall says he did.

And some graffiti, too, is apparently intentionally baffling. In 1975, freshman Peter Daniel climbed up to the observatory and wrote a bit of odd wisdom: “Healthy feet lead to strong minds.” Asked 35 years later about his message, Daniel ’79, now a biology professor at Hofstra University, confesses, “In my 18-year-old mind, I thought it would be really cool to leave a note that made absolutely no sense but would be pondered by others in the years to come. Well, for what it’s worth, it looks like I succeeded, although looking back as a 52-year-old, it seems pretty stupid.”

Daniel is tough on himself, but visitors scanning the observatory’s wall and ceiling for names appreciate the whimsy. McSweeney even believes that all the graffiti could be responsible for the old observatory’s preservation. Without the graffiti lending a certain charm to the structure, he says, the College may have torn it down when they built a new observatory as part of the Rita Liddy Hollings Science Center in the 1970s.

Instead, the old observatory still sits atop Randolph Hall. To some it may be an eyesore, infrequently noticed and representative of days gone by, much like the graffiti it contains inside. In all these things, however, there are messages still to decipher.