Cary Ann Hearst ’01 hadn’t seen it coming. She hadn’t believed it would happen. But there it was: her very own song, her very own voice – and it was coming out of the TV, airing on an episode of the hit HBO series True Blood. It was her big break – her breakthrough into mainstream America’s pop culture. She knew it as soon as she heard it.

She jumped up, “did the get-paid boogie” and headed out to play a gig with her husband, Michael Trent.

“We know better than to assume that any one thing will be the thing that propels us into some kind of superstardom – our career will be a series of breaks,” shrugs Hearst, a Nashville native whose big voice, folksy lyrics, rootsy guitar strumming and energetic boot stomping have been rocking the Charleston music scene for years and are now gathering fans nationwide. “There have been many ‘big breaks’ along the way. It’s an accumulation of all the good things that have happened, combined with how hard we are willing to work and how long we are willing to work at it. The breaks sure make the work easier to do, though!” 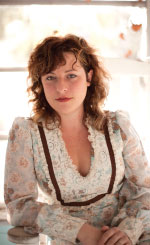 For example, True Blood’s July 2010 episode featuring her “Hells Bells” gave Hearst some great exposure as a solo artist – including an interview on NPR’s Weekend Edition – which has translated into both a boost in sales of her most recent solo release, Lions and Lambs, and some extra momentum for Shovels and Rope, the duo she and Trent comprise.

“It was a great thing, and while it’s not the cornerstone of our entire career, it certainly has proved to be a nice block in the foundation,” says Hearst, who majored in history. “In this business, even the tiniest successes are surprising and thrilling.”

Not that Hearst’s successes have been tiny: In the past year, Shovels and Rope toured with Butch Walker, who also produced Lions and Lambs and whose The Spade she sang on, and with Hayes Carll – whom Hearst duets with in “Another Like You” on his new album, KMAG YOYO (& Other American Stories).

“It was my first track-hire. I was paid to sing on a label-backed record!” gushes Hearst, who – a few months after recording the duet – cold-called Carll’s label to express her interest in touring with him. Sure enough, Shovels and Rope got the gig. “These people have busted their asses to get to where they are, and were very generous to give us the opportunity to use their shows as a platform for ourselves. I would say that we are aspiring to reach the level where Hayes and Butch are, but that kind of thing is a matter of time and determination. It’s not like it happens overnight, over a year; it’s a lifetime of work.”

And Hearst is certainly putting in the effort. She and Trent spent 200 days of 2011 on the road (they travel in The Covered Wagon, a tricked-out 2005 GMC Savana that has a queen-size bed and “looks like a rhino rolling down the road”) and are currently on The Unchained Tour, a “traveling circus of a show” begun by George Dawes Green. After that, they’ll be touring extensively with Johnny Corndawg.

“I really love the freedom and abandon that comes with a career in music. We are wild animals out there!” she says. “I love that it’s my job to entertain people and make them feel good. I love to think that we are part of the soundtrack to people’s lives.”

As for her own life, she seems to have hit just the right note. 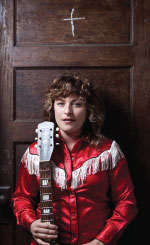 “I am doing exactly what I set out to do from a young age. It comes with its own problems, as does any job or lifestyle, but it seems to be part of what I am destined to do. I can say that my dreams are coming true,” says Hearst, noting that those dreams have evolved over the years. “In my early 20s, I thought more about being some kind of rock star. Now, it’s not that I don’t want to be a rock star, it’s just my idea of what it means to be a rock star is different. Being a rock star isn’t having the great record deal anymore; it’s owning the record company – and, more importantly, the publishing. I want to be the boss, not a star.”

And yet – given Hearst’s talent, spunk and drive – she could very well make it to stardom any minute.

“Although we are resolved that we are making it, every day, just by continuing to work and play – because that’s the dream – I certainly have not ‘arrived,’” she says. “We have high expectations, for our life and for our career. So, while we are very much satisfied with what we have been able to achieve, we want to keep on making it every day.”

In many ways, then, it’s less about the dream than it is about the chase itself … and catching whatever breaks you can along the way.