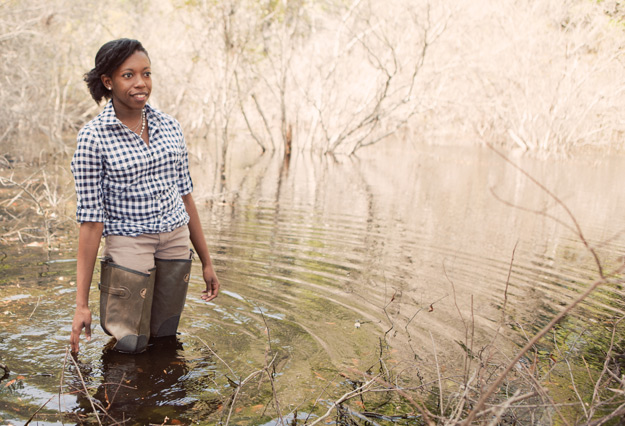 Ah, the five-year plan. It’s the go-to schedule for students looking for a little leeway in their course loads, a little spare time to do … well, whatever it is students do in their spare time. But, for Sylricka Foster, the five-year plan was the only way she could pack in everything she wanted to get done during her college career. Between double majoring in geology and political science, double minoring in environmental geology and Spanish, researching climate change, attending scientific conferences and working for the NASA South Carolina Space Grant Consortium (NASA SCSGC), this rising senior hasn’t had a moment to spare since she came to the College in 2009. Hailing from the small, rural town of Van Wyck, S.C., about 35 miles south of Charlotte, Foster spent her childhood exploring the nearby woods and streams, developing an affinity for nature. It’s no wonder, then, that Charleston’s coastal environment enticed her once she got to the College. “One of my favorite things,” Foster says, “is getting in waders and doing some water-quality testing or water-velocity tests.” Those waders have been getting quite a workout with Foster, who is currently knee-deep studying the effects of pollution and climate change on Charleston-area wetlands. It’s a recurring theme in her research: Using NASA data and GIS software, Foster began studying the potential effects of rising seas on Charleston in the summer of 2011 and, with the help of the Ronald E. McNair Post-Baccalaureate Achievement Program, continued the research the following spring. “Her research significantly furthered our understanding of how hammock islands and wetland systems are affected by a changing climate, specifically sea-level rise. Her work has been nothing less than outstanding,” says geology professor Cyndi Hall ’95, who also serves as the associate director of the NASA SCSGC, where Foster works as a program assistant. There, she has proven herself to be the perfect blend of ambassador and scientist. “She has a passion for outreach, an outgoing personality and a unique knowledge base that is an asset when working with faculty and students at institutions across the state.” Foster is aware that her assets could help bridge the gap that so often exists between science and politics, especially when it comes to issues like climate change. Not one to shy away from controversy, Foster approaches the discord with a can-do attitude and, refreshingly, hope. “With new science comes a lotof debate between scientists and politicians,” says Foster, who was recently accepted into the nationally competitive Minorities Striving and Pursuing Higher Degrees of Success in Earth System Science initiative. “I hope to serve as a mediator or translator between the two parties.” Foster may have her hands full – but, of course, that’s something she’s gotten used to during her time at the College, where her capabilities are no secret. “She’s too busy because too many people want to work with her – myself included – and have her get involved in activities,” says geology professor Timothy Callahan, who counts Foster as one of the best teaching assistants he’s had in 12 years. “Syl handles all this very well and is very charming and easy to like. We’re very fortunate to have her.” And for five full years, at that!