It’s not even spring yet, but most college seniors are firmly focused on post-graduation employment. For them, the most influential narratives can sometimes be closer to home than they might think. That’s how the College’s Department of Computer Science sees it, and that’s why faculty here have been orchestrating their alumni symposium for the past 10 years. 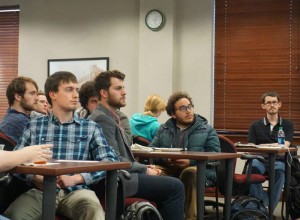 The alumni symposium is a one-evening gathering in which students get to hear a three-minute presentation from each of the alumni invited to be on hand. They benefit from insights and advice on topics that include career opportunities, graduate school and how to navigate the tricky waters of launching a startup. Afterward, there’s a reception. But this event isn’t just a chance for students to do some pre-graduation networking, says computer science professor Jim Bowring. It’s also an opportunity for them to learn firsthand about the variety of pathways that are available to them in the working world.

Bowring, who has been managing this event for the past nine years, says: “This symposium presents a really important opportunity for our students. They get to hear from and meet alumni who work in various industries in a variety of roles, and even a few who are in graduate school programs. All of this takes place in a relaxed setting without the stress that customarily accompanies conventional job interviews. Often times our students come away with a job connection.”

Bowring says that the department purposely holds the symposium immediately prior to the College’s career fair so that students can use it as a means of preparing themselves to get the most out of that fair. 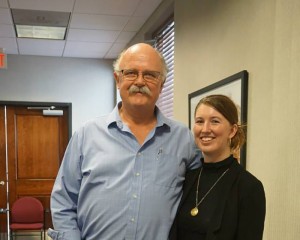 “This year will be special,” Bowring says. “Since it’s the tenth anniversary of our symposium, we are deliberately featuring one alum from each graduating class over the past 10 years.” He says the presenters include a senior data scientist, an interactive computing professor, a site reliability engineer for Apple, an algorithmic trader, a chief technology operator at a start-up and a developer consultant, among others.

The Department of Computer Science Alumni Symposium takes place Friday, March 18, 2016, at 4:30 p.m. in Room 129, or auditorium, of the College’s School of Sciences and Mathematics Building at the corner of Coming and Calhoun streets. It will be followed by an alumni social at the Carolina Ale House.