Final exams in college: everyone is wary of them. But not the students in Morgan Koerner’s German theater course. Every two years, Koerner offers a course that culminates in a live performance in German, and this year was no exception. The students of German 468 recently performed “Dada siegt! Dada scheitert! [Dada wins! Dada fails!]” for a standing-room-only crowd in the College’s Wells Fargo Auditorium this week. 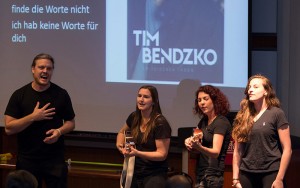 “In my experience, the final public performance is a tremendous motivator for students to gain a better understanding of the material, improve their German and overcome their own inhibitions and become more confident speakers,” said Koerner, associate professor and chair of the Department of German and Russian Studies. “I am still riding a wave of euphoria from this week’s show. The students, German majors and minors with little to no acting experience, were simply amazing.”

This year’s show was a 60-minute, cabaret-style performance of different scenes that reflected the course readings on German Expressionism and Dadaism, the latter of which celebrates its 100-year anniversary this spring. Over the course of the first nine weeks, the students worked through the readings and completed creative writing, directing, and acting assignments. After spring break, they revisited their work and selected “numbers” for the performance, including Expressionist and Dadaist poetry, two “trailers” for film versions of an Expressionist short story, a “Dada soirée,” and a 20-minute version of Georg Kaiser’s 1916 play From Morn to Midnight that included their own associative riffs on and critiques of the original play.

The packed audience guffawed and applauded throughout the performance, willingly participated in a “Dada symphony” of improvised sound noises and broke into a standing ovation after the performance’s anarchic conclusion. As one audience member, German 201 student Gabriele Stahnke, summarized: “When the show opened with a humorous reenactment of the poetic crisis of language, I was already almost in tears laughing. When the actors jumped up on the tables, I was in shock. And when the troupe took their final bow I was saddened, saddened to watch such a great show come to its close.” 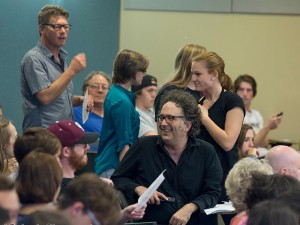 After the show, the students who performed spoke highly of the show as both an educational and transformative experience. Leah Knappertz, a sophomore German major, pointed out that “acting out what we learned in class really helped me to understand what we were actually reading. It was so helpful too because this type of art wasn’t meant to be studied in a traditional classroom setting, it was meant to be taught in an active environment.”

Bradford MacGillivray, a senior international business major and German minor agreed. For him, the approach of learning-by-doing led to insights he would have otherwise missed: “I saw the 2013 show before I enrolled at the College. I had no context, and I didn’t know what to expect then. Now, participating in the class has allowed me to make sense of this puzzling kind of theater, and to realize that there really was a rhyme and reason to it all.”

Alexandra Harrell, a double major in international studies and history and a double minor in German and French, described the transformation that took place during the semester: “Towards the beginning of the semester, most of us were really unsure about acting and the whole idea of performing in front of a large audience. At the end, all of the us came out of the comfort zone and everyone truly gave it their all. Plus everyone’s German improved and everyone gained more confidence speaking German out loud. From just one class, we formed great, and hopefully long-lasting friendships! It was probably one of the most formative moments of my college career and I’m sad that it’s coming to a close.” 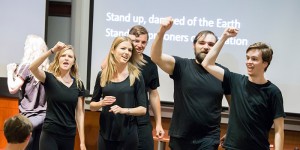 Students in German 468 entertain as part of their final project for the course. Photo credit: Daniel Delgado Diaz.

With praise like this and such a well-visited and celebrated performance, students are already asking when the next course will be.

Koerner just smiles at the praise: “I hope to do this every year in the near future, but right now spring 2018 will be the next date. And 2018 will mark the 100-year anniversary of the German revolution of 1918-19, and the 50-year anniversary of the events of 1968 in Germany, so I’m pretty sure I won’t be able to resist doing a theater course on revolution and political theater.”