In Praise of Two Wheels – Bicycle Commuters Thrive at the College

If you’re an avid bicyclist, you already know that May is National Bicycle Month. But did you also know that Friday, May 20, 2016, is Ride Your Bike to Work Day? At the College, bicycling is popular; so popular in fact that a fair number of faculty and staff already commute by bike. In honor of this month’s focus on bicycling, here’s a quick look at some of our more dedicated bike commuters. 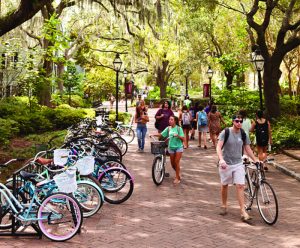 Everywhere you look on campus there are bikes.

Meet Claire Curtis, political science professor and longtime bike commuter. Curtis has been making her way to campus via bicycle since 1998 when she first began teaching at the College. In fact, she says that she has never had a parking permit here. Curtis and her husband, Larry Krasnoff (a philosophy professor who also commutes via bike), live about eight blocks from the College, and most days each week they arrive on campus by pedaling.

Then there’s longtime bicycle commuter Martin Jones, who teaches math and statistics. In 1997, Jones sold his car before going away on sabbatical and has been car-free (“care-free,” he says) ever since. 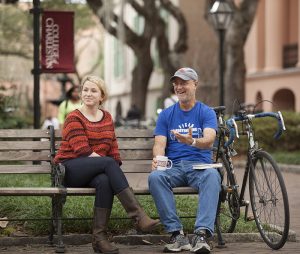 “I only live five blocks from campus now, so it’s a pretty easy commute by bike,” says Jones. “But I lived on James Island for a while last year and that was more of a challenge riding over the James Island Connector. I’m glad to be living back downtown.”

Jones also notes the economic advantage commuting via bicycle, and the fact that he doesn’t have to look for – or pay for – parking. “I also feel that I have a more mindful commute than if I were driving.”

If you’re in the habit of observing cyclists around campus, you’ve probably seen Erin Perkins ‘08 (MPA), who works in the College’s Division of Marketing and Communications. She commutes from her downtown apartment to campus on her classic 15-speed. Perkins used to commute by car, but in 2010, she sold her vehicle and made the move to two wheels. 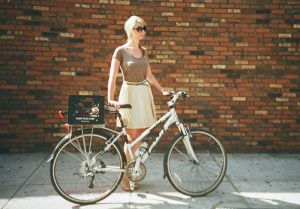 Erin Perkins and her classic 15-speed. (Photo courtesy of charlotteelizabethphoto.com)

“It’s so much more affordable, and so much more convenient and pleasant to have a bike downtown instead of a car. I can pretty much get anywhere I want to go on the peninsula in about 10 or 15 minutes. And, except for a few restrictions on King Street, you can essentially park anywhere without a problem. It’s also really handy for getting to appointments or meetings across town, or simply meeting friends out somewhere.”

And then there’s Becca Diamond, who is a program director for the Jewish Student Union/Hillel. Diamond grew up in a cycling family, in fact bicycling is how her parents met. Though she’s only been working at the College for less than a year, Diamond says that she’s been a committed bicycle commuter most of that time.

“It took me a couple weeks to buy a bike and get it fixed up, but I’ve biked to work almost every day since I started here last August,” says Diamond. “The only times I don’t ride my bike are when it’s raining heavily and flooding, in which case, I walk.” 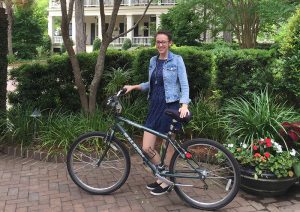 Becca Diamond and her trusty steed.

Diamond only lives about 15 blocks from campus.

“When I was looking for an apartment here, I specifically wanted to live somewhere within biking distance because I enjoy it so much,” she says. “When you drive, you have to deal with traffic and parking, and I love getting exercise on my bike, particularly considering that I sit in an office most of the day. Also, it gives me a lot of freedom because downtown Charleston is so accessible by bike. You can zip around downtown without feeling encumbered by your car. Ultimately, if you take traffic and the time it takes to find parking into account, biking is probably just as fast as driving.”

When some of her students learned that she biked to work all winter long this year, she says they were bewildered. “I’m from New Jersey, and I would always have to put my bike away when there was ice on the ground there during the winter, but in Charleston, I love that I can bike year-round and I can depend on my bike as a way of getting to work.”

Want to find out more about campus biking? Check out the College’s Bike Share program. And, if study or work at the the College, check out this web page maintained by the College’s Office of Public Safety. It will help you find out about bicycle regulations in Charleston and the benefits of registering your bike with that office.