Anyone who has ever wandered along its cobblestone streets can tell you: Charleston has an aesthetic like few other cities in America.

But there’s no one architectural element that makes Charleston unique. It’s the pastel facades of Rainbow Row, the elegant piazzas and porches that seem to invite guests for a sit, the live oaks that provide shade over the College of Charleston’s Cistern Yard and the eclectic mix of shops that dot the city. Even public policy plays a major role in the look and feel of the city. Nathaniel Walker, assistant professor of architectural history, speaks during a tour of the Gaillard Center in February.

It’s that rich patchwork — and the modern mix of large, bland structures that have degraded the character of parts of Charleston and other cities throughout the nation — that led assistant professor Nathaniel Walker and others in the College’s Department of Art and Architectural History to create a graduate program in urban design, which, pending SACS approval, is scheduled to begin in Fall 2017. Walker says the new program aims to teach students the intricate lessons of well-designed cities such as Charleston, so they can export them to other metropolitan areas around the country.

“We will teach students the lessons of Charleston, for the benefit of our city, and to serve the rest of the world,” says Walker.

Walker says the new master’s program was actually launched in direct response to public outcry over the rise of “very large and very mediocre” buildings throughout the Charleston peninsula. The City’s Board of Architectural Review hired famed architect and urban planner Andrés Duany to help create new policies to quell concerns over the mass of new buildings.

“He made the great point that Charleston is absolutely full of great architectural accomplishments and should thus avoid importing bad architecture,” says Walker. “In fact, we should be exporting good architecture.” Dignitaries from around the world visit the Gaillard Center as part of a tour led by Walker and professor Richard Gilmore earlier this spring.

The proposed new program will delve into a complex mix of issues impacting American cities from historic preservation and sustainability to public policy on urban planning and economics. Walker says that students in the College’s urban design program will learn to embody a “progressive traditional” ethos that will help them carry historically sourced design forms, materials and aesthetics into contemporary buildings.

“A vast majority of other programs teach the opposite, insisting that new buildings must reject, sometimes violently, the character of old neighbors,” says Walker. “This is irrational, even silly. We will not be silly.”

An example of such “progressive traditional” design can be seen just a few blocks from campus in Charleston’s Galliard Center for the Arts, says Walker. The center mixes classical architecture reminiscent of the city’s cultural heritage — including the important contributions of African and African-American Charlestonians.

Walker and Richard Gilmore, professor and chair of the College’s historic preservation program, talked about the Gaillard Center and other buildings throughout the city as part of a walking tour earlier this year during an international workshop with the National Parks Service on the preservation and interpretation of sites and artifacts connected to the African slave trade. 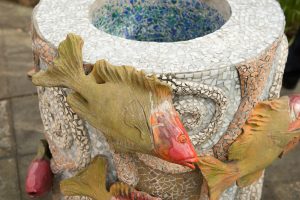 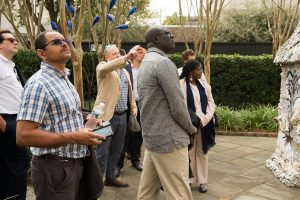 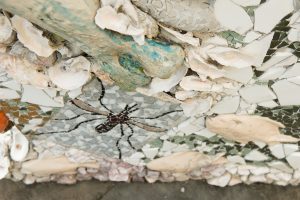 Walker and Gilmore show officials from nations impacted by the slave trade some of the ways Charleston has protected and presented the history of slavery and the African diaspora.

Government officials from several nations impacted by the slave trade, including Senegal, Sierra Leone, Ghana, South Africa, Mozambique, Jamaica, Colombia, and Brazil, followed Walker and Gilmore through the city as they highlighted important sites in the city that Walker says “protected and presented the history of slavery and the subsequent generations of defiantly vibrant culture that evolved as the African diaspora spread across these lands.”

Walker says that he hopes his students can graduate from the program knowing how to celebrate the long-neglected contributions of African-Americans and other groups to cities across the country. But he says they must also be able to create the aesthetic, architectural, economic and governmental policies essential to vibrant American cities such as Charleston.