In case you’re completely in the dark about the total solar eclipse that will be visible across a massive swath of the continental United States on Aug. 21, 2017, consider this your fair warning: This event will be huge and historic, especially for population centers along the eclipse path, which includes the College of Charleston campus. 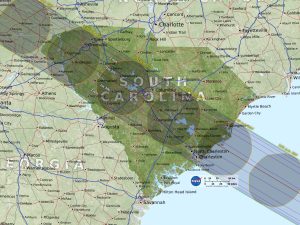 This map shows the “band of totality” over South Carolina. The total solar eclipse will be viewable from anywhere within the band. The duration will be longer for areas nearest the center of the band. NASA image.

In fact, most of the Lowcountry (which includes Charleston, Berkeley and Dorchester counties) is within the so-called “path of totality” that will go completely dark from anywhere between one and a half to two and half minutes, depending on location, as the shadow of the eclipse travels eastward.

“We will experience it around 1:10 p.m. as it starts going into partial eclipse with totality in Charleston at about 2:40 in the afternoon,” says Associate Professor of Geology Cass Runyon. “It will be traveling across the U.S. at about 1,000 miles per hour.”

Although portions of the U.S. experienced total solar eclipses in 1970 and 1979, they were visible from only a limited number of states. The eclipse on March 7, 1970, was seen along much of the Eastern seaboard and plunged Charleston into darkness for about one minute and 44 seconds. 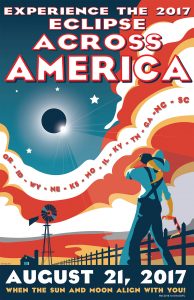 Eclipse Across America poster from NASA.

But a total solar eclipse has not gone coast to coast since June 8, 1918. Fast forward 99 years to this summer and you have all the makings of a major international event right in the College’s backyard.

Considering Charleston’s status as an international tourism destination and the fact that Charleston is the last major city along the path of the eclipse, Jon Hakkila, CofC professor of physics and astronomy, expects Charleston to see a major influx of visitors for the eclipse, particularly as people opt to turn their viewing experiences into vacations.

“The viewing band runs all the way from Oregon to South Carolina – coast to coast,” says Hakkila. “Everybody in the (Charleston area) is going to see it. You can’t miss it – it’s very rare.”

Indeed, hotel bookings are up and area organizations, governments and institutions are planning special viewing and educational events. Local school districts have even adjusted their academic calendars to accommodate the eclipse.

The College will be providing CofC-branded eclipse viewing glasses to the campus community this summer.

The College’s annual convocation, where new students are officially welcomed into the College, also happens to fall on the same day as the eclipse.

Convocation will take place as scheduled from 9:30 a.m. to 11:30 a.m. This means that students in the incoming Class of 2021 will have the very special distinction of launching their academic journey on the same day as the historic eclipse. Talk about an unforgettable first day of college!

The Division of Student Affairs is planning an exclusive viewing event for the campus community on Rivers Green from 1:30 p.m. to 3:30 p.m. on Aug. 21. A variety of activities, displays and refreshments will be available to help celebrate the momentous occasion. In addition, the College will be providing custom-designed CofC eclipse viewing glasses to members of campus to ensure everyone protects their eyes while viewing the sun as it transitions. NASA TV will be anchoring its national broadcast of the eclipse live from Rivers Green. The campus event is not open to the public.

CofC professors from the Department of Physics and Astronomy and the Department of Geology and Environmental Geosciences are in high demand for the eclipse. In addition to serving as narrators and experts at a number eclipse events, faculty members will also be conducting research on various aspects of the eclipse.

Check back with The College Today all summer as we share stories about how our faculty, staff and students are planning for the big day.