Jordan Collins and Zach Sturman have been exceptional students at the College of Charleston.

Both are graduating from the College this weekend and have been named the recipients of the CofC’s highest, most selective honor for undergraduates — the Bishop Robert Smith Award. 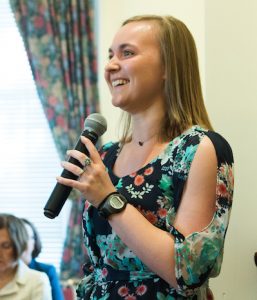 Jordan Collins, a graduate of the Honors College, speaks at a College of Charleston Board of Trustees meeting in mid-April. (Photo by Reese Moore)

Collins, an exercise science major with a 4.0 GPA and a member of the College’s cheerleading squad, was recognized for academic excellence and outstanding leadership.

She not only made the Dean’s List each semester for the past three years, but served as a tutor in the Center for Student Learning, assisting other undergraduates with their studies in biology, anatomy, physiology and exercise science. She also served as a teaching assistant in a biomechanics course. 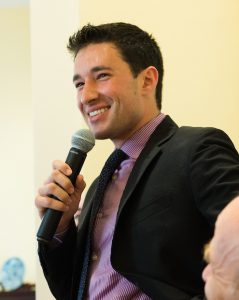 Zach Sturman, an Honors College graduate, speaks at a Board of Trustees meeting in mid-April. (Photo by Reese Moore)

Sturman, a double major in political science and Spanish with minors in astronomy and economics, also maintained a 4.0 GPA. He spent several years working in the College’s Student Government Association and was the body’s president during the 2015-16 academic year. He was a Harry and Reba Huge Scholar, a William Aiken Fellow and an intern for the federal State Department in Estonia, among other distinctions.

At a ceremony in mid-April, both Collins and Sturman were presented with their plaques and a monetary award. Also honored in that ceremony were the recipients of the Ted Stern Cup and the Alexander Chambliss Connelley Award.

Ted Stern, who served as President of the College from 1968 to 1978, encouraged others to lead by example. And that’s just what Emily Beck and Erik Markert have done. Both students will also walk across the Cistern this weekend. 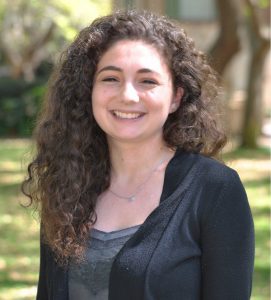 Beck, a psychology major with an interest in clinical research, served for several years on the Cougar Counseling Team. She was also a member of the College’s Honor Board, as well as a peer facilitator and peer academic coach in the College’s Center for Excellence in Peer Education.

Markert, a double major in finance and economics, was a Schottland Scholar and member of the School of Business’ Investment Program. He had several internships, including one with the College’s Office of Admissions and was captain of the College’s men’s crew team. 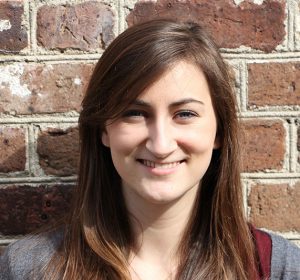 At that same ceremony in April, Morgan Larimer was presented with the Alexander Chambliss Connelley Award, which also comes with a financial prize. That honor is bestowed each spring upon a member of the senior class who has made the most selfless contribution to the student body and the College of Charleston.

Larimer, a double major in international studies and biology, with a minor in environmental and sustainability studies, rose to the top in a very competitive pool of nominees. During her time at the College, she touched many lives, and served as a member of the ECOllective Student Project Committee within the Office of Sustainability.

Larimer, who is also graduating this weekend, also worked as a student researcher at the College’s Grice Marine Lab and served as a vital member of the Student Advisory Subcommittee for the College’s new Quality Enhancement Plan. Her nominator wrote “there is not one student who has not been impacted by Morgan’s actions and future generations will likewise reap the rewards of her sustainability and other efforts.”

Read more about the College’s top awards and to see past recipients on the Office of Student Affairs’ website.

Featured image shows Zachary Sturman, Emily Beck and Jordan Collins at a Board of Trustees meeting in mid-April. (Photo by Reese Moore)