Watch live coverage of the regatta, with color commentary from CofC alum Brooks Clark ’13 in the live video above.

The College of Charleston’s Sailing Program is hosting the three major national championship regattas this week and next, and there is a lot more at stake than just trophies.

Teams representing some 40-plus universities and colleges from all across the U.S. (and one from Canada) are descending on Charleston to compete in collegiate sailing’s three-part finale. This 11-day event includes the Sperry Women’s Championships (May 23-26), the Laser Performance Team Racing Championships (May 27-30) and the Gill Coed Dinghy Championships (May 31-June 2). Racers from the College’s varsity sailing team tune up against each other in advance of the National Collegiate Sailing Championships. (Photo by Reese Moore)

“We’re very honored to be hosting these prestigious events,” said Greg Fisher, the Director of Sailing for the College. “It’s not only an opportunity for our program to showcase its deep talent and impressive facilities, but it’s also a chance for our sailors to see what it takes to run a major national event as well.”

Fisher explained that nearly 50 student-athletes from his varsity team will be on hand for the event. Though only a dozen or so of them will actually race, the rest will provide vital assistance in helping to manage the event.

“There are so many moving parts when you stage these regattas,” he explained, “and our team members will be pivotal in making it all happen smoothly.” Fisher explained that the base of operations for all three events will be the USS Yorktown, the retired U.S. Navy aircraft carrier that is berthed adjacent his program’s sailing center at Patriot’s Point on Charleston Harbor. “With almost 400 sailors and coaches attending, and some 300 to 400 spectators expected each day, we need a space that’s larger than our sailing center in order to stage these regattas.”

Among the key duties that Fisher’s sailors have played in the days leading up to the championships is that of sparring partner. “We’ve got a very deep team with nearly 70 sailors in all, so we’re able to assimilate the conditions that our racers will face during the nationals because we practice with 18 boats on the water.”

Mitch Hall, who coaches the College’s Women’s Sailing Team and serves as an assistant coach for the rest of the team, has high expectations. “We race and practice on the harbor every day, so our sailors know these waters well,” said Hall. “The last time the College hosted the nationals, we won the coed national regatta. And because Charleston is a challenging place to sail, we’ve got a great advantage in being able to compete on our home waters and then go home each night and sleep in our own beds.” Hall identified several other factors that may benefit the Cougars. “All of the teams participating have just come through a long spring season, and it’s really important to pace yourself as a team so that the sailors peak at just the right time. Because we’ve got such a large team, we’ve been able to rest some of our sailors along the way and make sure that everyone is totally fresh and 100 percent ready when the championships start. Despite facing some adversity this season, and suffering a few injuries, our women’s team is looking strong and I feel confident we’ll be among the top five competitive teams at this event.”

Regarding the team racing and the coed regattas, Hall said his expectations are equally high. “I think we’ll have a bit of an edge over many of the other teams because we’re so accustomed to sailing in Charleston’s tricky currents. For those teams that don’t customarily race in current, it’s going to be a huge factor. In addition, the teams from the Midwest and New England will have to adjust to sailing in the heat and humidity that we have here, so the weather will be another factor that may give us an advantage.” Members of the women’s team hone their upwind technique in preparation for the College Sailing National Championships. (Photo by Reese Moore)

Another big factor expected to influence the Gill Coed National Championships is the fact that this culminating event follows on the heels of two other taxing regattas.

“It’s tough for the racers to stay focused after getting through the other two events,” Hall explained. “And that’s where the advantage of having a deep team comes in. These past few weeks, our team has continued to work on physical conditioning in the morning and then on-the-water skills and strategy in the afternoons, so we’ll be completely ready. Our plan is to sail really well on the first day of the Coed Nationals, which will be the semi-finals, and then rest our best sailors so that they’ll be really fresh for the finals.”

Hall noted that the Cougars have historically done very well in these events, with plaques commemorating 20 national championships adorning the walls of their sailing center. “The team members know that the alumni and spectators and supporters will be following these regattas closely,” he said, “so the sailors will have that motivation in the back of their minds. I would say that there’s definitely an element of pride at stake for us.” 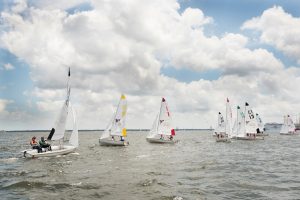 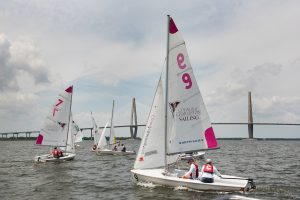 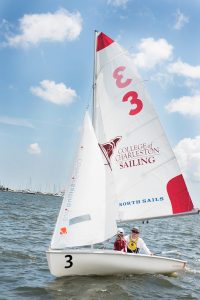 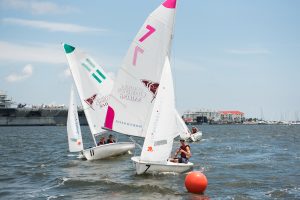